Flexibility with channel count
Increased performance and lowering of ADC prices have also allowed the individual channels on a DAQ system to have their own ADC, rather than sharing a single ADC amongst different multiplexers, thereby making DAQ systems more granular in their channel count.

Such modules are designed to work with a specific signal type and provide a dedicated ADC on each channel, this facilitates lower channel count modules and devices, which you can group together to develop a custom DAQ system with the exact channel count and mix to fit a specific application need.

Larger share for PXIe, AXIe and even USB buses
Although the commonly used platform for modular systems is PXI, but it is not the only modular platform solution available in the market. Other platforms, such as AXI, give you a larger port size, which is about four times of PXI. This allows you to put much more complex hardware and circuitry on the AXI platform.

USB is a very interesting product for DAQ systems. Providing added functionality for DAQ, compared to plug-in PCI bus devices, USB offers additional benefits such as auto-discovery, set-up and the ability to locate the device up to 5m from the PC with a standard USB cable. It improves both ease of use and flexibility. The bus apportions up to 60MB/s of bandwidth, and signal streaming technologies have ensured the simultaneous operation of multiple DAQ data streams.

Most of the USB DAQ systems are standalone cards, which can directly work with a PC without a mainframe. Interestingly, the same card can be put into a chassis and then used as a modular system, where you can club different kinds of cards together or club multiple cards of the same type together to increase the channel density. You can use it as a standalone card if you are looking for only a few channels, or if you are looking for a higher channel density, the same card can be inserted into the chassis and then it can be controlled via a host PC.

Wireless approach is growing
While handheld computing platforms with USB interfaces are popular, newer versions having wireless communication have been developed. Designed for remote monitoring, operation and control of the system, these mobile computing devices are proving to be game changers for wireless DAQ systems.

Wide adoption of high-speed continuous transmission standard IEEE 802.11 (Wi-Fi) in mobile computing applications has forced DAQ system vendors to improve the industrial ruggedness of Wi-Fi products. The economies of scale, reliability and ease of use of Wi-Fi make the technology appropriate for integration with DAQ systems.

Additionally, significant enhancements in the security and reliability of Wi-Fi networks, with technologies such as WPA2 data encryption, have contributed towards Wi-Fi being seen as the next promising technology for DAQ. Also, the seamless connection of Wi-Fi access points to Ethernet-based DAQ systems is adding to their utility.

Also, there are different kinds of batteries available for the Wi-Fi DAQ devices with single use and rechargeable options. While the modern devices are designed to last a full day on a small to moderately sized battery, for longer applications batteries with recharging options (such as with a solar panel) are also available.

More field-programmable gate arrays in DAQ system
Field-programmable gate arrays (FPGAs) have made their way to DAQ systems for in-line signal processing and data reduction. This has resulted in more intelligent DAQ systems, which you can program with various available software tools to process acquired data on the device without having to transfer it over a bus to the PC processor. When it comes to high-end measurement applications involving immediate processing on the incoming data, on-board FPGAs come into play. 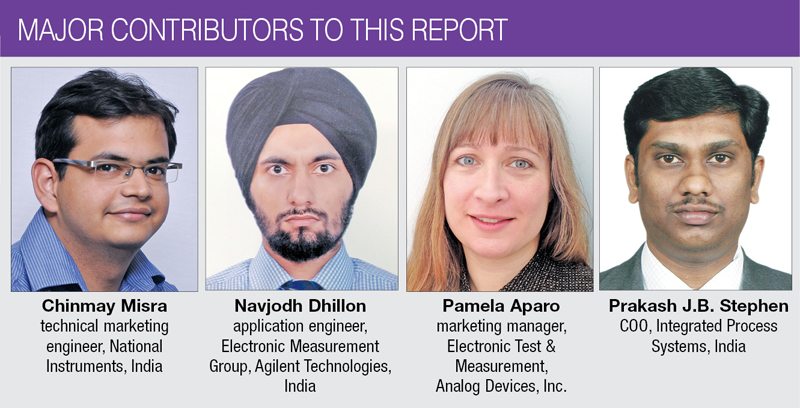 Also, the software tools for these programmable solutions with pre-defined as well as custom algorithms are leveraging the FPGA technology. This enables user-defined control, sensor simulation, digital protocol emulation with flexible and precise timing and triggering, allowing you to configure hardware and make deterministic measurements and control.

Owing to their intelligence and flexibility, these devices can be ideal solutions for custom DAQ requirements, embedded applications and development and testing of custom digital interfacing. As technology advances, the price/performance evolution curve of FPGAs will continuously improve, and also with various software and tools easing the programming of FPGAs, we can expect the integration of FPGAs on DAQ systems to continue to expand.

DAS becomes more affordable
As far as a measurement system is concerned, we cannot say that the prices decrease sharply. But due to a growing processing capability, you can get more processing and measurement capability available for the same amount of money you spent before.

Following the trend of other semiconductor technologies, modern-day ADCs have significantly reduced costs. Today, we have advanced integrated ADCs with faster conversion speeds, higher resolutions, at an order of much lower price than what was previously available.

The price decline has contributed to the integration of signal conditioning features on DAQ systems for the improvement of safety, accuracy and ease of use. ADCs with 16-, 12- or even 10- and 8-bit resolution are available depending upon what requirement you are looking for.

A very important thing that has to be kept in mind is, a lot of instrument functionality controlled by the software that you use to control these equipment, and with the PCs becoming affordable and powerful, you are able to use the equipment to a much more extent than ever before. So, as a user, your overall cost for DAQ still reduces because PC still owns a larger part of your system and you are getting much more value for the money you spent.

Frankly speaking, you will not see a drastic drop in DAQ systems’ cost like you see in consumer electronics. However, if we see overall value for money, we can see a drastic change in terms of processing, power and measurement capability. Vendors such as Measurement Computing Corporation have lowered the cost of DAQ by bringing out inexpensive USB-based versions that can sample at 500kS per second for under US$ 200.

Future
We can see that the technology advancements in the broader computing and consumer electronics sector will continue to leverage and benefit the future DAQ systems. We can expect to see continued growth and adoption of USB, more integration of signal conditioning and added flexibility with on-board programmable FPGAs on DAQ systems. With increased modularity and granularity, the next-generation interfacing and integrated wireless capabilities, one can look forward to the development of more advanced DAQ in the near future.

Another area which most of the companies are eyeing for future is Cloud-based DAQ. The applications are already developed and available for various popular operating systems, such as Android and iOS, for remote DAQ with handheld devices allowing you to see the sensor data and providing you the ability to control various parameters, and also log the data onto the system. Working in a seamless environment provides users the ability to access their data from anywhere, further increasing the flexibility and utility of the systems.

The author is a technical journalist at EFY