What is New in the Humble Signal Generator

In this story, we focus on features in today’s signal generators that play an important role in testing the devices we use on a daily basis, and also learn how new technologies in signal generators are helping engineers optimise their design better

over the years, the software components have become the dominant design factor. Virtually, one can generate any frequency for test purpose as required; and this is the biggest flexibility for design engineers.

Evolution of signal generators
Signal generation tools have evolved over decades from the basic carrier wave (CW) signal generators to complex signal synthesis for the present and future wireless and EW system testing and validation.

With the advent of digital systems everywhere, many of these systems needed to be tested differently with modified waveforms and signals. And this is where modulated signal generators with different types of modulation techniques helped. Signal and function generators are now much smaller in size with jam-packed features whereas they used to be desktop instruments (even today some of them are) a few years ago. So, in short, size has reduced with increase in capabilities.

Creating the modern signal. Today’s signal generators have gone a step further. They can generate virtually any kind of signal. One can simulate the signal in industry leading virtual engineering environment such as MATLAB, LabVIEW or other simulation software. One can also capture off-the-air signals using a combination of software and hardware tools such as vector signal analysers (VSAs) and also recreate these signals using these analysers. 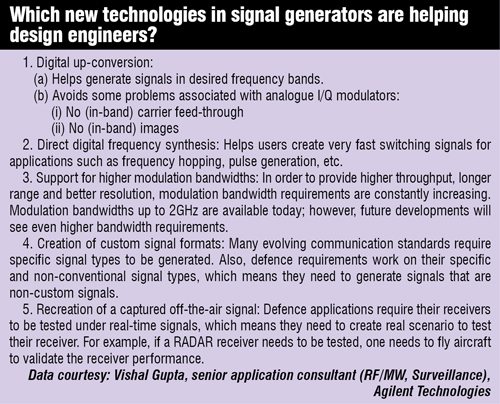 Today’s use of signal generators includes the design, testing and maintenance of systems with complex modulation such as orthogonal frequency-division multiplexing (OFDM), multiple-input multiple-output (MIMO) and radar transmitters and receivers. Modern signal generator’s functionality and performance is enhanced to simulate various blocks of such communication and radar systems.

Stephen Hire, general manager—India, Aeroflex informs that the last year has seen new additions to the WLAN standards including 802.11ac which brings a requirement for very wide modulation bandwidths. He says, “To support this, our latest generators have 160MHz modulation bandwidth and operate up to 6GHz to support the full range of WLAN bands around the world.”

“In terms of functionality, the digital radio, cellular and WLAN industries have driven a lot of changes with current generators needing to support digital modulation techniques and have built-in waveforms for standards such as 3G and LTE. Cellular standards continue to evolve and, although LTE has been around for a while now, design engineers now need to start looking at LTE Advanced as well,” adds Hire.

Ability to test dynamic equipment. The functionality of signal generators was getting defined in software which was good enough for performing test on electronic circuits of the 20th century. “This evolution required a different set of functions to be generated at very different speeds for different kinds of models for different environments,” informs Satish Mohanram, technical marketing manager, National Instruments India.

For environments where equipment functionality is very dynamic, ensuring that the functionality of these equipment gets tested becomes a lot more complicated. One has to basically make the test system behave as if it is the real-world environment for that specific application.

Citing an example, Mohanram explains, “If you consider ECUs, you have to make the environment work as though it is the actual part, be it the transmission, the engine or the terrain on which it is going. This really brings in a lot of complexity into the type of signals that have to be generated; signals have to be generated really fast and change really quick. Software was the key but it was not providing the required speed and functionality wherever it was needed. This moved us into the next generation which is a software-defined signal generator having an on-board signal processing unit.”