How Smartphones, Cloud and Data Analytics are Driving RF Test

To succeed in dealing with the most demanding radio frequency (RF) design challenges, engineers need instruments with the latest technology and capabilities. Here, we take a look at some interesting test equipment for RF applications that have been recently introduced in the market. We also highlight how these tools are enabling engineers solve problems in designs and maintain existing RF systems and infrastructure.

Vishal Gupta, senior application consultant (RF/MW, Surveillance), Keysight Technologies, says, “When you look at platforms to perform wide-band and radar-signal analysis, earlier the widest real-time bandwidth available was 160MHz. Now, there is up to 510MHz of analysis bandwidth available.”

The wide bandwidth range up to 26.5GHz permits accurate measurement of parameters like wideband chirp linearity in advanced radar systems. Engineers can use the intuitive, multi-touch 35.8cm (14.1-inch) display to pinch or zoom signals for better analysis. Based on proprietary technologies, it allows for a deeper analysis of transient, wideband and elusive signals.

Gupta says, “There has always been demand for higher analysis and real-time bandwidth, mainly from aerospace and defence engineers who want to analyse their wide-band radar and electronic warfare and satellite signals.”

He adds, “The introduction of UXG series signal analyser with real-time spectrum capability will bridge this gap.”

Anticipating and fixing problems before these fail your radio system
From police personnel and fire departments to usage in private sector activities such as construction, security and maintenance, land mobile radio (LMR) systems have been extensively adopted for communication between geographically-dispersed teams and mobile personnel over pre-defined frequencies.

Today, LMR is also used by small- and medium-sized organisations to consolidate their business operations. The market is slowly witnessing a growing approval for digital LMR systems and it is also anticipated that its adoption will surpass analogue LMR in the years to come.

An LMR system can be as simple as a base station and two handheld units or as complex as hundreds of mobile units and various other devices. At any level, it is important to maintain and monitor the health of an LMR system and its components.

A new power measurement device launched recently serves the purpose of monitoring the components in analogue or digital LMR systems functioning between 144MHz and 960MHz.

Radio units, antenna, transmission line and power combiner are the usual elements that constitute an LMR. The channel power monitor from Bird Technologies monitors all elements of a radio system with the help of RF power sensors placed throughout the system. Apart from monitoring individual radios of a system, it also measures the system’s total performance.

Engineers can monitor 16 channels, which can be expanded to accommodate new radio systems. They are alerted to measurement parameters such as composite, forward and reflected power and out-of-spec conditions displayed and updated on a dedicated Web page generated by the model 3141 channel power monitor in real-time.

Data can be accessed on computers, tablets or mobile phones, which engineers can interpret to set alarms or configure the system to alert via email in case of failure conditions such as low/high power or poor-antenna voltage standing wave ratio (VSWR). Data logging capabilities further allow an engineer to view degraded performance and avoid emergency conditions. 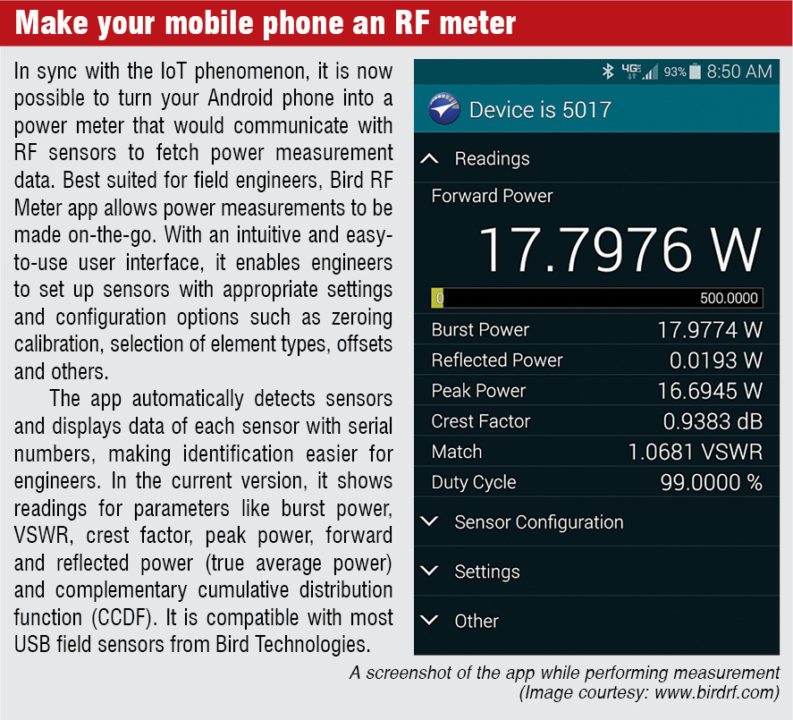 Making RF measurements easier, quicker, more efficient
A notable current trend in network testing is the utilisation of simple, easy-to-use test equipment such that fundamental test behaviour and interpretation is not limited to professional RF engineers. There is also a growing use of analytics and cloud to boost efficiency in using such tools.

In line with this trend, this new analyser from Kaelus, equipped with rechargeable lithium-ion batteries, reliably enables users to measure VSWR/return loss and the position of VSWR/return loss faults in their RF framework, thereby allowing estimation of distance to fault (DTF) in the RF path.

Bluetooth and universal serial bus (USB) capability in the iVA series cable and network analyser provides flexibility in measurement and opens new avenues of multi-port and sweep testing. It also allows engineers to make and view measurements by connecting this rugged device to the Bluetooth interface of a mobile phone, tablet, laptop or personal computer. There is an app particularly available for Android devices to view measurements on mobile devices.

The uncomplicatedness of this device significantly decreases test time on site as the site certification sweep testing process is made simpler. It is possible to directly connect this analyser to the device under test. This handy device can be used for interference checking in its spectrum monitor mode.

The simple and intuitive UI allows engineers to generate and complete the test report on-site, also allowing them to Geotag each test point and place a snapshot of Google Maps directly into the report. 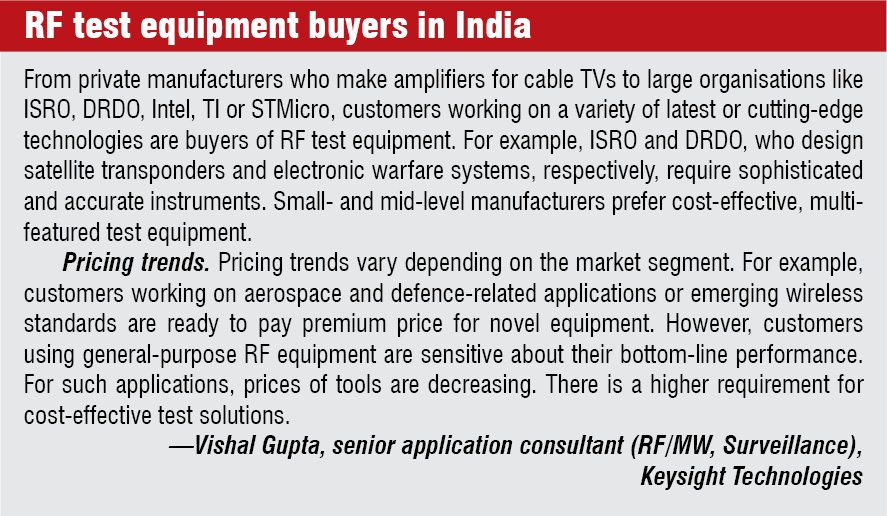 Analysing signals in RF designs in a budget-friendly manner
Engineers typically measure the performance of RF and microwave devices by considering S parameters, or, in other words, network scattering parameters. A vector network analyser (VNA) is usually employed to ensure that the RF design of the circuit is developed to present the best performance. It would be safe to assume that VNAs are crucial for RF design engineers, but there is a new, budget-friendly device in the market that looks to replace VNAs for most common applications.

Engineers do not make use of the entire spectrum of a VNA for common signal verification applications including cable testing, which are usually expensive. In such cases, relevant test can be performed on HyperLabs’ signal path analysers (SPAs). This instrument measures the vital parameters influencing the course of a signal through PCB trace, high-speed interconnect or cables.

S parameters, namely, return loss (S11) and insertion loss (S21) measurement capabilities, are incorporated in the recently-launched versions, eliminating the need for a separate network analyser, which is not to be seen in the low-cost competing instruments.

Limited to 20 channels, this tool can acquire and analyse cross-talk, time-domain transmissometry (TDT) and time-domain reflectometry (TDR) data in systems. Using the software, an engineer can also obtain voltage, impedance and other normalised readings in time-domain and frequency-domain. See Fig. 7 to see a comparison in the performance of a VNA and an SPA.

Common Public Radio Interface (CPRI) and Open Base Station Architecture Initiative (OBSAI) protocols are extensively used in such environments. It has become even more important for technicians and engineers to identify and resolve signal interference issues swiftly not only from conventional mobile sites, but even modern sites that employ fibre links between the baseband station and remote radio units. 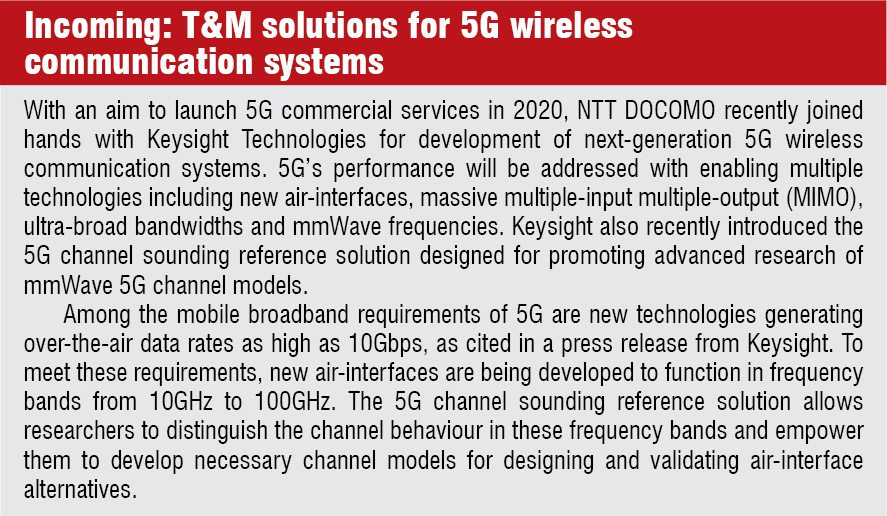 Vendors creating engineer-friendly tools
We have been seeing greater use of smartphones in testing for some time, but the roles these play have been increasing steadily. Once this blends in with cloud services and analytics, we might see the sort of disruption here that we saw the Internet of Things (IoT) do to the consumer world.

While some consider the IoT to be like a tech revolution, others like to think of it as old wine in a new bottle; some even say the wine blend has gotten better and cost-effective over the years.

Whatever floats your boat, the IoT sure seems to be catching up in almost every segment including test and measurement (T&M). Many T&M vendors are making the current generation of tools for testing engineer-friendly RF designs by integrating mobility, connectivity and features depending on the current set of market requirements.