Over the last few years, we have seen a revolution in the field of entertainment devices. The list that began with traditional radio and TV sets has exploded into an endless number of devices ranging from smartphones, digital cameras and camcorders, portable media players, mobile Internet devices (MIDs), netbooks, all the way up to large flat-panel displays, home theatre systems and much more. 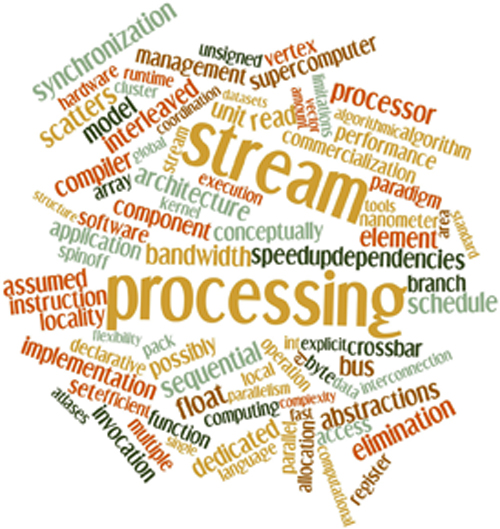 Now, for most entertainment devices, processing audio and video is one of the most important functions, and selecting an optimal processing solution is one of the keys to success for any product that has to do any significant amount of computing. The desired product features influence the product cost, power consumption and performance as well.

Aspects to be considered
Audio processors take comparatively lower processing power than video processors, but they are both equally important. Let us take a look.

Audio processors. Audio processors serve a variety of fields, and each of these fields has its own challenges and design goals. In some fields, digital signal processing is used to produce high-fidelity sounds such as in the entertainment industry where audio quality is paramount. On the other hand, communication systems require the audio to be clear while keeping within a low data rate. While designing any audio processing system, the designers have three primary targets to achieve: good audibility, intelligibility and fidelity.

Audibility. The audibility of speech or music must be sufficient to achieve the desired effect attained without distortion or feedback.

Intelligibility. Intelligibility is determined by the signal-to-noise ratio and direct-to-reverberant ratio at the listener’s end. Whilst the system must suppress external as well as electrical noise produced within the system itself, controlling the reverberation of acoustics produces good intelligibility.

Fidelity. Fidelity of sound is the overall frequency response of the sound, and a wide and relatively uniform frequency range contributes to realistic and précise augmentation of sound. Fidelity is basically contributed by every component, and any limitation at any point can affect the fidelity of the entire system.

On the other hand, vehicle-reversing cameras and other small-screen LCD applications for both automotive and non-automotive electronics require good image clarity. These applications also pose challenges such as safety and reduced power consumption, especially in automotive systems in order to minimise the power burden on the battery. This increasing range of applications poses a challenge for any designer who is required to choose from so many processors and their complexities.

Let us take a look at what the audio/video processing industry has in offering for embedded multimedia designs and development of feature-rich products.

Digital and analogue solutions
Analogue processors are used where we require the best quality output. T. Anand, co-founder, Knewron explains, ”The thumb rule is, where the quality of audio/video is of prime importance, we go for the analogue processing. The output from an analogue IC is much better than a digitally processed analogue output.”

The latest analogue I²C-controlled audio processors offer a wide range of features that are suitable for stereo and multichannel applications. These can save costs and enhance the audio signal chain of the designs. Also, these devices with integrated features such as digital volume and balance control, surround sound and tone controls, further enhance the designs. 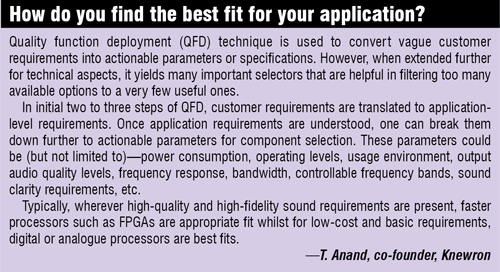 These surround or other multichannel formats are appropriate for producing virtualised 3D sound for two-speaker systems. Also, there are 3D audio processors which can create five-speaker surround sound from a two-channel stereo source.

Although digital processing can be lossy, the advent of efficient and powerful digital processors is an alternative to noise-prone analogue processing. Praveen Ganapathy, director, Business Development, Texas Instruments, India says, “Anything in the real world is analogue, so traditionally we could do processing in analogue domain; the only challenge is analogue domain is prone to a lot of noise. So we take the inputs in analogue form and then convert them into digital, process in the digital domain and then again convert to analogue form for the output.”