Telematics
Telematics is nothing but integrated use of information and communications technologies in vehicles.

The primary applications for in-car and car-to-car communications are location-based services and assisted driving. A combination of technologies such as the global positioning system (GPS), IEEE 802.11p based wireless access for vehicular environment (WAVE) and mobile mesh networking is used to achieve these goals.

Of late, car-to-infrastructure networks such as vehicle-to-toll gates and car-to-traffic lights are also gaining ground. Hence there is a great need for telematics chips that are automotive-qualified and can cater to various functions like GPS, GSM, CAN, NFC, USB and security.

Location-based services include on-demand dynamic navigation and notifications in case of accidents, emergency or stolen car situations. Such systems are based on GPS technology. Assisted driving services include avoidance of accidents, detection of lane violations, traffic signal detection and improvement of traffic flow. In the future, this is expected to extend to driverless driving and unmanned vehicle applications where the destination and the GPS-based roadmap will allow automatic navigation of the car without requiring a driver.

“The primary approach for car-to-car communications is to use dedicated short-range radio communication to allow cars to signal one another and receive messages from traffic equipment in concert with the GPS system as appropriate. Scanners and radio receivers are also key components for such applications. The technology preferred for car-to-car communications is IEEE 802.11p—a version of the popular IEEE 802.11 standard. IEEE 1609 (previously IEEE P1556) is the standard for higher-level protocol layers since IEEE 802.xx standards are defined only for layers 1 and 2. These include core system, security and privacy, networking services and channel management. This is commonly called WAVE, and operates in the 5.9GHz dedicated short-range communications (DSRC) band. There also have been recent proposals for use of the standard 3G/4G technologies instead of the 802.11p based approach,” explains Dr Suresh Borkar, a communications technology expert and faculty member at the Illinois Institute of Technology.

Dr Borkar adds, “Another recent approach being considered for in-car Internet access or for car-to-car communications is mobile mesh networking. Each car or node reconfigures itself automatically and acts like a relay mobile station. A mobile base station is a wireless relay (transceiver) that can send, receive and forward packets of information. The underlying technology along with the fixed base stations can be the standard 3G/4G or WiMAX technologies.”

Infotainment
Widespread adoption of communications technologies in vehicles has led to the growth of information and entertainment applications such as driver assist systems, e-commerce (online shopping, e-toll and insurance), location-based services, fleet management applications, personalised media delivery and so on.

Vehicle manufacturers are exploring a variety of technologies including advanced displays, touch screens, speech recognition, personal speaker control, noise cancellation, on-board storage, connectivity with other consumer electronic devices and hands-free control. There is also a lot of effort pumped into integrating all the multimedia options in a car onto a common platform, making it easy to upgrade the operating system, drivers, compilers and applications, enhance cost-efficiency and scalability, and ensure greater security and privacy.

Processors commonly used in automotive infotainment are from Freescale, Renesas, Texas Instruments, NXP, Intel and ARM. Operating systems used are QNX, Vx Works, pSOS, Embedded Linux, Windows CE, Windows Auto and MS Auto. Automotive infotainment being a vibrant and upcoming space, the industry has come together to bring about a bit of standardisation. Open Source development platform GENIVI, AUTOSAR Open architecture and MOST protocol are results of such efforts that are widely used. Similarly, diagnostic protocols such as the UDF and KWP 2000 are also becoming popular. 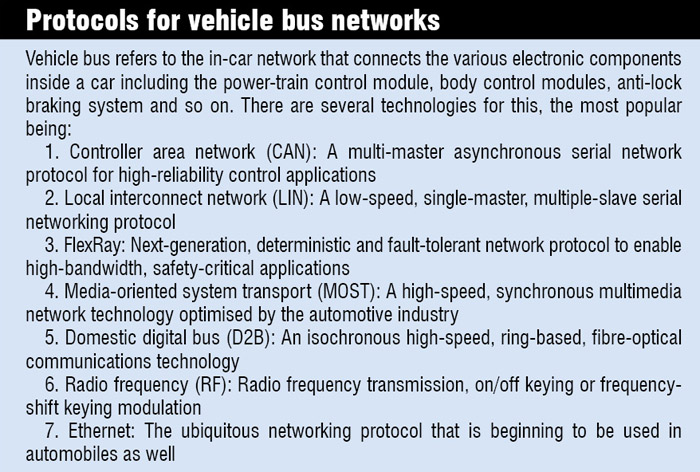 “Internet applications are set to make a major impact on car drivers and passengers during the next decade as we will undoubtedly witness new and innovative car-centric Internet applications and services. However, there will also be usage restrictions due to driver distraction issues while driving a car. Better interfaces with minimal driver distraction for Internet-based content will emerge in the next few years—some to be enabled by new infotainment systems and architectures. There is also a tremendous impetus coming from the mobile device world, with an explosion of applications related to mobility. Some of these applications will also find their way into cars,” says Ganesh.

Power-train management
Power-train of an automobile is concerned with generation, transmission and emission of energy, and includes the engine and transmission, wheels, suspension, drive shaft and exhaust system. It is typically managed using a power-train control module (PCM), which includes engine control and transmission control units. If engine is the heart of a car, PCM is the brain. PCM is perhaps one of the oldest applications of electronics in automobiles—although in its early years it was simply called an engine control unit.