You could make a GPS product, but there are too many. You could make a game console, but again there are too many. So how do you pick a popular segment, and yet make a product that wins? By being different! For example, adding an anti-theft component to a GPS product, a touch-free scanner to an access control system, or a charger that draws power from a cooking pot might kindle buyers’ curiosity. Let us look at a couple of such products that bring an interesting twist to their respective segment -- EFY Bureau

Capturing images in the wild—with no power
Suppose you are camping or trekking and your camera runs out of power just when you are witnessing a breath-taking sunset that you want to capture? Indeed, there are several devices today that provide portable power—there are solar chargers, kinetic chargers and other such innovative options cropping up, but Superheadz’s Sun & Cloud offers a much better solution. Japanese company Superheadz has come up with a hand-cranked digital camera that works on self-generated power. 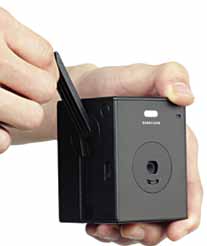 Inside: Sun & Cloud is capable of shooting both videos and stills, and has most of the features of a normal digital camera. What makes it unique is that it does not rely on batteries or grid power, and can be charged using kinetic energy from a hand crank. It is also equipped with a solar panel for sunny days, and is capable of USB charging when available. Sun & Cloud comes with 15 built-in filters,a three megapixel lens and three shooting modes (normal, portrait and macro). It has a high-power LED light for night shots, a built-in microphone for audio recording, and support for micro SD and micro SDHC cards. Just because it has a hand crank, do not assume that is will be huge and heavy—it measures 15.2×15.2×20.3 cm3 and weighs just 200 gm.

A tool to help golfers practice
Motion-sensor-based sports training aids are becoming popular today, and there are such tools for golf practice too. However, golfers grudge that these tools help only in the full swing and are not effective with smaller strokes. Putting, however, is very important and experts often call it a game within the game. It accounts for over 40 per cent of a golfer’s strokes. So it is important that a player is good at putting too. Here is a golf motion analyser that is small and light enough to fitinto the corner of the putter’s grip. With extremely capable sensors and a smart app, 3BaysGSA PUTT can analyse key aspects of putting strokes very well indeed. 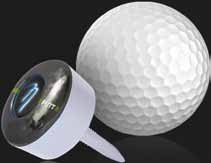 Inside: 3BaysGSA PUTT is a tiny device made of light plastic-like material. It uses a motion-sensing engine with 9-axis sensors that can detect, capture and digitise even the subtlest of movements. The device is to be fittedon the putter, and paired to your mobile phone using a Bluetooth. Thereafter, the sensor information is transferred to your mobile phone and analysed using an intelligent algorithm. Clear graphic representations of the stroke path, along with several key statistics are displayed on your device, and stored for later analysis as well. The small device is chargeable, and works for around three to four hours on each charge.

Preventing new-borns’ brain damage, the low-cost way
Sometimes, conditions like umbilical cord entanglement and anaemia can deprive babies of oxygen just before birth, causing brain damage and cerebral palsy. The best way to prevent this is ‘therapeutic hypothermia’ or cooling of the baby for an extended period of time, under safe conditions. Well-equipped hospitals have incubator-like cooling devices, which maintain a specific temperature till the baby recovers, bt these cost around $12,000 and are not affordable by all.

Recently, students at John Hopkins University, Maryland, USA, have developed a low-cost device called Cooling Cure, for reducing the temperature of babies at a cost of just $40. 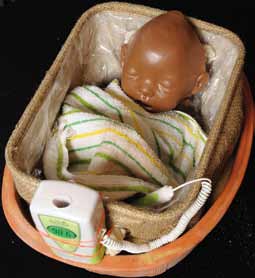 Inside: The Cooling Cure system can reduce a new-born’s temperature by about six degrees for three consecutive days. The cooler is made of a clay pot and a plastic-lined basket, separated by a layer of sand and urea-based powder, similar to the cooling powder used commonly in instant cold-packs. When water is added to the sand and powder mixture, the resulting chemical reaction draws heat away from the upper basket, which cradles the child. A battery-powered microprocessor and sensors track the child’s internal and skin temperatures. A green light indicates proper temperature, red warns of too high temperature and blue indicates too low temperature. The care-giver can accordingly add water to the sand to increase cooling, or lift the child away for a while if the temperature is too low.

Charge your devices using a cooking pot
When you are camping in the middle of nowhere, and want to charge your phone, you could draw out the PowerPot and start cooking a stew. Voila, your devices will get charged. PowerPot is a cooking utensil that can convert changing temperatures (of any water-based food inside it) into electricity. It can be used for wildlife tours, medical camps or rescue missions—any place where you would be cooking but do not have electricity. The basic model costs $149 but you could upgrade it with adaptors, lights, batteries, water purifiers,light-weight stove and other accessories.