Re-use of copper lines seems to be best suited since millions of connections for telephone networks are already in place. This implementation requires equipment to be added to the telephone exchange along with a small installation at the user’s premises. The digital subscriber line (DSL) is a transmission technology that utilises this available bandwidth to provide high-speed access to the Internet.

DSL family is collectively termed as xDSL and includes several different technologies like IDSL, HDSL, SHDSL, ADSL, RADSL, UDSL, Etherloop, VDSL and GDSL. These technologies vary from each other in terms of speed of transmission, symmetric and asymmetric bandwidth allocation, variation in speed between upstream and downstream, and maximum distance of signal transmission.

Integrated DSL (IDSL) is an ISDN based technology, which provides data-flow rates of 144kbps up to a distance of 5.4 kilometres. High bit-rate DSL (HDSL) is a symmetric technology that offers speeds of 2.048Mbps over two copper pairs up to 4.6 kilometres.

Single-pair high-speed DSL (SHDSL) is also a symmetrical technology that covers about three kilometres. With one pair of copper line, the SHDSL having a multiple of 64kbps payload provides symmetrical download and upload data rates ranging from 192kbps to 2.304Mbps. 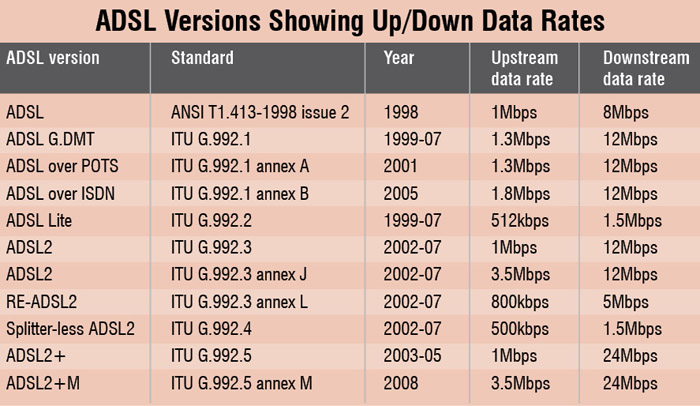