Broadband over power lines (BPL) technology is a union of two applications in a single system. It uses the existing power grid hierarchy comprising a network of different transmission lines to carry high-speed digital data over a broad range of frequencies without causing any unreasonable significant interference. Thus, BPL holds great promise as a ubiquitous broadband solution that would offer a viable alternative to existing broadband technologies -- Dr Rajiv Kumar Singh

Despite the proliferation of broadband Internet technology in the last few years, many regions of the world, particularly rural and low-income areas, still do not have access to broadband services. Huge costs involved are the main obstacle to creating new infrastructure in such areas for existing broadband wired or wireless technologies like digital subscriber line (DSL), cable and satellite. But if broadband could be served through electric power lines, there would be no need to build a new infrastructure for last-mile access. So wherever electricity is available, there could be broadband.

In this perspective, broadband over power lines (BPL) technology seems to emerge as a new business prospective for established telecom operators, utility companies and system manufacturers to provide high-speed broadband services that can cover each and every home or office due to almost omnipresence of power lines. With no need for new wiring or major infrastructure deployment, BPL creates an alternative broadband solution that could lead to lower prices for broadband consumers. Thus it is hoped that BPL has the potential to become an effective means for last-mile delivery of broadband services and may offer a competitive alternative to other high-speed Internet access technologies. 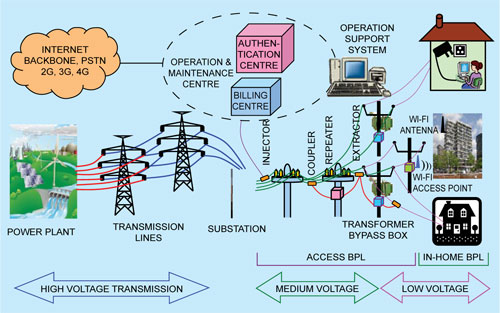 BPL systems use the existing electrical power lines as a transmission medium to provide high-speed telecommunications capabilities by coupling radio frequency (RF) energy onto the power line. In order to carry high-speed data, BPL uses radio spectrum ranging from high-frequency (3-30 MHz) to lower portion of very high-frequency (30-300 MHz) allocated to other over-the-air communication services. Because the electric current (50 Hz) and RF (typically 2-80 MHz for BPL) have different frequencies, the two don’t interfere with each other.

There are two predominant types of BPL communication configurations: Access BPL systems that couple RF energy onto medium-voltage (MV) and low-voltage (LV) power lines; and in-home BPL networks, which use existing electrical outlets available within a home or office for the provision of a local-area network (LAN). A typical BPL network set-up is shown in Fig. 1.

The existing three-tiered power grid hierarchy, which comprises HV, MV and LV transmission lines, is exploited to carry the high-speed digital data over a broad range of frequencies without causing any significant interference to the rightful incumbent users of those frequency bands. The electricity is generated from power plants (thermal, hydro, nuclear, wind turbines or solar), which is synchronised three-phase, offset by 120-degree, AC power of the order of thousand volts at the line rate of 50 cycles per second. Three phases are chosen to get nearly peak value at any given instant, which results in a good compromise between cost and performance. More phases could be used but this implies more cost with only a slight improvement in performance.

The AC power generated is now ready for its journey to the customers. As mentioned earlier, a three-tiered hierarchy is used to transmit this AC power to distant end-users. Power transferred over lines is given by the product of voltage and carrying current.

For a given line resistance, which depends on the line material and line length, the power loss is given by the product of line resistance and square of the carrying current. So in order to reduce power loss in the lines and transfer maximum generated power to long-distant end-users, current must be made as small as possible and voltage as large as possible. That’s why transmission substations located next to power plants use large transformers to step up generator output voltage, thus allowing megawatts of power transmission over distances of 400 km or more.

At power substations, voltages are stepped down and lines branched out to cover larger areas. This is performed successively, transforming and branching out from extremely high voltage (typically 345 to 785 kV) to HV (typically 115 to 230 kV), and then from HV to MV (typically 2.4 to 69 kV), and finally from MV to LV (typically 120V to 600V) for delivery to homes or offices.

HV lines transmit power over distances that are tens of kilometres, but are very noisy and not used to carry broadband signals. Such a high voltage contains infinite number of harmonic components, and if it spikes at the frequency of the RF used to transmit data, it will cancel out that signal and the data transmission will be dropped or damaged en-route.