Mobile phones have been found to cause changes in the brain activity, reaction times and sleep patterns. The length of cellphone call affects the intensity of these symptoms. As it’s not possible for us to stop using mobile phones altogether, precautionary measures are needed to avoid their ill effects -- Rajiv Kumar Singh

Mobile phones use electromagnetic radiation in the microwave range, which may be harmful to human health. They communicate by transmitting radio waves through a network of fixed antennae called base stations.

Radio-frequency waves are electromagnetic fields, and unlike ionising radiation such as X-rays or gamma rays, cannot break chemical bonds nor cause ionisation in the human body. All radiations and fields of the electromagnetic spectrum that do not normally have sufficient energy to produce ionisation in matter are termed as non-ionising radiation. These are characterised by energy per photon of less than about 12 electron volts (eV), wavelengths greater than 100 nanometres (nm) and frequencies lower than 3×1015 Hz. 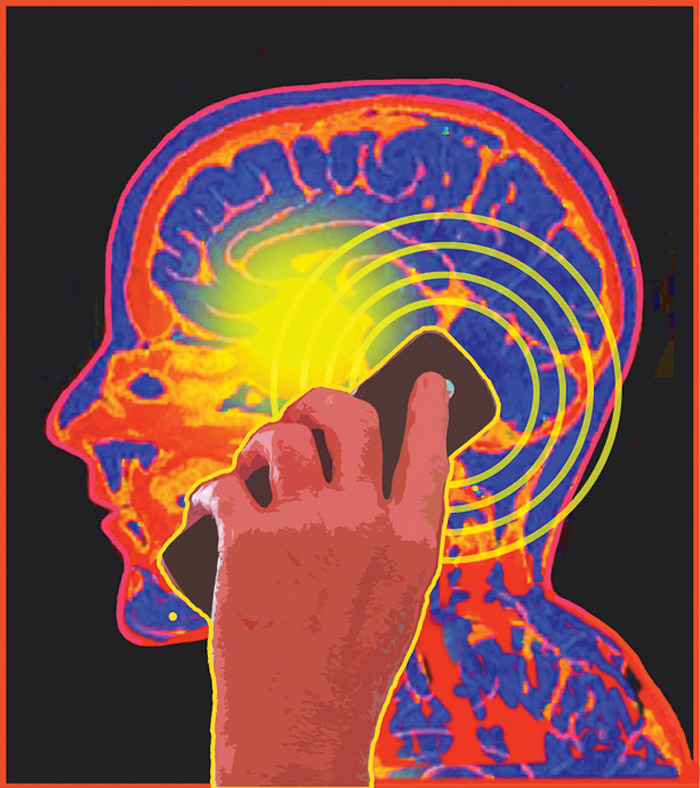 In response to public and governmental concern, the World Health Organisation (WHO) started the International Electromagnetic Fields (EMF) Project in 1996 to assess the scientific evidence of possible adverse health effects of electromagnetic fields. Given the immense number of people who use mobile phones, even a small increase in the incidence of adverse effects on health could have major public health implications. Because exposure to the RF fields emitted by mobile phones is generally more than a thousand times than from base stations, there is a greater likelihood of any adverse effect of handsets.

Health hazards
A large number of studies have been performed over the last two decades to assess whether mobile phones pose a potential health risk. An assessment was published in 2007 by the European Commission Scientific Committee on Emerging and Newly Identified Health Risks (SCENIHR). The research clearly showed an increased risk of traffic accidents when mobile phones (either handheld or with a hands-free kit) are used while driving.

Electromagnetic interference is also a major concern. When mobile phones are used close to some medical devices (including pacemakers, implantable defibrillators and certain hearing aids), there is the possibility of interference with their operation.

Other health effects of using mobile phones include changes in the brain activity, reaction times and sleep patterns.

SAR is defined as the time derivative of the incremental energy absorbed by or dissipated in an incremental mass contained in a volume element of a given density. SAR values are heavily dependent on the size of the averaging volume.

Measurement of SAR value is a complicated process and comprises a phantom human head, specially developed liquids, a robot fitted with a measurement probe and a mobile phone powered up to its maximum certified power level.

Thermal effects. Tissue heating is the principal mechanism of interaction between radio-frequency energy and the human body. Tissue is a dielectric material which is heated by rotations of polar molecules induced by the microwave radiation.

At the frequencies used by mobile phones, most of the energy is absorbed by the skin and other superficial tissues, resulting in negligible temperature rise in the brain or any other organs of the body. In the case of a person using a cellphone, most of the heating effect occurs at the surface of the head, causing its temperature to increase by a fraction of a degree. The local blood flow mechanism of the brain is capable of disposing of excess heat. However, the cornea of eye does not have temperature regulation mechanism and is more prone to produce cataracts.

Long-duration cellphone usage also causes burning effects to the ear and ear-aches, or sharp pains inside the ear to the same side of the head as the phone is held. Some users even experience pain descending down from just behind the ear onto the jaw. Some users feel numbing sensations or tingling mainly in the outer area of ear, face or jaw.

Eye problems may include fluttering of the eyelids, blurring of vision and bloodshot eye—always in the eye nearest the cellphone. Several studies have indicated that low-level RF exposure due to cellphones could cause significant visual effects, including the destruction of corneal endothelial cells, increased vascular permeability and destruction of photoreceptors in the retina.

Non-thermal effects. Some biophysicists argue that there are several thermoreceptor molecules in cells, which activate a cascade of second and third messenger systems, gene expression mechanisms and production of heat-shock proteins in order to defend the cells against metabolic cell stress caused by heat. The increases in temperature that cause these changes are too small to be detected.

Cognitive effects. The impact of cellphone radiation on cognitive functions of humans has been studied by several researchers. These studies confirmed slower response to a spatial working memory task when exposed to cellphone radiation.