As far as technology is concerned, the future is always far away. Designers never live in the present moment. If they did, we would not be having smartphones in our hands. And now that we do, they are busy designing something else—phones that can be folded, phones that can be worn and so on.

We look at some such mind-blowing concept phones. Some are new while others were developed years ago, but continue to fascinate developers and user communities even now.

Although you will want to pre-order many of these fantastic phones as soon as you read about these, you might have to wait because many are still no more than concepts, while others are going through the rigours of development.

Phones of the future are expected to be as capable as desktop computers, and might even be used for critical business transactions. So a greater level of security would be needed.

Some years ago, Dell developed a software based technology that overlays a distorted pixel based pattern across the screen. This on-demand security feature n 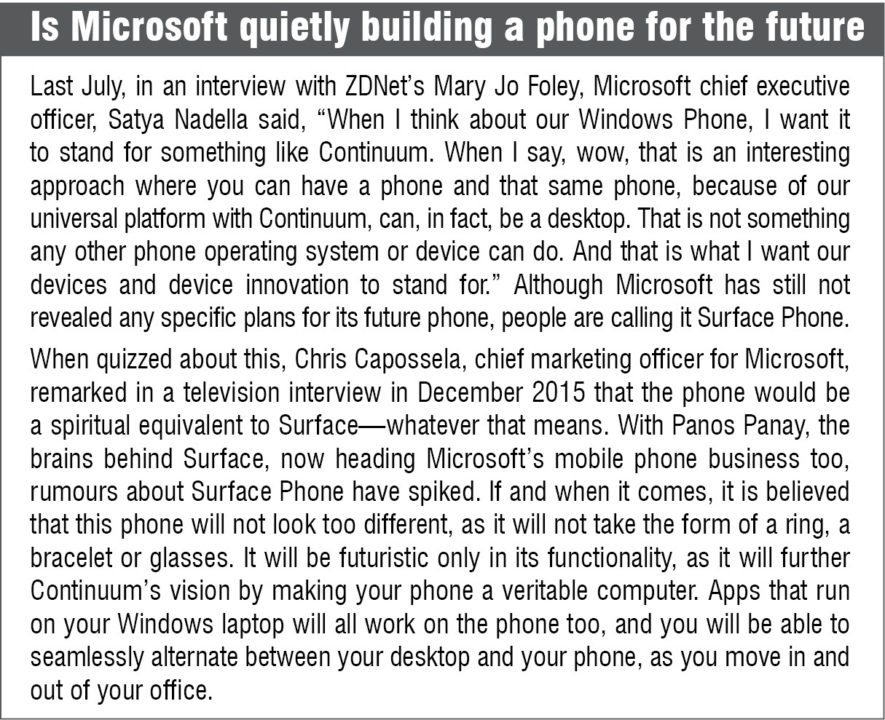 arrows the viewing angle, so that only the user can view the contents of the screen. Those viewing from behind or from the sides cannot. Already available on some Dell laptop models, this would be a nice feature to have on future phones, too.

A few months ago, NTT DoCoMo and Fujitsu unveiled a phone that can identify the user through iris recognition. This could be used to unlock the phone as well as to certify mobile payments without having to enter passwords in public.

With the growing popularity of organic light-emitting diodes (OLEDs), a technology that enables displays to be made of flexible, organic materials, the advent of graphene that promises a lot of disruptions in everything from displays 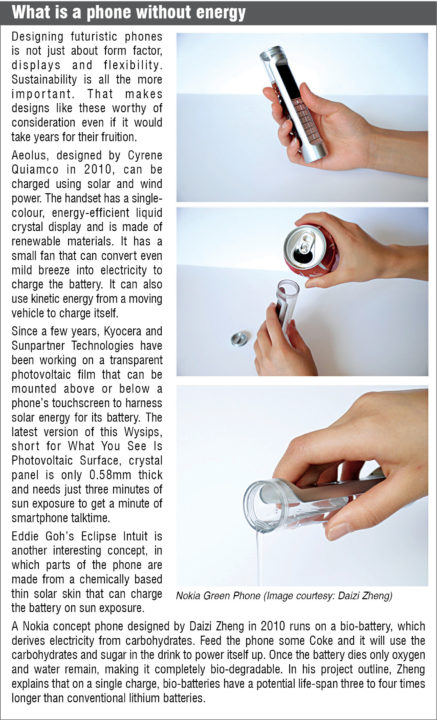 to hardware, and continuous improvements in flexible electronics, we can expect to see phones that can be rolled up like paper or folded up like hankies.

The quest for flexible phones has been on for quite some time now. A few years ago, NEC Design came up with an interesting Tag Soft-Shell mobile phone, made of a rubbery, shape-memorising material, which enabled the phone to flex at the user’s command.

Nokia 888 is another concept that combines a flexible touchscreen with liquid battery to ensure flexibility. A touch-sensitive body cover enables the phone to understand the environment and adjust to it.

Fluid Smartphone, designed by Brazilian designer Dinard da Mata for Philips, works like a slap-wrap bracelet that wraps around the wrist.

Samsung has unveiled several ideas using its YOUM flexible OLED displays. So far, LG too has shown off many wonderful flexible concepts like Flutter and Helix bracelet.

Apple, too, has filed patents for flexible devices. So we expect a lot of fun to unfurl in the coming years.