Counterfeit Components and Their Impact

Counterfeiting ranges from exact copies of whole products to replicas of electronic components. With the increasing need for components, counterfeiters are becoming sophisticated and are using advanced techniques to counterfeit. Fig. 1 shows what all are getting affected by counterfeiting. 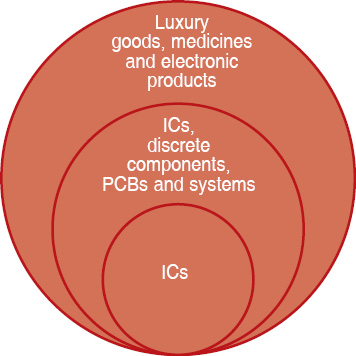 Types of counterfeits
Counterfeits are classified by the way these are fabricated and fall into the following categories:

Recycled. Devices that are pulled out of discarded printed circuit boards (PCBs), which are sent for recycling, are modified in such a way that these look like new ICs, which are then sent out for sale.

Over-produced. With increased proliferation of fabless semiconductor vendors (IC manufacturers who do not own a foundry and use a third-party foundry for manufacturing the ICs, and are very similar to electronics manufacturing service (EMS) vendors), foundries that manufacture ICs produce more than the required quantity and sell these in the market. This typically happens with unreliable foundries. Fig. 2 shows the leakage points where devices can leak out of the system and get into the market.

Rejected or defective. Counterfeits that fall into this category are devices that are rejected in one of the test stages in the manufacture of an IC, as shown in Fig. 3.

A typical semiconductor has three stages of testing: first, at wafer level, second, when the device is packaged and third, during final testing. Any device that fails any one of the three test stages is rejected and sent for destruction. The failure could be from downright dead devices to devices that fall outside test specifications. Counterfeiters pick up these rejected items and sell these back to the market as good parts.

Cloned. With increased use of third-party-developed IP cores (codes/circuits that are tested and available in a reusable format), cloning has become quite easy. Typically, cores are licensed for a fee and chip designers integrate these into their designs. Counterfeit manufacturers use the IP core in their devices without paying the licence fee to the developer and get the ICs manufactured.
In addition, when complexity of ICs is low, some counterfeiters just reverse-engineer the whole IC and clone it or copy it. Detection of clones is a challenge as in most cases these function like the originals.

Forged documentation. Another type of counterfeits tamper the documentation that is sent along with the ICs when shipped from factories. By forging documentation, devices can be up-marked (represented as a higher specification part) and sold at a higher price. A good example is to mark a commercial-grade part as industrial-grade.