Gesture Recognition Beckons The Next Wave Of UI

User interface (UI) design problem: Too many steps to do something. Engineers have been enabling advances here by moving from physical keys, switches and knobs to resistive touchscreens and later to capacitive screens that accept multi-touch inputs, swipes and other gestures. Also seen are various wearable controllers and vision based systems that let you control electronics without laying a finger on a physical device.

It is now six years since Microsoft disrupted gaming with optical sensors in its Kinect, and gesture technology looks ready to take a leap in 2016.

Swiping your way through screens
It all starts with recognising touch, swipes and gestures. GestureTek is a company that has been into 3D video gesture control since the early 2000s. They have been keeping up with display technology, too, and now offer 4K displays with multi-touch enabled on these. Their multi-touch tables offer up to 32 touch points on 213cm displays.

They also have GestTrack3D, a patented 3D gesture-control system for developers, original equipment manufacturers and public-display providers. Their software development kit comes with a set of one-handed and two-handed gestures in the library.

Of course, sometimes you do not have the budget to swap out existing displays for newer ones. In such cases, DISPLAX Skin Multitouch is a patent-pending technology that lets users turn non-conductive flat surfaces into multi-touch surfaces that are liquid and ultraviolet rays resistant.

DISPLAX features a proprietary noise-cancelling technology called XTR-Shield that helps reduce the gap between the sensor and the display, which also helps remove parallax. It uses a projected capacitive technology and can handle up to 20 simultaneous touches with a relative accuracy of one millimetre.

PQ Labs G4 overlay is another component with a similar use case that can be fixed in front of a television or monitor to change it into a multi-touch display.

The latest in the line up is probably French Bixi, a portable gesture device. It is a combination of Gorilla Glass and Bluetooth Low Energy (BLE) with optical sensing that can detect eight gestures.

Wearables and gesture recognition
Seen as the easiest way to break the stranglehold of keyboards and mice, gesture control through gloves is a promising area. Apotact Labs recently brought out a glove called Gest, which uses skeletal models and motion-processed data to sense gestures.

Essentially a glove-like controller, it comes with a software development kit (SDK) that allows engineers to build new applications for the platform. The glove packs 15 sensors including accelerometers, gyroscopes, magnetometers and more. The vendor claims that their software is smart enough to learn how you use your hands and uses that to create a personalised model.

Alternatively, as a more portable solution, Thalmic Labs brought out Myoarmband, which measures electrical activity in the forearm muscle to make sense of gestures. It lets you control drones or integrate these with Oculus Rift. However, the unique factor here is also its weakness, as there are many reports that the product is not ready for primetime yet.

Aria Wearable is more of a watch-like device from Deus Ex Technology, which will let you interact with electronics through simple finger gestures.

Funded by Menlo Ventures and Sequoia Capital, Nod probably uses the smallest form factor for a wearable gesture controller. It is a BLE-enabled gesture-control ring. It comes with highly-sensitive sensors built into the hardware that allows developers and engineers to make use of up to 12,600-dots-per-centimetre (32,000dpi) sensitivity. 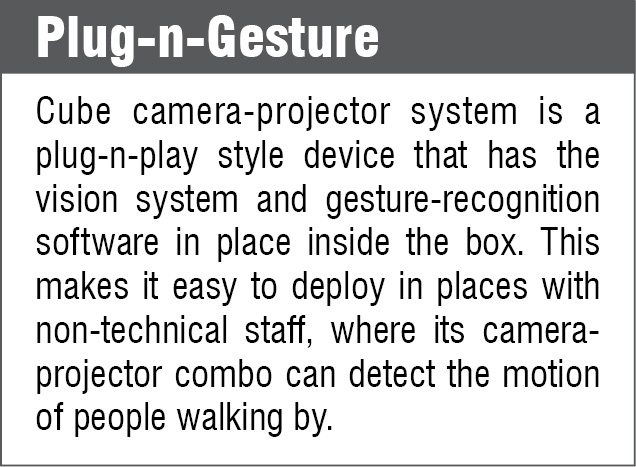 Gesture-control rings have been in the works for a long time, including ones that did not really take off. Now we have Ring Zero from the firm Logbar. It is a product that was first seen at Kickstarter but is now available to all. Developers can access Ring SDK for iOS, but the one for Android is still a work-in-progress. The drawback here is that it requires the user to wear the sensing instrument.