The rapid development of telecommunication technologies has resulted in an increase in the human exposure to electromagnetic fields and led to a number of scientific studies exploring its possible health hazards. This article highlights how a mobile phone creates radiation fields around the human head resulting in harmful health effects -- Dr Rajiv Kumar Singh

Unlike X-rays and gamma rays, radiation from microwave telecommunication systems falls under non-ionising type that cannot cause ionisation in the human body. All radiations and fields of the electromagnetic spectrum that do not normally have sufficient energy to produce ionisation in matter characterised by energy per photon as less than about 12 electron volts, wavelengths greater than 100 nanometres and frequencies lower than 3×1015 Hz are termed as non-ionising. 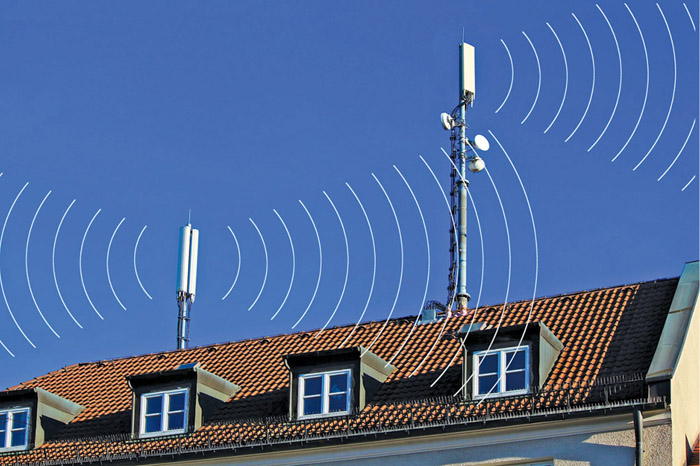 For broadcasting purpose, high RF power is generally required to maximise the area of coverage. Electric field strengths in the vicinity of antennae can reach several hundred volts per metre. Even higher values can be found close to occupational sources. In many such applications RF safety problems arise as RF power is high.

Sources used by the general public, e.g., for wireless communication or data transmission, generate comparably much lower fields near the position of the user. But this may also depend on the behaviour of the user, especially concerning the distance to the source.

Cellular mobile communication networks, on an average, cause low levels of electromagnetic fields in areas accessible to the general public. Handsets and cell phones, however, might cause significantly higher peak levels of exposure during use.

Mobile phones are low-powered radio-frequency transceivers, operating at frequencies between 450 and 2700 MHz. Typically, a GSM (global system for mobile communication) handset emits radio waves having peak power of 2 W, and CDMA2000 (code-division multiple access) handset emits below 1W peak power. The handset transmits power only when it is turned on.

In most systems, the cellphone and the base transceiver station check the reception quality and signal strength, and the power level is increased or decreased automatically, within a certain span, to accommodate different situations such as inside or outside buildings and vehicles. The power (and hence the radio-frequency exposure to a user) falls off rapidly with increase in the distance from the handset. A person using a mobile phone 30-40 cm away from his body—for example, when text messaging, accessing the Internet or using a hands-free device—will therefore have a much lower exposure to radio-frequency fields than someone holding the handset against his head.

Thus to achieve a quantitative understanding of the biological response, dosimetric quantities such as specific absorption rate (SAR), induced electric field and current density must be quantified and correlated with the observed phenomenon. It is noteworthy that dosimetric quantities and their determinations are tissue-type dependent, and require a region of specific tissue mass for averaging and for correlation with any induced biological response. Thus a smaller averaging region is scientifically more relevant and precise.

The rate at which radiation is absorbed by the human body is measured by SAR in watts per kilogram, and is defined as the time derivative of the incremental energy absorbed by (dissipated in) an incremental mass contained in a volume element of given density.

SAR values are heavily dependent on the size of the averaging volume. Without information about the averaging volume used, comparison between different measurements cannot be done. Thus the European 10gm ratings should be compared among themselves, and the American 1gm ratings should be compared only among themselves. SAR data for specific mobile phones, along with other useful information, can be found directly on the manufacturers’ websites/manuals. 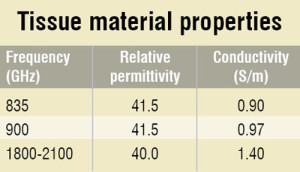 For electromagnetic simulations, 3D EM tool CST Microwave Studio (CST MWS), based on the finite integration technique, is used. The transient solver of CST MWS with its perfect boundary approximation and thin sheet techniques is widely known for delivering accurate and fast results for various types of antennae including electrically small antennae, such as those found in mobile phones.