Blockchain consortia are creating a massive hype in the market. Many enterprises are highly interested in this type of network and willing to join consortia to gain optimal benefits of blockchain technology. However, there are still lots of unknown facts regarding how a consortium works and how it is governed, etc. 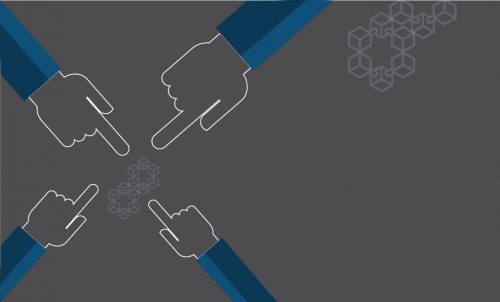 It is important to understand that there is no universal sort of blockchain governance. It all depends on the type of blockchain solution that companies can use. There are three main types of blockchain systems: open or public, private or permissioned, and consortium or federated blockchains. Public and private blockchains are all known to the general audience, but consortium blockchain needs more understanding.

Blockchain consortium, is defined as a type of network where multiple organisations maintain the system. A group of companies thereby collaborates on advancing the state of blockchain technology adoption in the industry, establishing industry standards, drafting use cases, developing key infrastructure, and operating commercial blockchain platforms.

Consortium blockchains are termed as ‘Hybrid Solutions,’ in-between public and private, that is, between fully open decentralised systems and fully centrally controlled, thus taking the best of both the worlds. Rather than one organisation, multiple organisations take part in the consortium and every organisation gets similar treatment. So, there is no single entity ruling over the network.

During a small Deloitte survey of 1,386 global enterprises in 2019 regarding blockchain consortium impact of industry in world, the following percentage was observed in varied parameters:

Blockchain is based on peer-to-peer topology that allows data to be stored globally on millions of servers. It is also described as a P2P, decentralised, distributed ledger technology that works involving any third-party intermediary or central authority, unlike traditional banks that rely on intermediaries. Blockchain offers more security, transparency, immutability, which is why it is the most discussed technology at present. The technology is attracting blockchain developers and blockchain experts due to its potential to revolutionise the way industries and businesses work.

Depending on the use and requirements, blockchains have been categorised into three types: public, private, and consortium (also known as federated). Each of these blockchain networks serves its purpose and solves problems, and each blockchain has its own set of features and advantages over one another.

Public blockchain is a permission-less, non-restrictive, distributed ledger system, which means anyone who is connected to the internet can join a blockchain network and become a part of it. The basic use of such a blockchain is in exchanging cryptocurrencies and mining. It maintains trust among the whole community of users as everyone in the network feels incentivised to work towards the improvement of the public network.

The first example of such a blockchain is Bitcoin that enabled everyone to perform transactions. Litcoin and Ethereum are also examples of a public blockchain.

Unlike the public, a private blockchain is a permission-needing and a restrictive blockchain that operates in a closed network. Such a blockchain is mostly used within an organisation where only particular members are participants of the blockchain network.

Consortium blockchain (also called federated blockchain) is best suited for organisations where there is a need for both types of blockchains, that is, public and private. In this type, there is more than one central in-charge, or we can say more than one organisation involved who provides access to pre-selected nodes for reading, writing, and auditing the blockchain. Since there is no single authority governing the control, it maintains a decentralised nature. Energy Web Foundation and IBM Food Trust are two examples of such a blockchain.

Table 1 highlights the differences between public, private, and consortium blockchains.

There are three types of blockchain consortium:

This type of blockchain consortia is technology focused. These offer reusable blockchain platforms and solution based on technical standards. These have multipurpose use cases and exist solely for the purpose of helping blockchain reach global recognition. Each one is suited to varied businesses and different types of solutions, and developers across the globe are working on its advanced development. Examples: Quorum, R3 Corda, Hyperledger.

This is intended to develop blockchain solutions for a specific business issue. Instead of offering open source platforms, many go for commercial purposes only. Most of these are focussed on industries like supply chain, health, trading, healthcare, etc. Examples: Bankchain, We.Trade, B3i, Marco Polo.

These focus on both technology and business when offering a platform or solution. These offer open source platforms that are suitable for the required solution and commercial products as well. Example: R3.

To grow in blockchain, it is significant to have ever learning support. So, consortia offer strong platforms for learning in terms of training and development support from experts.

As blockchain is a new technology, definitely tons of risks are associated with it in the marketplace. But with a consortium, the members collaborate with each other and overall risks get reduced, whether the final solutions fail or succeed.

Consortium plays a crucial role for mass adoption, which enables the companies to reach a new height without which the global reach sometimes is out of question.

Consortium offers a relevant solution or roadmap plan. As the technology keeps changing, staying in one field becomes challenging and cumbersome. With consortium, the plans change accordingly and make a business grow in quantum manner.

Consortia can influence new standards. According to the market, blockchain would soon reach interoperability. With strong influencing, the blockchain industry will become a trillion-dollar industry in the world.

Blockchain consortium is widely getting popular since last few years and is being widely preferred as a solution to replace legacy distributed workflow systems like simplified document management systems or semi-manual compliance systems.

Typically, in a blockchain consortium, we have various key entities as shown in Fig. 2 and explained below.

Founding Member forms the governance model and hierarchy of groups to be used in the blockchain platform.

Consortium Promoter forms the administrative activity in implementing the blockchain platform of choice from R3, Hyperledger, B3i, Bankchain, etc, depending on the industrial solution and use case being addressed.

Governance Principles define the principles to be used between public and private blockchain solutions that we want to implement in the architecture.

Governance Board and Policies form the central authority to handle architecture decisions based on the justification from the consortium promoters, participating members, and founding members.

Consortium Manager decides how the rules engine and the smart contract are to be used in the blockchain consortium to address the key transactional requirements.

Decision System helps to choose the responsibility to be handled by different governing bodies in the blockchain consortium units.

Ledger Handling Connectors help to connect to the shared ledger service or cross-platform services when using a combination of public and private blockchain platform.

Rules Engine defines the set of rules to be used for transaction handling and the business logic to be used for satisfying the blockchain execution workflow.

Smart Contract defines the proof-of-work or proof-of-stake consensus algorithm and how to handle the trust-less entities in the blockchain platform.

Overall, the blockchain consortium governance model is designed in such a way that it helps to define a hybrid blockchain platform that is semi-decentralised to handle the workflow under the supervision of consortium manager, which is a limited group. It works as permissioned ledger for a group of consortium promoters based on the decision system.

This makes the consortium to behave as a multi-party consensus platform where every transaction and operation is verified by a special group of pre-approved nodes and every node is not allowed to do this kind of special approval.