The satellite was successfully placed in sub-Geosynchronous Transfer Orbit. 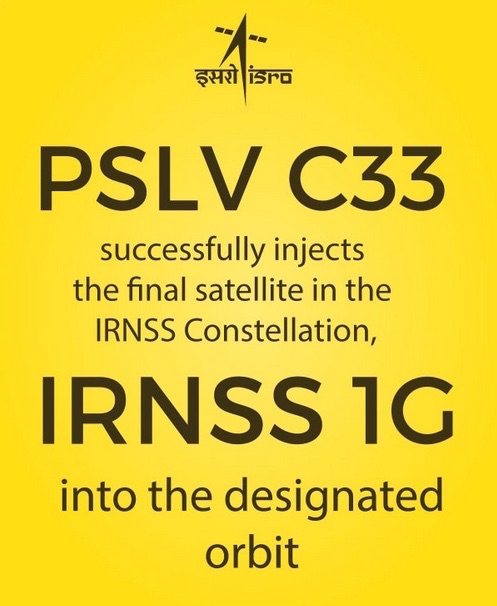 The integration of the rocket on the launch pad and the propellant filling operations were taken up at different stages during the 51.30-hour countdown that began at 9.20 a.m. on Tuesday.

IRNSS will be to the Indian subcontinent what the currently popular GPS is to its users worldwide. The benefit with the IRNSS is that it will offer greater precision and remain in Indian control, according to the Indian Space Research Organisation. It is expected to provide position accuracy of better than 20 m over Indian region and also an area extending up to 1,500 sq. km around India.

The well-known GPS is owned by the U.S. Air Force; Russia has GLONASS and China is expanding its regional BeiDou into a global system, also operated by its military. Europe’s GALILEO is a civil global system. They each have between 28 and 35 satellites.

IRNSS will drive both everyday uses as a 24/7 standard service for air, sea, ship transport among others. It will also be used for military and missile-related applications as an encrypted and restricted service.

Over the next three to six months, all the IRNSS satellites would be stabilised as a constellation, their signals and performance verified and later put to use, an ISRO official said.

Two spare satellites are kept ready to be flown in an emergency. A full-fledged ground control centre in Bengaluru and tracking stations across the country have been put in place.

The constellation has been in the making since July 2013, when IRNSS-1A, was launched. ISRO placed IRNSS-1E and IRNSS-1F in January and March this year, each with a designed life of 12 years. They are identical, with each carrying a navigation payload and a ranging payload in different bands, according to ISRO.