Janani Gopalakrishnan Vikram is a technically-qualified freelance writer, editor and hands-on mom based in Chennai -- Dr Srirang Manohar is the man who gave PAM a fillip

According to World Cancer Research Fund International, breast cancer is the most common type of cancer in women, and the second most common cancer overall. Doctors recommend that women frequently take tests to detect the onset of cancer early, when it can still be treated. Yet, current procedures for cancer detection put many women off, especially in rural areas.

A new method, proposed by a team from University of Twente, The Netherlands, in Nature Scientific Reports (refer www.nature.com/articles/srep11778#ref48) could offer a way out. The paper presents a photoacoustic method for imaging soft tissues, which has, in turn, been applied to develop a non-invasive, economical and effective method to detect breast cancer. 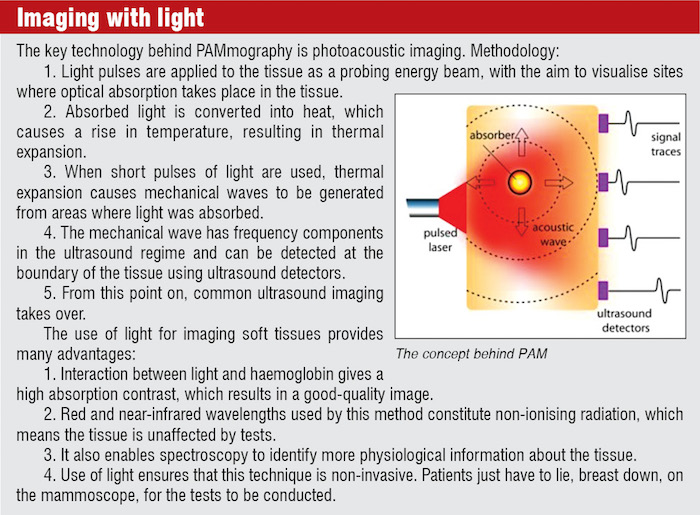 We caught up with Dr Srirang Manohar, associate professor at University of Twente’s Biomedical Photonic Imaging group to find out more about this new technology, which they call PAMmography.

Concept to device
In 2001, Dr Manohar, who did his PhD from Indian Institute of Science (IISc), Bengaluru, learnt of a vacancy at University of Twente, where some pioneering work was being conducted in photoacoustics, involving light interactions with biological tissues. In the new project, applicability of the method to breast imaging was to be investigated.

Dr Manohar’s involvement gave the project a fillip, and four years later they had a working prototype called Twente photoacoustic mammoscope (PAM). The device has consistently evolved since then, leading to the recent technical paper, which reports a successful study on 29 patients using an upgraded version of the device. (Read in detail about the device upgrades and trials at efytimes.com/e1/fullnews.asp?edid=171496&title=Cancer-Is-Painful-But-Its-Detection-Can-Now-Be-Painless)

While PAM by itself is designed specifically for breast cancer detection, the team has also developed other variants and implementations that can be used for detecting skin cancers and inflammation of finger joints in rheumatoid arthritis.

On to PAM 2.0
So far, the team has only applied the device to study breasts already known to have cancer. Now, the team is in the process of developing a second version of the device called PAM 2.0 with which they hope to do imaging with more than one wavelength and full-breast coverage. This will be used in the near future on imaging breasts without prior knowledge of cancer.

“While we have had a laser group in our university develop a laser for us, we use a commercially-available laser with two wavelengths for PAM 2.0. Regarding the ultrasound detectors, we have developed a specialised system for PAM 2.0 together with an ultrasound detector manufacturer. We have a detector system comprising 512 elements made of piezoelectric material CTS 3203-HD (CTS Communications Components Inc., Albuquerque, New Mexico). This is being tested at the moment,” says Dr Manohar.

As far as the electronics go, there are two stages at which they require specialised systems. On the analogue side, for processing signals from the ultrasound detector, they have developed preamplifiers to be mounted at close proximity to the detector elements. They have used 8-channel low-noise preamplifiers based on ADA4896-2 (Analog Devices, Norwood, MA, USA) as the analogue front-end.

The second stage where they require electronics is for data acquisition (DAQ). For this, they are currently using a system built by National Instruments, an NI PXIe-7966R FlexRIO field-programmable gate array (FPGA) module with which four digitiser modules (NI 5752) are coupled. Each digitiser contains 32 simultaneous 50MS/s, 12-bit channels.

The digitisers themselves have an analogue front-end each based on low-noise AFE 5801 chips (Texas Instruments Inc., Dallas, Texas, USA). They are also developing their own DAQ system with the help of PA Imaging BV, a company that they are financially involved with.

“We are also working closely with a company called Oldelft BV (Delft, The Netherlands) for the new ultrasound detectors in PAM 2.0,” adds Dr Manohar.

Is PAM better than conventional imaging
“I believe that given time and with further technical development, PAMmography has the potential to address the drawbacks of conventional imaging methods,” says Dr Manohar. He explains that x-ray mammography sometimes misses cancers, and often sees cancer when there is none. It does poorly especially in breasts with more glandular tissue (in younger breasts). It also uses ionising radiation and requires severe breast compression. Ultrasound imaging has poor contrast for breast cancer and misses smaller lesions. MRI is very expensive and therefore not very accessible. It also uses contrast agents.

He adds, “I think PAMmography can be cheaper than MRI, and perhaps at the same level as ultrasound imaging. Since it uses light, it does not ionise tissue and harm it. Further, there is much to be gained by using various colours of light—in a spectroscopic manner (which we have not yet implemented)—because this can give you more fundamental molecular knowledge of the tissue, which may help in making more accurate diagnoses.”