Abhishek Mutha of EFY got in touch with Jens Keiser, senior product marketing manager at Maxwell Technologies, to discuss ultracapacitors and their potential applications

A battery supplies energy to the car. But what about ultracapacitors? What can these do in terms of vehicle electrification and energy-efficiency? Abhishek Mutha of EFY got in touch with Jens Keiser, senior product marketing manager at Maxwell Technologies, to discuss ultracapacitors and their potential applications 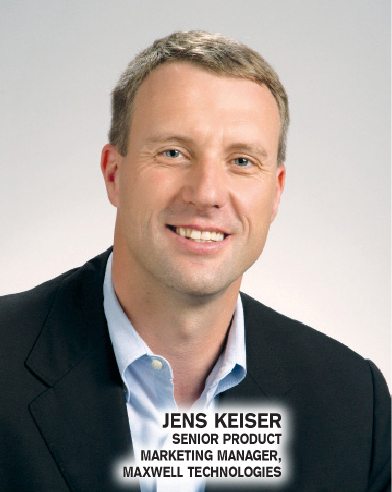 Ultracapacitors, in combination with batteries, present automakers the opportunity to build lighter, sleeker automotive architectures. Ultracapacitors have seen rapid success in start-stop systems and are making their way towards other technologies including electric turbochargers and active suspension.

Q. Why have these been successful in start-stop systems?
A. An ultracapacitor enables micro-hybrid start-stop systems to reduce fuel consumption and emissions by shutting off the car’s internal combustion engine as the vehicle slows down. It then seamlessly restarts the engine when the driver engages the clutch or touches the accelerator. Because the ultracapacitor provides burst power to restart the engine, it takes tremendous burden off the battery, thereby relieving the battery of high current and repetitive cycling that often shortens battery life.

Q. Any other designs where ultracapacitors are used?
A. Other than start-stop, ultracapacitors currently provide cranking power for heavy diesel trucks transporting goods across the USA.

Our engine-start module replaces one lead-acid battery, providing cranking power for Class 7-8 and Class 3-6 diesel trucks for temperatures as low as -40°C to as high as 65°C.

Q. How integrating ultracapacitors in turbocharged engines could benefit original equipment manufacturers?
A. Newer, stricter emissions and mileage mandates are pressuring auto manufacturers to discover ways to increase fuel economy without sacrificing performance and quality of the driving experience. One of the most promising approaches is to integrate downsized turbocharged engines as a method for increasing fuel efficiency without compromising power output.

According to Navigant, 75 per cent of Ford gas and diesel engines and 85 per cent of Volkswagen engines were turbocharged as of 2014 model. Similar installations are underway at Audi, Volvo and others. In the next generation of vehicles made in the USA and abroad, testing ultracapacitors for this application will likely show that these are able to handle additional current and cycle loads of an electric turbocharger.

Q. Any other areas where this is likely to be adopted?
A. Active suspension is another area that will most likely adopt ultracapacitor technology due to the system’s requirement for high power but low energy demand. Active suspension improves fuel economy, makes energy regeneration possible and provides faster response time.

Q. Can ultracapacitors replace batteries in automobiles?
A. Ultracapacitors work collaboratively with batteries and together the devices can make a winning solution. The ultracapacitor can augment battery performance, taking on high-power functions so that the battery can do what it does best—supply energy to the functions that need it over longer periods of time.

Q. What is the future for ultracapacitors?
A. Ultracapacitors are building a proven track record in start-stop and engine cranking, and these have tremendous opportunity to improve upon technologies such as e-turbo and active suspension.