In this interview, we take a look at what programmable SoCs powered by field programmable gate arrays (FPGAs) can offer a design engineer. Ramani Sundaresan, managing director, India, and Bryan Fletcher, global technical marketing director, Avnet Electronics Marketing, speak with Dilin Anand of EFY at the X-Fest 2014 event in Bengaluru 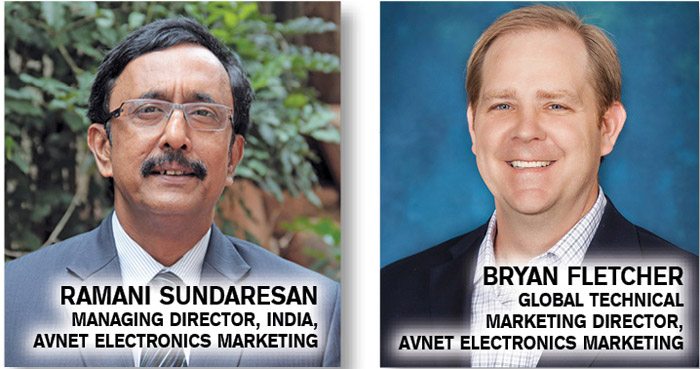 Q. What is one exciting development that you feel has made things easier for design engineers?
A. One area where we felt we needed to do something new was in the area of system on modules (SoMs). It would have made it easier for the design engineers if they had a pre-packaged module that allowed them to take that particular module and use it immediately, without having to design the whole circuit, allowing them to get to the market faster and reduce some risks in their projects.

Q. What design challenge actually brought up this idea of bundling an FPGA with a processor based SoM?
A. In the past, we have seen cases where application developers realised that they needed some of the advantages of the processor and some of those from the FPGA, resulting in these engineers putting processors along with FPGAs next to each other on a single PCB. This brought up the challenge of how to interface between these two.

Q. Are there any specific systems that could only be designed using the benefits of the FPGA-powered SoM?
A. An interesting example is the sensor-fusion application. It has different types of sensors, like temperature, humidity, pressure, vibration, frequency and ultrasound. All these sensors, each with potentially different interfaces, are able to feed into a device, like Zynq, because it has numerous programmable logic inputs/outputs that give a wide variety of interfaces. You can also use the same device to drive a liquid crystal display panel that has a touch-screen, and you can mount an HD camera that is doing real-time 1080P 3D vision kind of applications, all at the same time.

Q. Can you walk us through the process of making a product faster by moving to an FPGA based SoM?
A. To achieve this, you need to take the C code that may be present in your processing system and get it into the programmable logic, which is typically built out of Verilog and VHSIC hardware description language (VHDL). For this, you would either need to find the piece of intellectual property (IP) similar to the algorithm you were performing in the processor or you can take advantage of some newer tools, like the high-level synthesis (HLS) tool where you can take the C code and synthesise it into the FPGA hardware. Next, you need to take the pieces that you want to accelerate, move these into the programmable logic and keep communication channels flowing freely between the two pieces.

Q. Any remarkable application that has surprised you?
A. We met one design team that has used SoMs to create a specialised water and light emitting diode display to further create an interesting art piece. This was designed in Asia and the team has started making these for commercial use now.