We have all heard of many software and hardware techniques to reduce power consumption. This interview takes a look at two impressive technologies that take power saving to a whole new level. Let’s see how 3D motion capture technology and power systems in a package can help save energy in your next design.

Vijay Ullal, president and COO, and KN Kim, regional VP from speak with Dilin Anand. Founded in 1957, Fairchild is considered to be the seminal semiconductor company, considered by some to be the first trillion-dollar startup. Their first product was the world’s first commercially viable integrated circuit, which disrupted everything before it. 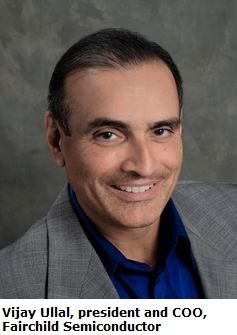 The fashion one is dangerous to do business in because it can come and go with the whims of the masses. The invisible one however, is where we are playing because it is about adding value all the time.

Q: What can you say about sensor fusion and the challenges that developers face?
A: Sensors are inherently inaccurate. Let me give you an example. Pressure sensors are open to the environment. Let’s say you open this door very hard, it will have an effect on the pressure sensor on the motion tracker on your wrist — it looks like you have gone up and then suddenly you went back down. Let’s say you wave your hand around; it will think you’re moving. You also have other sensors like accelerometers, gyros, GPS and other RF signals. The idea with sensor fusion is to take all these signals together and get the right information. You combine them, add the proper algorithms and you are finally able to obtain all the right information with lower power consumption. Something like this can be found in an electronic gadget that has an apps processor and sophisticated software and algorithms. They already have the smarts needed for sensor fusion. However there are many machines that don’t have these smarts and that’s where we come in. We can provide the entire solution and the optimal partitioning of the system between hardware and software.

Q: What has your team done that is truly innovative in this market with an aim to help save power?
A: We are investing in motion tracking solutions that design engineers can implement in their designs to save energy.

Q: How does motion tracking help an engineer to save power?
A: Let me explain to you where specifically an example of motion tracking helps in terms of energy. W have 3D motion capture technology, right? With this you can get very accurate positioning of something. So let’s say you put a 3D motion tracking into harvester. Just an example, you can do really precise harvesting without losing through unnecessary motions or movement. Using the data from these sensors, we are able to stick to the most efficient path and not miss anything.

Q: How exactly does that data help in making precise movement?
A: When you have to use some combination of GPS and six inertial sensors, it gives you really accurate positioning, and you can get really accurate data as to where the thing is, how fast it moves and whether its efficient enough. If something goes wrong — if it’s going too slow or it’s going off direction — you can figure these things out quickly.

Q: Could you give us an example of how this helps in a real world situation?
A: I’ll give you an example with ships. Do you know that often, only the top of the mast of sailing ships catches wind while the rest of it is wasted? Now in order to catch more wind we could try to increase the height of the mast but then it would cause the ship to capsize. This is the reason most ships moved from wind to diesel power more than a century ago. We can bring back wind power with a sail high up in the sky with a 3D motion capture system as well as a steering mechanism on the ship also equipped with a 3D motion capture system. This reduces diesel consumption by up to 40 per cent.