What Is Artificial Intelligence (AI), And What Are Its Various Applications?

AI emphasises on making intelligent machines work and react like human beings, including speech recognition, planning, problem solving and learning. It involves programming intelligence or making computers behave like humans. AI-powered devices try to imitate the natural intelligence of humans, mimicking the cognitive functions that humans use to perform tasks.

There are many definitions of AI and one such definition given on Wikipedia is, “In computer science, AI—which is sometimes called machine intelligence—is intelligence demonstrated by machines, in contrast to the natural intelligence displayed by humans and other animals.”

AI finds application in robotics, virtual assistants, the Internet, finance and economics, exploration and research, healthcare, education, automotive, video games, defence, businesses and on mobile devices. For more on its applications, please refer to ‘The Latest In AI and Its Applications’ article published in January issue.

There are many AI-based DIY projects using Arduino, NodeMCU and Raspberry Pi available on the Internet.

A simple example is ‘Artificial Intelligence-Based Chatbot For Appliance Control’ DIY article published in November 2018 issue of EFY. It uses NodeMCU and Arduino IDE along with Chatfuel platform to create an AI chatbot. Wiring diagram of the project is shown in Fig. 2. 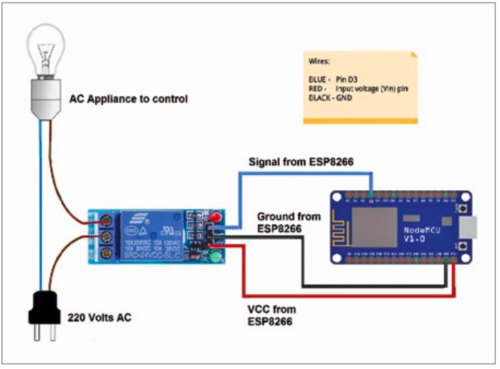 This AI-chatbot is used to control electrical appliances using voice commands from Facebook Messenger. First, add AI rules in Chatfuel by writing all permissible words or phrases a user may use—such as ‘Turn on the light’ or ‘Switch on the light’—for interaction. After the system is connected to the Internet, open the chatbot from Facebook Messenger installed on your cellphone and provide it with instructions using the microphone, to turn the light off or on.