A barcode is a series of parallel black bars and white spaces, both of varying widths. Each combination or sequence of bars and spaces is a code representing information such as product type, size, manufacturer, or origin of shipment. The barcode structure is shown in Fig. 1. 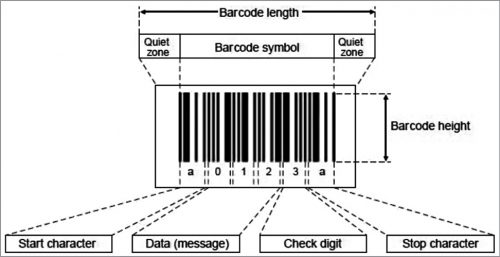 Barcodes usually come in different sizes. The smaller the size of the barcode, the less the number of characters it can encode. 1D barcode, also called linear barcode, can hold around 8 to 25 characters.

The bar patterns representing the data (numerical characters, alphabet, etc) are arranged from left to right. The barcode length defines the total length including the right and left quiet zones. The barcode height recommended is as high as the printer permits. It is recommended to keep the height greater than 15 percent of the barcode length.

A barcode scanner uses an LED or laser as light source to capture the image of the barcode, and the decoder decodes and passes it on to a computer in traditional data format.

A study has found that rapid fluctuations in light source seriously interfere with the barcode scanner, thereby degrading the reading performance. The interference typically generated in the LED driver by a switched mode power supply (SMPS) has frequencies up to several MHz that can seriously affect the barcode reading performance. However, so far there is no clear evidence or study that supports the external radio frequency signals affecting the performance of a barcode scanner.