The ionosphere is a part of the upper atmosphere, from about 85 km to 600 km altitude, comprising portions of the mesosphere, thermosphere, and exosphere, thermosphere and exosphere, distinguished because it is ionized by solar radiation. It plays an important part in atmospheric electricity and forms the inner edge of the magnetosphere. It has practical importance because, among other functions, it influences radio wave Propagation to distant places on the earth.

In a region extending from a height of about 90 km to over thousands of kms, most of the molecules of the atmosphere are ionized by radiation from the Sun. This region is called the ionosphere.

At greater heights- intensity of ionizing radiation is very high, few molecules are available for ionization, ionisation density is low

As height decreases- more molecules are available due to reduced atmospheric pressure, ionization density is higher (closer to the earth)

But as height decreases further, ionization density decreases though more molecules are available since the energy in the ionizing radiation has been used up to create ions.

Hence, ionization is different at different heights above the earth and is affected by the time of day and solar activity 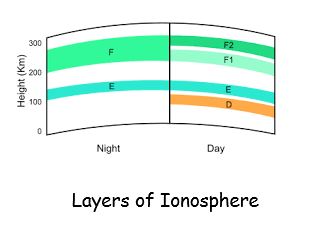 There are three main regions within the ionosphere:

Day and night structure of the ionosphere 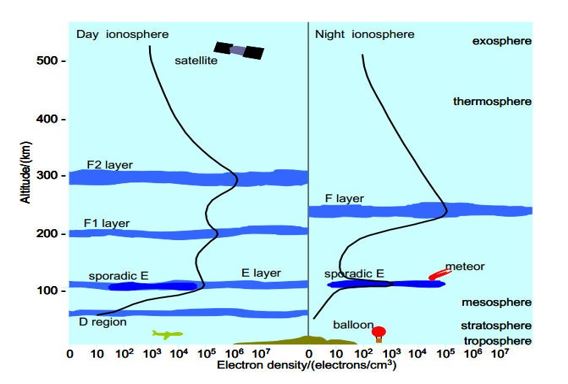 Variations in the ionosphere

Because the existence of the ionosphere is directly related to radiations emitted from the sun, the movement of the Earth about the sun or changes in the sun’s activity will result in variations in the ionosphere. These variations are of two general types:

The regular variations that affect the extent of ionization in the ionosphere can be divided into four main classes: daily, seasonal, 11-year, and 27-day variations.

The D layer reflects VLF waves; is important for long range VLF communications; refracts lf and mf waves for short range communications; absorbs HF waves; has little effect on vhf and above; and disappears at night. In the E layer, ionization depends on the angle of the sun. The E layer refracts HF waves during the day up to 20 megahertz to distances of about 1200 miles. Ionization is greatly reduced at night. Structure and density of the F region depend on the time of day and the angle of the sun. This region consists of one layer during the night and splits into two layers during daylight hours.

It is a very variable layer and its height and density change with time of day, season, and sunspot activity.

Seasonal: Seasonal variations are the result of the Earth revolving around the sun; the relative position of the sun moves from one hemisphere to the other with changes in seasons. Seasonal variations of the D, E, and F1 layers correspond to the highest angle of the sun; thus the ionization density of these layers is greatest during the summer. The F2 layer, however, does not follow this pattern; its ionization is greatest in winter and least in summer, the reverse of what might be expected. As a result, operating frequencies for F2 layer propagation are higher in the winter than in the summer.

Eleven-Year Sunspot Cycle: One of the most notable phenomena on the surface of the sun is the appearance and disappearance of dark, irregularly shaped areas known as SUNSPOTS. The exact nature of sunspots is not known, but scientists believe they are caused by violent eruptions on the sun and are characterized by unusually strong magnetic fields. These sunspots are responsible for variations in the ionization level of the ionosphere. Sunspots can, of course, occur unexpectedly, and the life span of individual sunspots is variable; however,a regular cycle of sunspot activity has also been observed. This cycle has both a minimum and maximum level of sunspot activity that occur approximately every 11 years.

During periods of maximum sunspot activity, the ionization density of all layers increases. Because of this, absorption in the D layer increases and the critical frequencies for the E, F1, and F2 layers are higher. At these times, higher operating frequencies must be used for long distance communications.

27 Days Sunspot Cycle: The number of sunspots in existence at any one time is continually subject to change as some disappear and new ones emerge. As the sun rotates on its own axis, these sunspots are visible at 27-day intervals, the approximate period required for the sun to make one complete rotation.

Irregular variations in ionospheric conditions also have an important effect on radio wave propagation. Because these variations are irregular and unpredictable, they can drastically affect communications capabilities without any warning.

Sporadic E: Irregular cloud-like patches of unusually high ionization, called sporadic E, often form at heights near the normal E layer. Exactly what causes this phenomenon is not known, nor can its occurrence be predicted. It is known to vary significantly with latitude, and in the northern latitudes, it appears to be closely related to the aurora borealis or northern lights.

At times the sporadic E is so thin that radio waves penetrate it easily and are returned to earth by the upper layers. At other times, it extends up to several hundred miles and is heavily ionized.

These characteristics may be either harmful or helpful to radio wave propagation. For example, sporadic E may blank out the use of higher, more favorable ionospheric layers or cause additional absorption of the radio wave at some frequencies. Also, it can cause additional multipath problems and delay the arrival times of the rays of rf energy.

The sporadic E can form and disappear in a short time during either the day or night. However, it usually does not occur at the same time at all transmitting or receiving stations.

Sudden  Ionospheric Disturbance (SID): The most startling of the ionospheric irregularities is known as a SUDDEN IONOSPHERIC DISTURBANCE (SID). These disturbances may occur without warning and may prevail for any length of time, from a few minutes to several hours. When SID occurs, long distance propagation of hf radio waves is almost totally “blanked out.” The immediate effect is that radio operators listening on normal frequencies are inclined to believe their receivers have gone dead.

When SID has occurred, examination of the sun has revealed a bright solar eruption. All stations lying wholly, or in part, on the sunward side of the Earth are affected. The solar eruption produces an unusually intense burst of ultraviolet light, which is not absorbed by the F2, F1, and E layers, but instead causes a sudden abnormal increase in the ionization density of the D layer. As a result, frequencies above 1 or 2 megahertz are unable to penetrate the D layer and are usually completely absorbed by the layer.

Ionospheric Storms: Ionospheric storms are disturbances in the Earth’s magnetic field. They are associated, in a manner not fully understood, with both solar eruptions and the 27-day intervals, thus corresponding to the rotation of the sun.