Green IT And Electronics: A Need Of The Hour

Green information technology (IT) aims at designing and manufacturing such communication devices and electronic products that are environment friendly and support energy conservation. This article covers various aspects of green IT, including key components and recent findings, to create a better understanding among people.

In the present digital era, we are surrounded by several electronic devices such as mobile phones, computers, tablets, laptops, and other e-gadgets that form major part of our lives. These devices have revolutionised the way we work, spend our free time, or communicate with each other. This digital transformation has been possible only due to huge contributions by researchers, engineers, and scientists.

However, there is a big question that needs to be answered. Are we really ready for these changes? Do these changes have a negative impact on our life? The major drawback that can be inferred from this digital transformation is huge power consumption and its implication on the environment. This particular drawback and its related effects have given rise to the concept of green computing, green IT or green electronics.

What is green IT?

Green information technology (IT) aims at minimising the negative intervention of IT operations or functionalities with the environment by designing, manufacturing, and using IT, electronics, or communication devices that are environment friendly and support energy conservation. Green IT not only deals with energy-saving or less power consumption but also focuses on e-waste reduction.

In 1992, this concept evolved when the US Environmental Protection Agency launched a voluntary labelling programme that helps organisations save money and reduce greenhouse gas emissions by identifying products that offer superior energy efficiency.

Green computing is based on motives like conservation of energy and natural resources, reduction in usage of hazardous materials, recycling of e-waste, promotion of biodegradability, virtualisation, and usage of energy-efficient products (Fig. 1).

Components of Green IT

There are certain key components that form the base of Green IT. These components are inclusive of technologies like cloud computing, virtualisation, green networking, and re-designing of data centres (Fig. 2).

The major components are described as follows:

The enormous amount of data generated every day needs to be stored and processed in huge data centres. Thousands of computing systems in these data centres are established with gigantic cooling infrastructures because these systems have high power consumption and generate a large amount of heat, thereby consuming enormous amount of energy per day. In fact, according to some sources, if we try to group all these data centres to form a single country, the country formed may stand fifth in the list of countries that consume most energy in the world.

And there is no doubt that these scaring figures are just going to get worse with time in coming years. Hence, it is quite important to devise new technologies that are much greener and based completely on different mechanisms.

It is estimated that there will be nearly ten times increase in data creation by 2025. But until and unless we bring in greener architectures, this would result in a huge generation of greenhouse gases and carbon footprints. The data centres would be considered green only when they fulfil the following paradigms:

Innovation in the redesigning of data centres has begun in some countries. Companies like SuperMicro have introduced resource-saving architecture, which minimises e-waste, pollution, power consumption, and much more. Intel has come up with energy-efficient data centres that reduce power consumption.

When we use green and energy-efficient devices in order to minimise resource utilisation in the branch of computer networking, it is called green networking. It deals with energy-efficient communication strategies with respect to the environment. For instance, we can utilise energy on the Internet by setting routers to sleep mode in low traffic periods and then utilise the same router for multiple purposes. The green networking can be practiced in the following terms:

Cloud computing is one of the hottest trends in the IT market these days. It delivers on-demand computing services—from applications to storage and processing power—typically over the Internet and on a pay-as-you-go basis.

Evolution in cloud computing in coming years will lead to the utmost resource utilisation by resource sharing. Instead of buying multiple systems for different operating systems, one can buy just one operating system (OS), set it up online on the cloud, and operate it liberally. This also helps in reducing the amount of e-waste generated.

A virtual box installed on a computer system can do wonders these days. One can buy resources online from vendors and install a virtual box, irrespective of its compatibility with the system and thereby enjoy all sorts of services. Virtualisation indeed is one of the most important pillars of green computing. 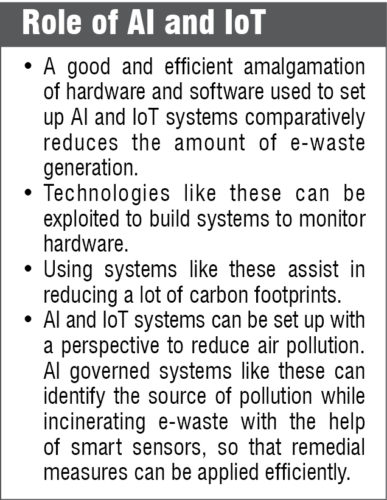 To promote green computing concept, the following approaches are employed:

As we all know, electronics forms the base of IT. Green electronics is a way of emphasising on disposing of hazardous substances that come from electronic waste or e-waste by using eco-friendly techniques. The e-waste is nothing but the waste generated by electronic products like computers, mobile phones, television sets, cables, wires, batteries, etc. E-waste consists of elements like As, Cd, Pb, and Hg and compounds like plastics, CFCs, PVCs, etc, that are hazardous.

The ewastes are usually disposed of by burning. The whole process is subject to a lot of emissions, which makes the environment poisonous and unfit, inviting unwanted acid rain, global warming, and other environmental concerns.

According to Green Electronics Council (GEC), the modern-world IT contributes a lot to e-waste due to invention and production of IT products made up of toxic substances. The EPEAT, or Electronic Product Environmental Assessment Tool, launched by GEC, ensures that only sustainable IT products are designed, manufactured, and purchased. GEC ensures that both manufacturers and large scale purchasers:

EPEAT is the leading global eco-label of the IT sector. National governments, including the United States and thousands of private and public institutional purchasers around the world, use EPEAT as part of their sustainable procurement decisions.

Many companies have come up recently with their focus on environmental protection. Some of these are:

Started in 2008 in Noida, Attero Recycling is one of the few companies in the world working on proper e-waste management.

It is a Bengaluru based EV startup that manufactures its own e-scooters and offers charging infrastructure through the ‘Ather Grid.’

It is a Bengaluru based startup that aims to prevent traffic congestion and air pollution by manufacturing a number of bicycles and lightweight electric two-wheelers governed by technologies like artificial intelligence (AI), machine learning (ML), and the Internet of Things (IoT).

Recent findings and initiatives on green IT and electronics

Many researchers worldwide are investigating various areas in order to find some ways of altering architectures of these IT devices to bring in energy-efficient methods of computation, communication, or data transfer. Analio Fernandez and his fellow researchers at Cambridge University have tried to investigate the same by using nanotechnology and magnetisation. IT revolution has been possible due to the development of miniature integrated circuits (ICs) that are based on millions of transistors, which are, in turn, formed on silicon chips.

These light but powerful devices are reasons for high amounts of processing in any electronic device, but this leads to high power consumption as well. These silicon chips, which form a major part of computers, are nano-metric in size. The bits of information are stored in the form of an electrical charge in capacitors. Computation bits keep moving from memory to processors and again move back to memory after processing.

As we are wasting a lot of energy in continuous energy supply and movement of bits back and forth between memory and processor, current computing architectures need to be more efficient.

Hence, researchers have come up with the idea of using magnetic nanostructures for green computation. Special attention is given to the magnetic nanowires, which are several microns long and have a nano-metric diameter. Since these are long enough, bits in large numbers can be stored in the form of packages. These bits can then be moved as packages with a small amount of electrical energy, as these wires are already magnetic and do not need continuous energy supply. Hence, this idea makes computations greener and efficient.

Researchers from Cambridge and collaborators from the US and Spain are investigating three-dimensional nano-fabrication of silicon chips using electron microscopes, which are one of the most versatile tools in nanotechnology. The purpose of this investigation is to bring a radical change by increasing the storage capacity of silicon chips through 3D fabrication. The usual chips are fabricated in a plane, that is, these are two dimensional and hence have less storage capacity.

These researchers from Cambridge have tried to combine electron microscopic processes (electron emissions) with gases in order to use these microscopes as 3D nano printers for the purpose of 3D fabrication. The same group is investigating the properties of nanomagnetic wires for computations, but they are facing a couple of challenges. First, the materials needed must be of good quality for better data flow. Second, 2D nanostructures have limited memory storage capacity. Still, researches and works like these are undoubtedly the stepping stones in the field of green computing and need major attention.

In India, the Ministry of Electronics and Information Technology (MeitY) has sponsored mega facility on nanoelectronics led by IIT Bombay and IISc, called the Centre of Excellence in Nano-electronics (CEN). They work on nanofabrication and development of devices for low power consumption, energy-saving, nano-biosensing, and communication in the domain of healthcare, communication, agriculture, and IT.

India has shown quite a positive response towards green IT and electronics. It has already become one of the major concerns for investors, manufacturers, policymakers, and other stakeholders to adopt green IT methodologies and upgrade the existing infrastructure in related companies across India and make it energy-efficient. The achievements of the Indian government, with respect to green IT and computing in India, are as follows:

1. The government of India included green IT in 12th Five-Year Plan with a few guidelines for IT and telecom industries in India such as:

2. Global ICT Standardisation Forum for India was introduced in order to focus on the development of ICT (Information and Communication Technology) and bridge Indian achievements globally.

4. Advanced metering infrastructure, distribution automation, and distributed energy resources, which form an integrated set up of ICT, yield a lot of benefits with respect to power consumption.

It is quite exciting that we can get really close to green computing and electronics with devices in our hands, which are based on greener technologies, processors, and memories designed with smart architectures. Green IT would make these devices less dependent on energy and hence help save energy for the betterment of environmental sustainability.

Moreover, this would not only reduce the amount of e-waste but also help save natural resources like water, which is used as a coolant in data centres. However, there is still a long way to go, and we all need to be conscious about energy and environmental concerns as well.

Subhranshu Sekhar Samal is currently the head and coordinator for programme management unit (PMU) of ARCI, Gurugram. He is a regular writer for EFY

Amrita Samal is currently working for environmental protection, scientific outreach and career counselling. She is co-founder of Evergreen Association, Odisha

Ashank Bharati is a mobile developer at Nuclei, Bengaluru