Putting Electronics Of Brain Waves To Use

Understanding brain waves coupling with electronic components is crucial not only to collect information about brain signaling but also to diagnose and treat neurological disorders and diseases. Imagine seeing the brain activity in real-time, while meditating or while feeling stressed at work, and being able to adapt to get better results.

Understanding the working capacity and control of human brain is an everlasting topic and, recently, scientifically and technologically, much progress has been made in this direction. Scientists are always making efforts towards understanding the building blocks of brain and its working. Although, nothing is certain about the construction and functioning of brain in all other living organisms—just for comparison with the human brain—it is well established that human brain is composed of neurons having possibility of all kinds of different internal states depending on the input.

Human brain works on the electric power of its neurons, which comes from food and environment. The electrical power of brain is very small and limited, but it acts in very specific ways that are characteristic of the human brain. Brain’s electrical activity is displayed in the form of brain waves of different frequencies corresponding to different situations of mind; the root of all our thoughts, emotions and behavior is the communication through brain waves between neurons in the brain.

It is well known that our brain not only controls the functioning activities of each and every part of our body, but the brain waves can also be used to affect living and non-living objects through telepathy, telekinesis, hypnotism, intuition, love at first sight, etc. Now, it is becoming possible to operate advanced and smart electronic devices with brain waves.

Wave function was supposed to be a characteristic of particles at quantum level, but in 1924, Louis de Broglie (Nobel Prize in Physics in 1929) proposed that a wave function is associated with all particles. The standard interpretation from the intensity of a wave function of a particle at any point is the probability of finding the particle at that point. The wavelengths of the harmonic waves are used to build the wave function called a matter-wave.

Thus, matter waves are a central part of the theory of quantum mechanics leading to the wave-particle duality hypothesis. According to that, all matter can exhibit wave-like behavior. For example, a beam of electrons can be diffracted just like a beam of light or a water wave. A wave (mechanical or electromagnetic) can be described as a disturbance that transports energy from one location (its source) to another location, with or without a medium, but without transporting matter.

Electromagnetic (EM) waves are generated as a result of vibrations between an oscillating electric field and a magnetic field. The entire EM spectrum includes waves representing from the lowest to the highest frequency (or longest to shortest wavelength), that is, all radio waves, microwaves, infrared radiation, visible light, ultraviolet radiation, X-rays and gamma rays. However, matter waves of very low frequency (beyond EM spectrum) do exist but are difficult to detect and differentiate. All waves are made up of photons that travel through space and interact with matter, giving rise to various phenomena like absorption, reflection, interference and diffraction.

The human brain emits electrical waves, which produce different effects on the body. Practically, the distinction between the brain waves is difficult due to the presence of different frequencies. There are four brainwave states common to the human species, which range from the high-amplitude, low-frequency delta to the low-amplitude, high-frequency beta. These brain wave ranges specify different states of human mind, from deep sleep to high arousal. Neuroscientists have named these waves as shown in the table. 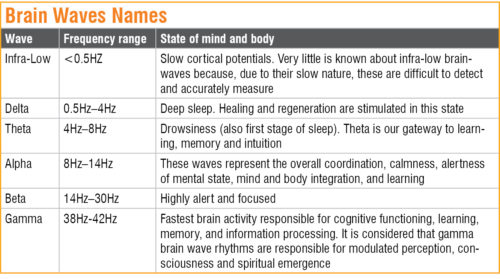 The electrical oscillations called brain waves have intrigued scientists and the public for a long time, and their function is still debated. The propagation of brain waves within brain as well as outside brain, and their (propagation) effects are under investigation. Scientists and engineers are putting their sincere efforts for developing and designing suitable instrumentation for the detection and monitoring of brain waves.

The neurons in the brain transmit signals and a voltage is formed that the electrodes detect and transmit onwards through a tiny amplifier. Electroencephalography (EEG) is a well known and established electrophysiological monitoring method to record electrical activity of the brain. EEG is a non-invasive method with the electrodes/sensors placed along the scalp. However, invasive electrodes are also being used in what is known as electrocorticography technique of brain monitoring.

Advances are being made towards the development of invasive technology of brain recording as well. In the times to come, seamless and minimally invasive three-dimensional interpretation of electronics of brain could allow for continuous monitoring and manipulation of brain waves and their properties and effects. Thanks to non-invasive tools that have been around for decades, such as EEG and functional magnetic resonance imaging (fMRI), physicians and neuroscientists can measure changes in the brain without drilling a hole in the skull. Thus, the next technology to pervade our lives may be the so-called neural interfaces.

Understanding brain waves coupling with electronic components is crucial not only to collect information about brain signaling but also to diagnose and treat neurological disorders and diseases. Human tissue being elastic and mobile, damage and inflammation can arise at the interface with rigid electronic components. Therefore flexible electronics is needed to not only provide useful means for conforming electronics free from such problems but also take it to non-planar surfaces.

For long-term stable neural recording, scientists have developed a new conductive bio-compatible material that is as soft as human tissue and can be stretched to twice its length. The material consists of gold-coated titanium dioxide nanowires, embedded into silicone rubber.

Use of electronic implants is progressing and scientists have developed methods to inject microelectronic devices such as wires and transistors directly into the brain to measure or stimulate neural activity. Neuro-philic electronic sensors are one million times more flexible than any state-of-the-art flexible electronics. These have sub-cellular feature sizes and actually like to interact with neurons.

We have seen pictures of people lying in giant machines (MRI and CT-scan) that record brain activity, or a man running on a treadmill with dozens of little wires attached to his muscles. These devices making use of brain waves are usually big, expensive and can be operated only by trained people. That could be a thing of the past as we can now record the same activity using much smaller, inexpensive and easy-to-use wearable devices.

We are at a point now where we can purchase our own devices, measure our brainwaves and adjust our lives more effectively to deal with stress and improve our focus. We can attach these wearable devices to our body in order to measure physiological activity like heart rate, body temperature, respiratory rate, muscle tension, and brain waves known as biofeedback.

Imagine seeing the brain activity in real-time, while meditating or while feeling stressed at work, and being able to adapt to get better results. The activity measured using EEG can be very detailed and complex, and dependent on the area of the brain. Biofeedback headsets measure the brain waves using EEG, and these are small bands that sit easily on our head and measure activity through sensors. Some of such headsets available in the market are discussed here.

It is an EEG headband that connects to the devices through Bluetooth to track the brainwaves. Its excellent iPhone/Android app has also been updated.

It is the first wearable device that actively elevates mood and lowers stress, and claims to boost energy levels without sugar, caffeine or other stimulants. It is worn on forehead and back of the neck. It uses electromagnetic impulses that stimulate cranial nerves on the face and back of the head to improve mood.

It is the cheapest option that comes with a big library of apps and programs to run with.

Electronics of brain waves outside the body

Many people question the existence of brain waves and say that electrical impulses in the brain don’t ever get outside the body. Electrical impulses are well known to travel inside the brain and to the rest of the nervous system. But brain waves not only play an important role inside the human body, their energy can be used to make wonders outside the body as well for controlling electronic devices/displays, telekinesis, hypnotism, etc.

The energy of brain waves (as wave function) in the open will also suffer different energy losses like attenuation, absorption, dispersion and scattering, and so energy of the waves will decrease fast with distance and time. However, with strong concentration/meditation to generate brain waves of required energy level, one can perform the activities mentioned below.

It is one of the bases of many super powers in human beings, which is often used for controlling/manipulating of matter. Telekinesis is a general term for any ability that involves using the mind to influence/manipulate/move matter or objects. Further, it may evolve to the point where it can control anything at a subatomic particle to universal level.

The electrical nature of the brain allows sending and receiving of brain waves as electrical pulses. These can be delivered in a non-invasive way using a technique called transcranial magnetic stimulation (TMS). Using a combination of technologies like EEG, the Internet and TMS, researchers are able to transmit a thought over a very large distance, such as from India to France.

Recent advances in brain-computer interface are turning the science fantasy of transmitting thoughts directly from one brain to another into reality. In this field, brain-to-brain interfaces allow direct transmission of brain activity in real time by coupling the brains of two individuals. Users want to control electronic devices through brain waves without use of even hands, which brain-computer interface is now enabling.

It is based on the use of brain waves for guided relaxation, intense concentration and focused attention, to achieve a heightened state of awareness that is sometimes called a spell. During hypnotic spell, a person’s attention is so focused that anything going around the person is temporarily blocked out or ignored.

Working of our brain cells, or neurons, using electrical signals to communicate and coordinate for higher brain function as well as brain influence outside the brain itself are the biggest questions in all of science. Recently, researchers have been able to design an electronic chip capable of performing high-sensitivity intracellular recording involving thousands of connected neurons simultaneously, identifying hundreds of synaptic connections of brain. With such developments in science and technology, may be in near future, we will be able to understand more about the electronics of brain and brain waves.