Autism is increasing at a tremendous rate among children in India. Children with autism suffer from varied deficiencies in skills and learning disabilities. It’s important to detect it at early stages, or else, children might suffer for the rest of their lives.

One of the most worrying aspects among children in India is the increase in the incidence of autism in recent times. From what was thought to be one in 500 children having autism, today, the number is standing at a staggering one in 68 children. To compound the issue, 40 per cent of children with autism don’t speak, and this leads to chances of non-detection or late detection. Autism is visible from the age of one to three years of a child’s life. In a few instances, it is visible even earlier. If autism is not detected at early stages and addressed, children suffer later in their lives. Some of the myths and the reality related to autism is shown in the box below.

Treating autism is effective when it is detected earlier in a child. Some of the symptoms that a child with autism exhibits are:

In general, these are called ‘Triads of Impairments.’ The level at which autism spreads across a spectrum varies from person to person. Evaluating the children with a country-specific evaluation process will help in identifying the level to a large extent. One key aspect that we need to keep in mind is that 80-90 per cent brain growth happens in childhood, so unless the detection and training are done in the early stages, things can become more difficult. 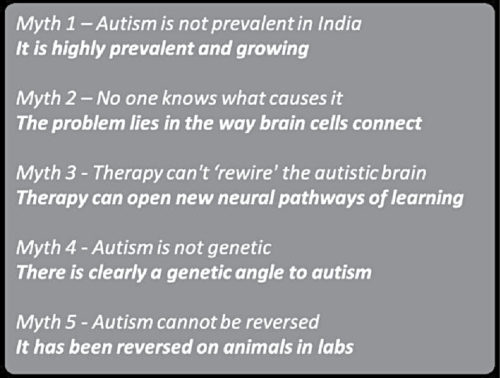 Children with autism suffer from varied deficiencies in skills and learning disabilities. In simple language, autism interferes with the child’s:

These impairments are typically explained by a simple graphic shown in Fig. 1.

One of the most important skill sets that mostly affect the children is psychomotor skills. Psychomotor learning is the relationship between cognitive functions (consciously involved in functioning) and physical movement. Psychomotor learning is demonstrated by physical skills such as the movement of limbs, coordination, manipulation, dexterity, grace, strength, speed. Most children with autism have challenges in these skills at different levels.

Psychomotor skills deal with the actions using hands, fingers, wrist, etc. These skills have a great impact on the day to day life of children with autism. Improving these skills to a level so that they can manage their daily activities is a must for the better future of the child. Children with autism encounter objects that vary in shape and size daily. Unless they have good psychomotor skills, they face challenges in using those objects in their day to day lives. Normally, these skills are imparted and enhanced through training with special educator’s help, who is trained in this.

Conventional training of a child with autism involves a three-step process.

1. In the first step, the trainer demonstrates a child on how a particular activity, which involves a specific psychomotor skill, is done (violet dotted line and numbered as 1)

2. In the next step, the trainer holds the hand of the child and teaches him/her how to perform an activity (red dotted line numbered as 2)

3. In the last step, the trainer makes the child perform an activity with or without verbal cues (blue dotted line numbered as 3)

The important point to note is the absence of feedback to the child for its actions. This leads to longer training duration and also relatively lesser retention of the skill learnt. It is also very important to note that the role of the trainer is more of a facilitator, and he is not directly responsible for the outcome of training. The challenges in this training process are mainly due to the lack of feedback to a child for his actions.

Robot based training (Genesis and development)

It is observed that there are a few important factors that affect the psychomotor skills of a child with autism and these are:

As we can see, there are three factors that play a key role in the conventional training process. The search for additive methods to improve the training leads to the use of robots in training children with autism. Unlike the common imagination of ‘humanoid robot’ training the child, research proved the need was for specific (dedicated) robots for training in specific psychomotor skills. The authors spent five years in this field and developed a series of robots to train children with autism in most of the skills needed for day-to-day living.

The research that was carried out on over sixty children with autism proved the effectiveness of the training. This robot-based training improved the training efficiency by sixty per cent and, in addition, it resulted in the child’s ability to retain the skill learnt. The reasons for improvements in the training process using robots are:

• Uses the trainer (OT/special educator) as the anchor and child in its comfort zone. The additional benefit of the robot-based training is that the parent of the child with a little training can augment the sessions to improve the effectiveness as the robots are easy to use, thereby increasing the comfort level of the child

• Immediate audio-visual feedback by way of lights, sounds (like claps, appreciation, etc) reinforces the skill executed and the child is encouraged to try again and it leads to retention of the skills learnt.

Robot-based training of children with autism is through special educators but augmented with special-purpose robots. The best way to understand the robot-based training is explained in Fig. 3. The process is the same as the conventional three-step process.

However, in every step, feedback is given to the child, which improves the effectiveness of the training.

This robot-based training system augments the conventional training process with two major unique functions. One is the activity interface and the other is the audiovisual feedback.

1. Every robot used is unique and specific for activity and its associated psychomotor skills. It is custom designed and uses a dedicated user interface

What is unique with these robots?

Typically, developing children have a multitude of psychomotor skills, which they pick up as they grow; sometimes through training or even toys and games. However, in the case of children with autism, they need a lot more help with it as they have to be trained specifically. They are basically not aware of what they are capable of.

There are 28 to 32 psychomotor skills that are essential in the day-to-day life of a child. Instead of putting all the skills into one single robot, which increases the complexity of use as well as the load on the trainer, these robots are designed to address one activity each so that the child learns it quickly.

Uniqueness is also driven by the fact that the feedback mechanism needs to be unique and customised for each skill. In addition, these robots should have measurement mechanisms to measure the performance of the child by way of measuring the time spent on each activity and log them for analysis and to monitor progress.

In addition, since the robots should be capable of being distributed on larger geography, they need to be intelligent. These systems should use the Internet of Things (IoT) architecture to run and manage the whole set of robots. This approach also should be driven by the fact that owning a robot for each child can be an expensive proposition.

The output of this research proved that the use of robots for training children with autism resulted in three important outcomes: