There are lots of ways to construct qubits. Collaboration between academia and industry is going to play a major role in how this shapes out. Depending on each of their strengths, academic labs can focus on supplying the core expertise necessary to get a quantum computer going while the industry can provide the engineering muscle to build such an intricate machine.

Qubits are at the heart of quantum computers that use the properties of quantum physics to store data and perform computations. These computers are believed to be able to solve certain critical computational problems substantially faster than the classical computers in use. Hence there is a huge interest in them and many countries are investing in building them.

This article updates the list of global players in the field and describes some of the new technologies that are being developed. So far, the small prototypes of quantum computers that have been developed by academia and industry in the USA and some other countries have affirmed the proof-of-concept for investing in their further development. 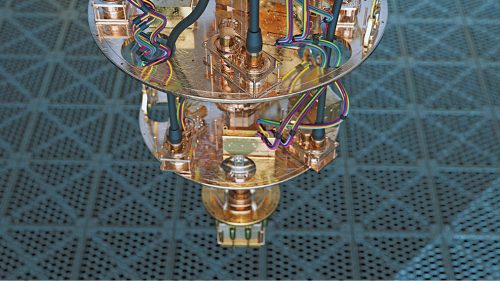 Advancements made by some of the players in the field are summarised below.

1. The Canadian firm D-Wave has announced that it is commercialising its next-generation system, Advantage, built for businesses. The company’s computer is already being used, via its cloud, by some corporations to build and run applications for their operations. Now D-Wave is making Advantage available to other businesses as well.

The system is made of more than 5000 qubits, which is more than double the count of processing units in its earlier 2000Q machine. Each of these qubits will connect with 15 others, increasing the connectivity by two-and-a-half times its predecessor’s, leading to larger, denser, and more powerful graphs for building commercial applications.

4. Microsoft is working on a ‘topological’ quantum computer that relies on the interactions of super-cold electrons.

5. Psi Quantum does its computing with photons that run along waveguides etched onto ordinary silicon chips. It hopes to leapfrog the noisy intermediate-scale quantum (NISQ) technology era entirely and produce a full-fledged quantum computer within the next five years. One of the firm’s founders says that Psi Quantum is already producing wafers full of quantum-computing chips in partnership with Global Foundries, a big contract chip-maker.

6. Q-CTRL, an Australian start-up, has raised tens of millions of dollars from investors including Sequoia Capital and In-Q-Tel. Their engineers have used machine learning to improve hardware-control routines written initially by human beings. This can cut error rates by 90 percent and reduce variability across an individual chip by a similar amount.

7. IBM recently committed to having a functioning 1,000-qubit quantum computer by 2023. With the IBM Quantum Condor planned for 2023, running 1121 qubits to be exact, quantum computers would start to tackle a substantial number of genuine real-world calculations, rather than being restricted to laboratory experiments.

The director of IBM Research hopes to bring error rates down from one percent today to around 0.0001 percent in the Condor processor. It is a bold target considering IBM’s biggest quantum computer to date holds just 65 qubits. The company says it plans to have a 127-qubit machine ready in 2021, a 433-qubit one available in 2022, and a computer holding a million qubits and hopefully a functioning 1000-qubit quantum computer by 2023. One thousand qubits in total still would not be enough to take on full-scale quantum computing challenges, but it would be enough to maintain a small number of stable, logical qubit systems that could then interact with each other.

The classic approach to photonic quantum computing, a linear optical quantum computing, relies on qubits, each based on a single photon. This strategy manipulates photons with mirrors, beam splitters, and phase shifters. Single photon detectors are then used to help read the results of what these devices have done. The problem with this approach is that single photons are difficult to experiment with, generally limiting this strategy to a handful of photons. In contrast, Xanadu’s strategy, known as Continuous Variable Quantum Computing, does not employ single-photon generators. Instead, the company relies on so-called ‘squeezed states’ consisting of superpositions of multiple photons.

Some new technologies that are being explored in the field of quantum computing are described below.

If a stray photon, which is a particle of light, from outside the system were to interact with a qubit, its wave would interfere with the qubit’s superposition, essentially turning the calculations into a jumbled mess—a process called decoherence. It turns out that superconducting cavities made of niobium, normally used to propel particle beams in accelerators, could be the solution. These cavities need to be constructed very precisely and operate at very low temperatures to efficiently propagate the radio waves that accelerate particle beams. Researchers, for instance at Fermilab and Argonne, theorise that by placing quantum processors in these cavities, the qubits will be able to interact undisturbed for seconds rather than the current record of milliseconds, giving them enough time to perform complex calculations.

The photons are encoded using thermo-optical phase shifters that are controlled by electrical voltages. Different settings of the phase shifters control the photon’s transmission behaviours in the interferometers, enabling different qubit-state encoding and different quantum operations. To scale up the system to something truly useful, the researchers will have to figure out a way to generate many more identical, entangled photons on the chip.

There is also the engineering challenge of fitting enough phase shifters, beam splitters, and other optical components onto the chip to handle all those photons. However, silicon photonics has shown the capacity for cramming many devices into tight spaces and getting them all to work with high precision and appears to be the practical way to implement the ultimate large-scale photonic quantum processor.

Physicists at Aalto University and VTT Technical Research Centre of Finland have developed a new detector for measuring energy quanta at an unprecedented resolution. This type of detector, called a bolometer, measures the energy of incoming radiation by measuring how much it heats up the detector. Measuring the energy of qubits is at the heart of how quantum computers operate. Most quantum computers currently measure a qubit’s energy state by measuring the voltage induced by the qubit.

Bolometers are now entering the field of quantum technology and perhaps their first application could be in reading out the quantum information from qubits. Graphene has a very low heat capacity, which means that it is possible to detect very small changes in its energy quickly. It is this speed in detecting the energy differences that makes it perfect for applications in measuring qubits. Recently, researchers have produced a bolometer that can make measurements in well below a microsecond, as fast as the technology currently used to measure qubits. After these initial results, there is still a lot of optimisation that can be done to make the device even better.

For the first time, physicists at Rochester University have achieved superconductivity at room temperature—a major new milestone in the quest for superconductivity. Combining carbon, sulphur, and hydrogen to create microscopic samples of carbonaceous sulphur hydride, they found that the sample was superconducting at 15°C, although at a high pressure of 270 gigapascals. Obviously, it is still unuseable in everyday circumstances. The next step in the research will be to try to reduce the high pressure needed by tuning the chemical composition of the sample. The researchers believe a room-temperature, ambient-pressure superconductor will finally be within our grasp.

Researchers at UNSW Sydney have demonstrated the lowest noise level on record for a semiconductor quantum bit. The team’s research revealed that the presence of defects either within the silicon chip or at the interface to the surface were significant contributors to the charge noise. This was a surprise, as a lot of time was spent on optimising the quality of the silicon chip, but this showed that even a few impurities nearby can affect the noise.

By reducing the impurities in the silicon chip and positioning the atoms away from the surface and interfaces where most of the noise originates, the team was able to produce the record-breaking result. Results continue to show that silicon is a terrific material to host qubits. With the ability to engineer every aspect of the qubit environment, engineers are systematically proving that atom qubits in silicon are reproducible, fast, and stable. The next challenge is to move to isotopically pure crystalline Si-28 to capitalise on the long coherence times already demonstrated in this system.

Putting it all together

In principle, there are lots of ways to construct qubits. Collaboration between academia and industry is going to play a major role in how this shapes out. Depending on each of their strengths, academic labs can focus on supplying the core expertise necessary to get a quantum computer going while the industry can provide the engineering muscle to build such an intricate machine. Both are important parts.

To prepare for these developments, chip designers, chip-fabrication-process engineers, cryogenic-control specialists, experts in mass data handling, quantum-algorithm developers, and others will need to work together closely. By combining the efforts of academic institutions, research institutes, and commercial companies, we can succeed in building practical quantum computers, unleashing immense computing power for the future.

Quite a few world players have now come out with their models and have offered them for use by the interested parties. India has recently announced eighty billion rupees to the Department of Science and Technology (DST) with the aim of building the country’s own 50-qubit quantum computer in the next four to five years.

To start off such a stupendous task and successfully complete the project, establishment of an entirely independent autonomous National Quantum Computing Academy (NQCA) under DST, with active industry participation for building our own quantum commuter, is a prerequisite urgently needed today. NQCA will also guide and oversee all related activities including establishing hands-on learning workshops, school and collegiate education, and finally at post-graduate and doctoral level.

D. Raghu Ram has previously worked with Defence Research and Development Organisation (DRDO) as a scientist. He has been awarded medal and citation by former Prime Minister Indira Gandhi for his contribution as Chief Design Engineer of Arjun main battle tank, which has been accepted by Defence Forces and has gone into production since then.