QR codes have been around for a few years. With the QR reader app in your smartphone, you might start getting QR codes in your fortune cookies soon -- Niraj Sahay & Ashish Mishra

Quick response (QR) codes are among the latest in the stable of marketing tools. These have been devised to effectively bridge the gap between offline and online marketing. QR code was created by Toyota’s subsidiary Denso Wave in 1994 to track vehicles during the manufacturing process and was initially confined to the automotive industry. With the evolution of smartphones, users got a mobile QR code reader in their pocket, which they could use to scan and read QR codes easily.

What is it?
QR Code, a registered trademark of Denso Wave Inc., is an enhancement over the conventional bar codes placed on objects such as product packaging or containers.

Bar codes store a smaller amount of information than QR codes because these store information only in the horizontal direction. A barcode scanner reads only the width and space between vertical lines and the vertical space (second dimension) is wasted.

In QR codes (2D codes), information is stored in both vertical and horizontal directions. So these can store the same amount of data as a bar code in only a tenth of the space. A QR code may contain a huge amount of complicated numeric, alphanumeric or binary data. Storing up to 4296 characters, QR codes are internationally standardised under ISO 18004.

The technology of dots
The smallest square dot or pixel element of a QR code is called a module. As with bar codes, it is recommended to have an empty area around the graphic, which makes it easier for devices to read the QR code. This quiet area is ideally four modules wide.

The minimum dimensions of a QR code depend upon the resolving power of the cameras that are used to scan the code. According to a Kaywa whitepaper, it is recommended to use a minimum size of 32×32 mm2 (1.25×1.25 inch2), excluding quiet zone, for QR codes that contain a URL. This guarantees that all camera phones can properly read the QR code. The above rule applies to perfectly printed codes that the user has direct access to.

For good reader accuracy, good contrast between the background and the dots colour is very important. The dots should be dark in colour and placed on a light background. The printing specifications of a QR code recommend a high dpi and solid colours.

How it works
A QR code system includes a QR code printer and a QR code scanner. To generate QR code, one needs a special printer and QR code creation software. Applying the right size to the QR code is important to make the code readable.

There are various factors which should be considered while determining the size of a QR code: Symbol version, data capacity, character type, error-correction level and module size based on printer performance.

Symbol version. QR codes have symbol versions from 1 to 40. Each version is differentiated by the number and configuration of modules. ‘Module’ refers to the B&W dots that constitute a QR code. Each version has a maximum data capacity that is decided by the amount of data, the type of characters (numeric, alphanumeric, etc) and the error-correction level. So the more the data stored, the bigger the size of the QR code.

Error correction is a trade-off with the amount of data that can be stored. For two QR codes of the same size, the one with the lower error-correction level will store more data than the one with a higher level.

The error-correction levels can be chosen as per the usage environment. For instance, if the QR code is to be used in a factory to track batches, more error correction (level H) is required. On the other hand, in a clean environment such as a print magazine, level L can be used. 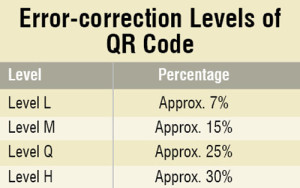 QR codes provide a convenient one-step process for directing users to a website, phone number, promotions or other information. Besides, these are environment-friendly as they make an efficient use of the printed material. Creating them costs virtually nothing when used in a number of versatile marketing and advertising instruments such as print ads, brochures, visiting cards and event displays.