According to Harvard MicroRobotics Lab, a RoboBee is a small flapping-wing robot modelled on the “bee”. Measuring about half the size of a paper clip and weighing less than a bee, this tiny robot uses “artificial muscles” to contract when voltage is applied.  Flying through wind and dust this invention can also swim. It can lift off, hover and perch to save energy.

Developed and presented in 2009, the invention of RoboBee started off with the idea of having autonomous micro-aerial vehicles(MAVs), that can have a contained and directed flight achieving coordinating behaviour in large groups. Despite its size, the structure of the RoboBee is broadly divided into three main segments, body, brain and colony. The body here refers to having robotic insects with seamlessly integrated power sources that can fly on their own. Smart sensors and control electronics that sense and respond dynamically to the environment are part of the brain development. Colony, on the other hand, focuses on the coordination of so many independent robots to act as one unit.

Designing a robot at a micro scale without rotary motors, gears, nuts and bolts is quite back-breaking. However, in 2011, laser-cut materials were layered and sandwiched together into a thin and flat plate, which popped open like children’s pop-up books. This is known as pop-up microelectromechanical (MEMs) technology.

The control system has to react in real-time and command rotational motions with each wing because of the changes in airflow which may have an outsized effect on flight dynamics. This dramatic impact of flight even in cases of small air turbulence was thankfully overcomed by piezo-electric actuators. Termed as “artificial muscles”, wings expanded and contracted when an electric field was applied. For rotational motion, thin plastic hinges function as joints. The centre of mass of the robots is where the wings are. With this design rapid prototypes were built for testing. 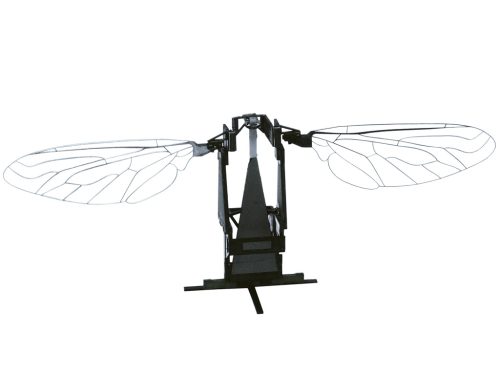 By 2013, there were two major problems in the design. The first was the robot’s incapability to make decisions, since even the smallest encapsulated microchips could not be used. Even though required sensors were in place, data transmission to a certain “brain system” for interpretation was needed.

The second was having a power supply on board. A power supplying fastener had to be connected to the robot even for direction. Hence, it was deduced that on-board power management was needed.

It is tricky to manage power as the size of the robot gets smaller. In reality, there isn’t quite a good solution for an insect sized robot to not depend on tethers for power. The on-board power allowed the robot’s stand to be high while conserving energy. With a lot of progress in the field, the goal here is to achieve longer flights.

Researchers from University of Washington, Seattle presented RoboFly (a design based on RoboBee flapping wing microbot), which is a laser powered flying robot. It is the size of a bumblebee weighing 190 milligrams. It performed the first untethered flight of a robot, fighting all odds from low range, low efficiency, and less delivery of power. Since a lot of power needs to be transmitted for a relatively long distance for this invention, lasers were used as seen in figure 2. 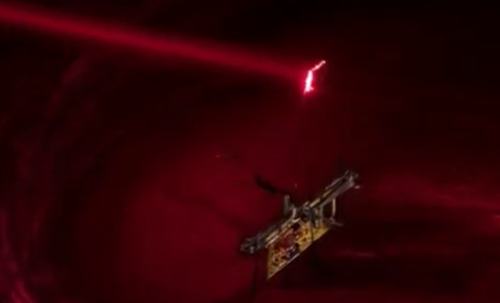 An infrared laser is powered at the photovoltaic cell, resulting in a harvest of 250 milliwatts to get the robot airborne. It can be termed as a sustained technique rather than just a liftoff. The disadvantage here is that if the solar cell moves out of the beam, power is lost and the robot stops flying, hence a ceiling mounted laser helps track these RoboBees and guides them.

Overcoming the challenges of RoboFly, RoboBee X-Wing is around 5centimetres long, weighing about 259 milligrams. This invention uses four wings instead of two since yaw control is a little bit tricky when two wings are used. However with four wings there exists more power for lifting of stuff and helps in having a completely self-contained robot. A four-winged robot, known as RoboBee X-Wing as shown in figure 3, is capable of untethered flight, due to solar cells and light source. 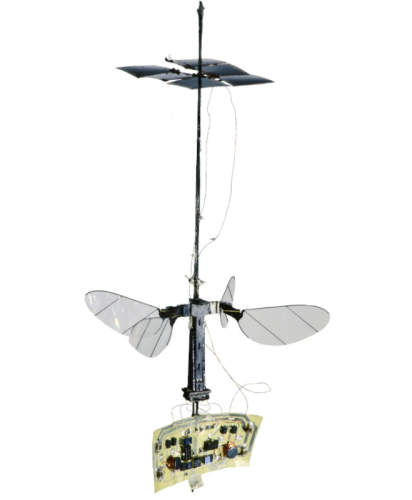 Due to its size, having a battery to power wings is difficult hence off-board power is necessary. The presence of solar cells on the top and the electronics below generate voltage (up to 200V), that drives the actuators causing wings to flap at 200Hz. Even if it isn’t stable, autonomous control for short open loop flights lasts less than a second.

Though X-Wing is not practical for outdoor applications, researchers are working on a comparable 25 per cent larger version to reduce the amount of solar energy it needs to power. Optimisation and additional integration work is needed for this RoboBee to fly truly autonomously.

Without the usage of any gears or rotating parts, Liquid-amplified Zipping Actuator (LAZA) is a direct drive artificial muscle system that achieves wing motion. Providing more power, electromechanical zipping simplifies the flapping mechanism resulting in an output of more than 1 million cycles.

Researchers from University of Bristol showed how more power is achieved when LAZA-powered flapping wings are used. This enables the robot to fly at 18 body lengths per second across a room.

The mechanism here is the application of electrostatic forces on the wing resulting in a better performance simpler design and unlocking a new class of low-cost lightweight flapping robots. This can not only help in plant pollination but can also help in finding people in collapsed buildings.

Even though power plays a significant role, having the right electronics to turn power into flight is necessary. Piezoelectric actuators made from ceramic strips are used in place of electromagnetic motors (generally used for large applications). In real time, wings can be controlled separately.

Wings requiring about 250 volts to maximise power density are driven by piezoelectric actuators. The photovoltaic cell (in the laser powered RoboBee) outputs 7V and hence needed a boost converter to drive and a microcontroller to control the wings.

What is Liquid-amplified Zipping Actuator (LAZA)

Avoiding undesired dynamic effects in motion of wings, LAZA can be adopted as a fundamental block for a range of autonomous flying RoboBees.

Enabling future miniaturisation of flapping robots this is a combination for both flapping and transmission MAVs. In LAZA the application of high voltage induces time varying electrostatic forces directly at the wing root, resulting in wing movement as seen in figure 5. It can also control the frequency of flapping and amplitude. Even with 1 million actuation cycles, a peak of 200 Watts power can be delivered making itself an equal to all the powering methods seen above. Bridging the gap between transmission and flapping micro-air vehicles, this is a high-performance electrostatic flapping actuation system.

Future use and concerns

The ultimate goal is to have a colony of robotic bees that mimic the behaviour of real bees. This swarm of RoboBees can not only be used as artificial pollinators but also in distributed environmental monitoring and search-and-rescue operations. Covert surveillance and harmful chemicals can also be detected. Programming languages are being developed to make the best use of the “swarm intelligence”, however these raise a lot of concerns.

Finances. Natural bees are unable to meet agriculture pollination. If we run out of these natural resources not every farmer can afford RoboBee. Manufacturing costs for each of them is also quite high.

Manufacturing. It is environmentally damaging because of the elements used like plastics, membranes, wires, foils, resins, carbon fiber. Added to it, chemicals used in battery cells and fine metalwork can also cause damage.

Consumption. Birds and reptiles unaware of the invention can consume this device considering its size resulting in harmful components being digested.

Decomposition. If devices are damaged and not retrieved, it may lead to the environment being polluted. Leaching of battery contents and other chemicals into oceans and forests add to the damage they can cause. Not forgetting they are not biodegradable or recyclable.

Government rules. Using these may pose a military conflict and hence boundaries need to be set up.

As much as RoboBees are a boon they are also a bane, yet as researchers progress in their findings, these devices are available to be licensed.

The author Sharon Abhignya Katta is passionate about innovation especially in the field of telecommunications.