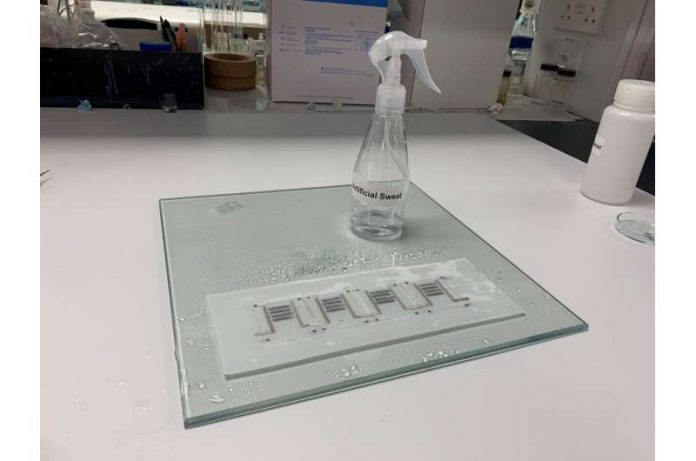 Researchers from Nanyang Technological University have developed a soft and stretchable battery that is powered by human sweat. It measures 2 cm by 2 cm and is flat as a bandage. The battery is affixed to a flexible and sweat absorbent textile that is stretchable and attachable to wearable devices, like watches, wristbands or arm straps.

The prototype developed by the researchers consists of printed silver flake electrodes that generate electricity in the presence of sweat. To demonstrate the capability of the battery, team used artificial sweat to test. They reported that an individual wearing the battery around their wrist and cycling on a stationary bicycle for 30 minutes can generate a voltage of 4.2 V and output power of 3.9 mW, which is sufficient to power a commercial temperature sensor device and send the data continuously to a smartphone via Bluetooth.

The battery is sustainable, and does not contain any heavy metals or other toxic chemicals like conventional batteries.

Materials scientist Professor Lee Pooi See, and Dean of NTU Graduate College, who led the study, said: “Our technology heralds a previously unreachable milestone in the design of wearable devices. By capitalizing on a ubiquitous product, perspiration, we could be looking at a more environmentally friendly way of powering wearable devices that does not rely on conventional batteries. It is a near-guaranteed source of energy produced by our bodies. We expect the battery to be capable of powering all sorts of wearable devices.”

Dr. Lyu Jian, a Research Fellow from NTU’s School of Materials Science and Engineering, who is the co-first author of the study, said: “Conventional batteries are cheaper and more common than ever, but they are often built using unsustainable materials which are harmful to the environment. They are also potentially harmful in wearable devices, where a broken battery could spill toxic fluids onto human skin. Our device could provide a real opportunity to do away with those toxic materials entirely.”

Associate Professor Irene Goldthorpe from the Department of Electrical and Computer Engineering department of the University of Waterloo, Canada, who is not involved in the research, said: “It is well known that electronics do not like moisture and thus wearable devices are typically fully encapsulated to shield them from sweat. This work turns sweat from a hindrance into an asset, showing that it can improve the conductivity of printed interconnects and even using sweat as an electrolyte in a wearable, bendable battery. This may open a new paradigm in the design of wearable electronics.”

The work is described in the journal Science Advances.