Let us learn how research and development (R&D) in flexible transistors could revolutionise the medical and consumer electronics industry, and have a look at some of the interesting applications being prototyped. -- By Anagha P

The wearable electronics industry will soon be booming, according to many technology analysts. But the rigidity of the circuitry that goes inside the gadget has always been a limiting factor for developing devices that can be worn longer without discomfort.

Traditional TFT
Conventional thin-film transistors (TFTs) are rigid components made from inorganic materials such silicon and silicon-based compounds. But, the rigid nature of transistors has been hindering the development of wearables as it does not offer flexibility, consumes high power and causes general discomfort. The manufacturing is also costly because it requires a clean environment, high temperature, and complex, expensive steps of processing.

How organic TFT helps
An organic thin-film transistor (OTFT) uses organic semiconductors in its channel and is preferred in display systems due to its brightness, fast response time, vivid colours and ease of reading in ambient light. These are cheaper, more flexible, cheap and low-maintenance. Moreover, their electronic, chemical, optical and structural properties can be characterised to ease their processing; this can be utilised to coat them on a variety of surfaces, including soft substrates at relatively low temperatures.

Solving carrier mobility and strain effects
Thought OTFTs are relatively cheaper, their carrier mobility (the ease with which an electron can move inside a conductor or semiconductor under the influence of an electric field) is less. This would lead to sluggish response time, affecting the animation or video being displayed. It has been found out that the carrier mobility is influenced by crystallinity and the molecular arrangement in a crystal lattice. Researchers at the University of Nebraska-Lincoln, Stanford University, SLAC National Accelerator Laboratory and Oak Ridge National Laboratory have jointly come up with an off-centre spin-coating method that significantly boosts the carrier mobility of organic crystals.

Another challenge faced by scientists was to understand how the bending of the transistor would affect its performance as mechanical deformation could affect the electrical properties of the transistor, and several studies were being done in this area. A series of experiments by the University of Massachusetts, Amherst, has shown that such mechanical deformations decrease the performance of an OTFT only under certain conditions, and in other instances it either has no effect or enhances the performance of the TFT. They also propose a plate bending theory-based model to quantify the possible strains on the transistor due to deformations, and this would prove helpful for the development of better flexible devices. 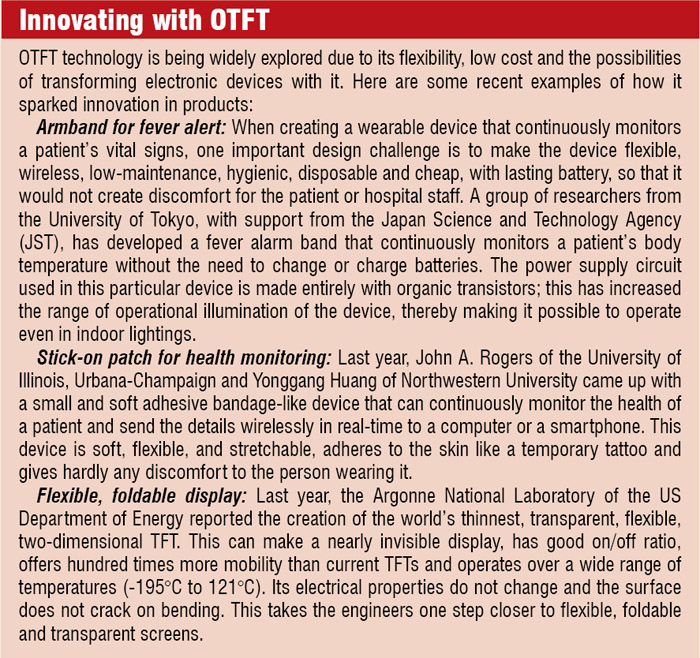 Newspaper – Hogwarts style
OTFT technology would aid diverse applications. As already mentioned, they allow the fabrication of displays on flexible surfaces, unlike traditional TFT screens. One could give an OTFT coating to a flexible plastic sheet and it can be turned into a display whose content can be animated or varied periodically. By stacking a few such sheets you could make your own Daily Prophet newspaper, just like the ones in the Harry Potter series! Or you could have the Spider Man in a comic book move around the pages and speak the dialogues. Another possibility is an electronic tattoo to monitor your vital signs, which can be stuck to or removed from your skin just like a temporary tattoo.