A Guide To Smoke Detectors And Fire Alarms

Residential fires have become a significant problem throughout the country. Fire officials estimate that at least fifty per cent of lives that are lost due to residential fires could be saved by installing early-warning fire-detection devices. The purpose of this guide is to provide information concerning smoke detectors used in conjunction with early-warning smoke- and fire-alarm systems.

Photoelectric smoke detectors. These aim a light source into a sensing chamber. Smoke produced by a fire affects the intensity of a light beam passing through air. Smoke can block or obscure the beam. It can also cause the light to scatter due to reflection off smoke particles. These detectors are designed to sense smoke by utilising these effects of smoke on light.

In a photoelectric light-obscuration smoke detector, when smoke particles partially block the light beam from the inbuilt light source, reduction in light reaching the associated photosensitive device alters its output. Change in this output is sensed by the detector’s circuitry, and when the threshold is crossed, an alarm is initiated.

Photoelectric smoke detectors are better suited to detect slow smoldering fires that are characterised by particulates in 0.4 to 10 micron range. 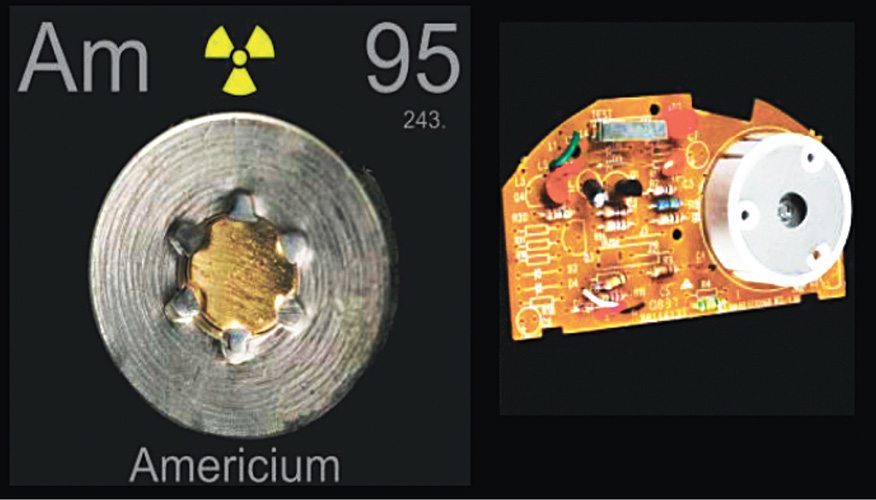 Ionisation smoke detectors. These use a small radioactive source as a key component for detection of smoke particles. The radionuclide used in these detectors is Americium-241 (Am-241), which is bonded to a metallic foil and sealed within a small chamber. You can find the radioactive button like the one shown in Fig. 4 in most ionisation smoke detectors. A trace of Americium creates charged particles that betray the smoke.

In principle, ionisation smoke detectors have a small amount of radioactive material between two electrically-charged plates, which ionises the air and causes current to flow between the plates. When smoke enters the chamber, it disrupts the flow of ions, thus reducing the flow of current and activating the alarm.

Since reduction in ionised particles results in a decrease in chamber current, that is sensed by the electronic circuitry monitoring the chamber (when current is reduced by a predetermined amount, a threshold is crossed and an alarm condition is established). A dual-ionisation chamber is required to compensate for the possible effects of humidity and pressure changes (changes in humidity and/or atmospheric pressure affect chamber current and create an effect similar to the effect of particles of combustion entering the sensing chamber).

A dual-chamber detector utilises two ionisation chambers. One is a sensing chamber, affected by particulate matter, humidity and atmospheric pressure, which is open to outside air. The other is a reference chamber, which is partially closed to outside air and is affected only by humidity and atmospheric pressure, because its tiny openings block the entry of larger particulate matter including particles of combustion.

An electronic circuitry monitors both chambers and compares their output. If humidity or atmospheric pressure changes, outputs of both chambers are affected equally and cancel each other out. When combustion particles enter the sensing chamber, its current decreases while the current of the reference chamber remains unchanged. The resulting current imbalance is detected by the built-in electronic circuitry.

Characteristics of an ionisation detector make it more suitable for detection of fast-flaming fires that are characterised by combustion particles in the 0.01 to 0.4 micron-size range.
Beware! It is illegal to disassemble an ionosation smoke detector and remove the tiny radioactive source.

Also, with the obvious potential for the spread of radioactive contamination, once the Americium source is removed from its holder, it becomes extremely difficult to arrange safe disposal.

Laser based smoke detectors are ultra-sensitive to smoke, being as much as 100 times more sensitive than standard ones.