Communities collaborate and innovate. More than the availability of cheap hardware what motivates people is actually the people around them, believes Kuber. So, more of competition, clubs and communities are driving people to build stuff using open source electronics. She says, “We have an open house every Friday at the Arduino office which is open to everyone. We teach enthusiasts on various methods to interface one technology to an Arduino. One week we have session on Bluetooth, another week we have on GSM and the next we focus on touch interface, and so on.” Kuber adds, “If people come together and learn, it boosts the engagement and the learning process.”

There is a lot of buzz among people to play with open source hardware and create something. A lot of them are attending sessions actively organised by various communities, enabling them to engage and learn efficiently. Sivaram adds, “Last time the IoTBLR group was having a demo session, there were around 150 people put up in a hall. I also administer a Facebook group called Open Source Hardware Bangalore (OSHWB). It has 700-800 members. So there is definitely a lot of interest.”

Talking about Electronics Rocks (eRocks) held in Bengaluru, Varun notes, “Last year, eRocks was pretty good as a lot of open source companies had come. May be, this year it would be awesome.” As a matter of fact, some really interesting presentations are expected this year (see box). Distributors are trying to support the community through open source development tools and boards being made available at an almost zero margin. “Kits’n’Spares would be selling the latest Raspberry Pi ‘B+’ boards at the lowest ever price in India,” says the company’s spokesperson Shyam Pandey. Codes to get discounts are being provided to design communities, for instance, through EFY’s Electronics Design Community page at facebook.com/designelectronics 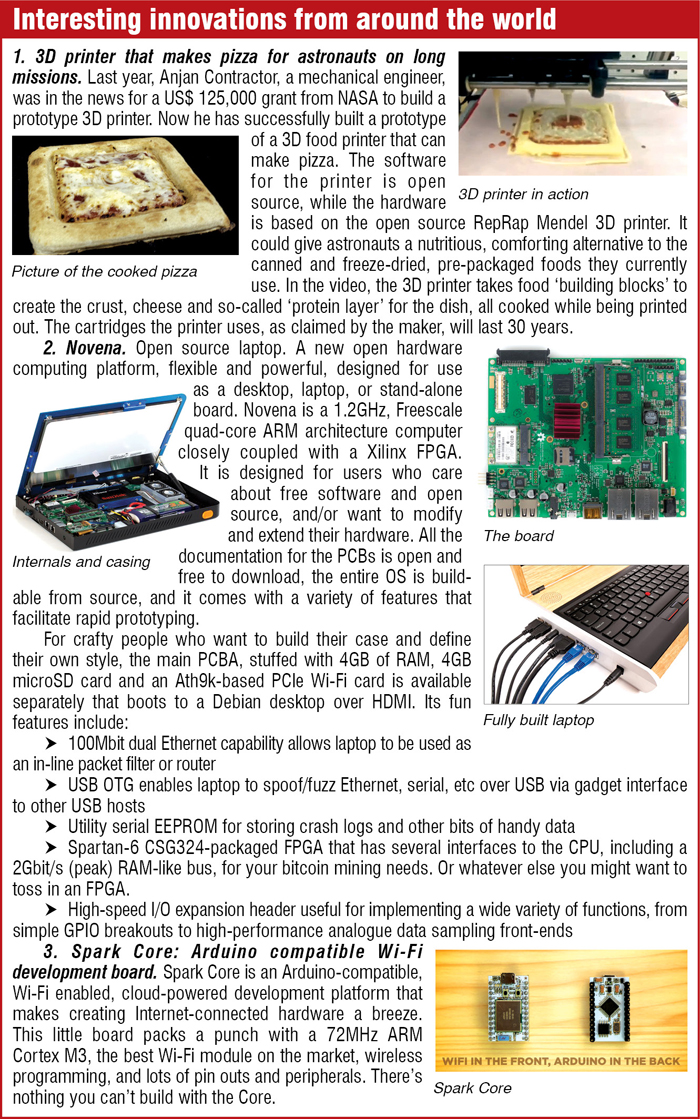 Semiconductor majors showing interest in open source. Semiconductor companies like Marvell, ATMEL, Broadcom, TI and even Intel are promoting open source to reach out to more designers who influence product management or decision making. In an article titled ‘Intel CEO on Why He is Betting Big on the Maker Movement,’ Brian Krzanich talks about open source communities and believes that there may be a ‘next big thing’ coming out of such communities. He says, “Those are the people who are inventing. Those are the creators. Those are the guys that are going to take something they see or do there and take it to Kickstarter.”

Plugcomputer (plugcomputer.org), Arduino, Raspberry Pi and Beagle series are some real examples of how semiconductor companies want to reach out to a larger designer base that can consider using their silicon as part of their designs. Moreover, the Internet of Things (IoT) has made it an even better avenue for such companies to come up with the designs along with add-on cards that enable connectivity and storage options.

Big industry stalwarts are ‘opening’ their products to ensure that, not just a group or team of engineers but an infinite audience can work on it and improve it. Earlier it was not so, informs Boris Landoni, technical director and co-founder, www.open-electronics.org. He says, “One had to hack a product to figure it out, but now they help us, give us ready pieces of code, enabling us to build better.” For instance, he adds, “After Microsoft’s Kinect was hacked, Microsoft had seen a surge in sales and has come up with a software development kit to use it. People have started working on creating projects of which Microsoft certainly had not thought of.