Global population growth, global warming, climate change and food security are among the most challenging problems around the world. Farmers need to increase their yields by about 50 per cent by 2050 to be able to feed the world, says Food and Agriculture Organization (FAO) of the United Nations (UN).

As population grows, the amount of cultivable land shrinks. To increase agricultural output from available arable land, one option is to invest in technology to meet the global demand for food. Various stages of the agricultural revolution are aimed at developing new ideas around sustainability, food production, energy and agriculture technologies.

Sensors and digital imaging technologies give farmers a better picture of their fields and crops. Data collected using these prove useful in improving crop yields and efficiency. Development of connectivity with various agricultural tools and sensor technologies lead to important progress in agricultural practice.

Agriculture has, for many years, been ignored and remained without modern technology. Now, it is making a big comeback with the use of different technologies. With connectivity gaining ground, we have GPS precision-guided tractors, sensor-based water irrigation systems, pest surveillance from air, smart livestock monitoring along with farmers hooked up to Big Data. We are witnessing agricultural innovation and adapting to a changing world and new settings including digital precision and smart farming.

Agriculture 4.0 is a new approach towards farm management and precision agriculture using technology, including sensors, smart tools, satellites, the IoT, remote sensing and proximal data gathering. It is about connectivity, smart agriculture or digital farming, in addition to the integrated internal and external networking of farm operations.

While precision farming was mainly based on the use of GPS sensors for auto-steering of tractors and harvesters, the focus of smart farming has now shifted towards smart treatments like deciding the amount of fertiliser that should be applied, or using plant protection resources for optimal crop development in a particular area in the field.

Data- and information-driven agriculture is a general trend in smart farming. Earth observation (EO) and navigation satellites use data collected from ground sensors to help farmers decide how, when and where to allocate resources for best results.

Satellites are mounted with multiple sensors. Information on current growth status and development of crops at each location in the field is obtained from the satellite(s) through various plant conditions and parameters such as biomass and chlorophyll content during growing season. Such data help farmers update crop status for specific plant protection and fertilisation measures. Farmers can also monitor various parameters on smartphones or tablets on-the-go.

A cognitive system with advanced sensor technology provides real-time feedback like temperature, humidity, light, soil pH, precipitation, irrigation timing and so on. It can help identify actual problems affecting the crops. Cloud-based services with a cognitive system learn from results all around the world in real time, so that each season brings better insights, solutions and recommendations for better yields.

To combat weeds and undesired plants that affect crops, herbicides are applied over large surface areas, covering crops and fields. Bosch and Bayer are developing smart spraying technology that uses camera sensors to distinguish between weeds and crops. This way only weeds are targeted, and crops and the environment are protected.

Plant-specific herbicide application requires sensor systems for plant recognition and differentiation. However, it is not easy to recognise small weeds in the early stages of development. With modern technology, programmable true-colour sensors can be used for real-time recognition and identification of individual weeds and crops. This can be achieved by collecting data based on the reflection properties of plants, and natural and artificial backgrounds. Crops and weeds are recognised using mathematical algorithms and decision models based on such data.

The IoT for agriculture

The IoT for agriculture, or IoT4Ag, is a new area of technology that holds tremendous potential for improving global food production. IoT sensors can be deployed on the ground or in water to collect data on target inputs, such as soil moisture and crop health. Collected data are stored on a server or cloud system wirelessly, and can be easily accessed by farmers via the Internet on tablets and cellphones.

IoT applications include farm vehicle tracking and livestock monitoring, and in arable farming, agri-food supply chain, green house monitoring and other farm operations. Farmers can remotely control activities in the farm through connectivity options like Nano Ganesh, which is a mobile-based remote controller for water pumps.

There are IoT devices from Smart Elements, wherein a variety of sensors are deployed in a farm that report back to an online dashboard. Farmers need not visit the farm, thus saving time and money by making fast and informed decisions based on real-time conditions.

Adoption of IoT solutions for agriculture is constantly growing. Cellular companies are seeking business opportunities in farm IoT applications. They are developing integrated systems that combine sensors and communication systems. IoT sensors and cloud computing will drastically improve the quality of data flow, which will, in turn, help farmers make better decisions.

As population increases, demand for milk and meat also increases. Digital and sensor technologies are being deployed in livestock management. Precision livestock farming uses advanced technologies, such as microfluidics, sound analysers, image-detection techniques, sweat and saliva sensing, serodiagnosis and others, to optimise the contribution of each animal.

With such technology, livestock such as chickens are treated as humanely as possible. Computer interfaces and virtual environments are combined to meet the needs and desires of each animal species. Enclosures are built to provide a comfortable and healthy home. The system provides livestock with the freedom to move freely in the virtual world, providing them with better treatment than they would be in the real world. Each enclosure is filled with independently filtered air to keep communicable diseases and parasites from spreading throughout the facility.

Biosensors are being used for animal health management. New wearable technologies, such as tracking collars and electronic saddles, are being used in animals, pets and livestock for their healthier upbringing. With the help of IoT-based movement sensors and microphones, farm owners can check the well-being and location of their livestock through smartphones.

Drones with such sensors as thermal, camera, lidar and multispectral are bringing major benefits to the agricultural industry. Agricultural drones with sensors allow farmers to see their fields from the sky. Information and data collected from the drones reveal such issues as irrigation problems, soil variation, and pest and fungal infestations. The difference between healthy and unhealthy plants is sometimes difficult to detect with naked eyes. Multispectral images can assist in differentiating between healthy and unhealthy plants, and enable farmers to take timely actions.

Many companies are manufacturing drones for agricultural applications. For example, advanced autopilot drone from Drotek features advanced processors and latest sensor arrays working with a real-time operating system that can deliver incredible performance. 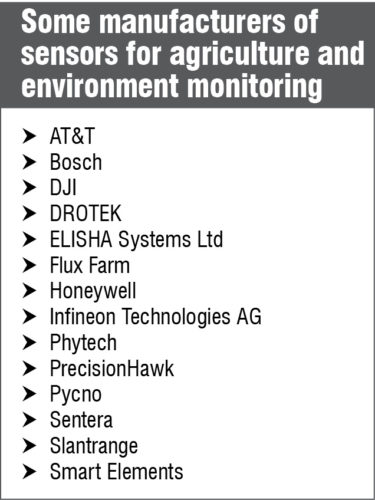 Sensors monitor a fruit’s progress in terms of perfect ripeness, adjusting light to accelerate or slow down the pace of maturation. This kind of farming requires considerable processing power. Intel’s Xeon processors are being used to power AI algorithms.

Smart algorithms are applied to agricultural technologies to enable them to learn and teach themselves. AI and smart algorithms can analyse massive amounts of data on weather, environmental and historical information to make increasingly accurate predictions on what, where, when and how to plant crops for optimal performance and yields. There is great potential of AI combined with IoT4Ag.

Flux.IoT Eddy robot built with wireless sensors and image processing technology tells farmers specifics about their hydroponics and other indoor growing systems. It can monitor variables such as pH levels, temperature and relative humidity. It can also detect contaminants and provide information on how to resolve such problems.

Pycno’s plug-and-play sensors with solar panels are fully-autonomous, having a simple dashboard. These allow seamless data collection and transfer from the farm to the smartphone.

Phytech smart sensors placed directly on plants and crops can monitor the micro-variations of stem diameters to provide stress indications.

Climate and weather are the top influencing factors in the production of crops. Sensors are getting ubiquitous and playing an important role in sensing the environment. These include sensors for monitoring water, air, weather and soil.

With an IoT-enabled weather monitoring system, farmers can determine the optimum time for plantation, irrigation and harvesting. Predictive weather models are constructed using sensors in IoT applications. Based on sensor data, farmers can plan and change harvest and irrigation times to improve the crops. By organising and analysing collected data, they can take pre-emptive actions for healthy harvest of their crops.

We are entering the era of Agriculture 4.0, which is a new phase of the agriculture revolution. We are witnessing precision, smart and digital farming using various modern technologies. Recent technology trends include sensors for connected livestock, satellites, the IoT and GPS sensors, among others, to measure a variety of essential soil and plant properties on-the-go.

Scanning from the sky using drones attached with camera sensors to monitor the fields, and also monitoring from anywhere using the Internet and IoT sensors, farmers can access various information related to real-time sensing of soil and crops.

AI with modern sensors can be used to adapt strategies to the changing conditions of the field and environment. Sensors empower farmers to react quickly and dynamically maximise crop performance, resulting in better yields and higher food productivity.