Analog, MEMS and Sensors in Wearables

Wearable are electronic devices which are small and light weight so can born by the user. They are getting adopted as watches, fashion accessory, fitness tracker, security devices or specialized medical gadgets. A wearable device may be independent in its functioning or it may act as accessory to other device such as tablet or Smartphone. In this case it is mainly used as input or output device with some computing power.

Historically, watches and wearable calculators have been very popular but with the emergence of Bluetooth low energy connectivity, low power technology and sensors wearable are available in various forms such as Smart watches, wrist band, jewelry, arm band, connected clothes etc… This article will elaborate more on wearable architecture and the innovative technologies which are transforming our lives.

As the name suggest wearable are worn by user for an extended period of time and continuously remain on and connected. So a typical wearable device should have following attributes.

Wearables are continuously on the job and monitor or output key data for the user. They may have sleep mode but never OFF.

As wearables are miniature devices and run on small battery they should consume ultra-low current. A wearable device which requires frequent charging will lose its purpose. The emergence of low power technologies has enabled the revolution in this industry.

As they are worn by user they should be small enough to take various usable and aesthetic forms. A bulky device will be extra burden on user and will lose its acceptance.

Wearable devices should be intelligent enough to filter out noise from the real data. They should be able to alert user when any important information needs to be shared. For example, a security wrist band should be able to send alert when user has met accident or need SOS help.

Connectivity is the most important factor for emergence and acceptance of wearables. These devices can be connected to smartphones or tablet using technologies such as Bluetooth, wifi etc. Besides, they can also be connected to GPS satellites to monitor user location. 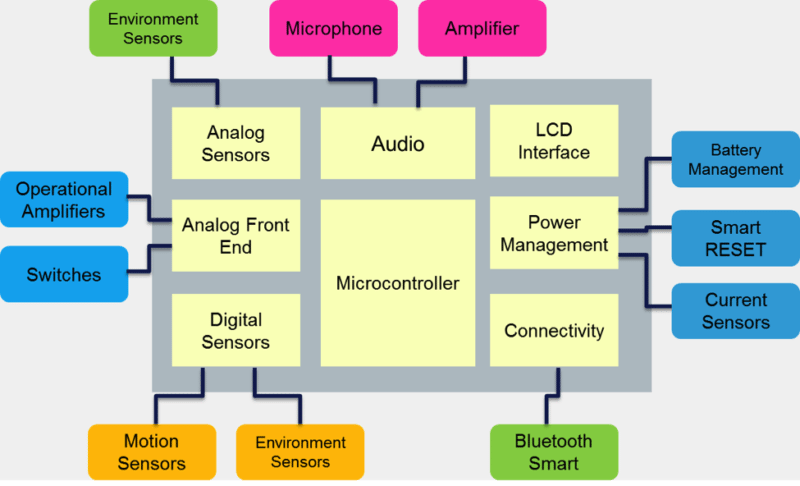 The article will address first five elements of wearables.

Sensors are driving the emergence of innovative wearable gadgets. Some of the most popular sensors are mentioned below

Magnetic Compass can detect earth’s magnetic field and can give direction sense to devices. It is widely used in indoor navigation and map navigation in mobile phone.