Sensors for the Automobile Industry

Sensors play an important role in the automobile manufacturing industry. In this article, we discuss the different sensors that are used in the modern car.

Modern cars make thousands of decisions based on the data provided by various sensors that are interfaced to the vehicles’ onboard computer systems. A car engine management system consists of a wide range of sensor devices working together, including engine sensors, relays and actuators. Many of these sensors operate in rough and harsh conditions that involve extreme temperatures, vibrations and exposure to environmental contaminants. Yet, these provide vital data parameters to the electronic control unit (ECU) that governs the various engine functions effectively.

Sensors play an important role in automotives. These enable greater degrees of vehicle automation and futuristic designs. For example, at manufacturing units, sensorised robotic arms are used for painting car bodies and measuring the thickness of the coatings being applied. Manufacturers can simply monitor the thickness of the paint being sprayed on instruments, airbag claddings and various internal parts of the vehicles using sensors.

Sensors monitor vehicle engines, fuel consumption and emissions, along with aiding and protecting drivers and passengers. These allow car manufacturers to launch cars that are safer, more fuel efficient and comfortable to drive.

All sensors inside the vehicle are connected to the ECU, which contains the hardware and software (firmware). Hardware consists of electronic components on a printed circuit board (PCB) with a microcontroller (MCU) chip as the main component. The MCU processes the inputs obtained from various sensors in real time.

All mechanical and pneumatic controls have been replaced by electronic/electrical systems that are more flexible, easier to handle, lighter and cheaper. Moreover, the ECU has reduced the number of wires and emissions, and enabled diagnosing problems with ease. Controlling and monitoring in the modern vehicle is much easier with the ECU.

The ECU simplifies the communication between various components and devices, because long wires for each function are not required. It is installed in the vehicle and connected to the nearest vehicle bus, including controller area network (CAN), local interconnect network (LIN), FlexRay and BroadR-Reach, among others. A CAN bus standard is designed to allow MCUs, sensors and other devices to communicate with each other without a host computer.

ECU collects signals from various sensors, including faulty ones, and stores these in its memory. Sensors diagnose these faults either by reading ECU memory directly or engine diagnostic equipment supplied by the vehicle manufacturer.

Modern luxury cars contain hundreds of ECUs, but cheaper and smaller cars only a handful. The number of ECUs goes up with ever-increasing features.

Depending on the vehicle make and model, the ECU(s) can be found beneath the wiper, under the bonnet in engine bay, passenger front footwell under the carpet or near the glove compartment.

As a car owner, you do not have to know the functions of all sensors used in the vehicle, but knowing the basics can be helpful in case your car breaks down or something else goes wrong. Getting a replacement sensor demands attention to genuineness, quality and performance of the product. To understand these functions, a list of some popular sensors used in modern vehicles are listed in the table. 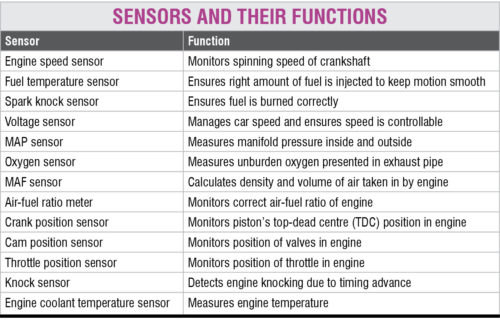 With technological advancements, a car can now drive itself. Navigating a car from origin to destination is possible with autonomous vehicle technology (that is, without human driver), including avoiding road hazards and responding to traffic conditions. Modern sensors and technology can even help a driverless car to drive at high speeds on open road.

Autonomous cars use many sensors including radars and cameras. Lidar is the primary sensor used in most driverless cars. It helps in sensing the world around and bouncing laser light off nearby objects to create 3D maps of the surroundings. Lidar does not detect objects; it profiles these by illuminating these and analysing the path of reflected light. It uses emitted light and yields high-resolution images. It is not affected much by the intensity of light at any time (day or night) and, hence, the result is extremely accurate.

Autonomous vehicles have been around for almost a decade, but lidar is relatively new and expensive. Making it work on practical autonomous cars is not easy. The cars must be robust and reliable. These should possess some form of artificial intelligence (AI) to be able to take care of rough paths, collisions, obstacles, potholes, traffic, etc. Although, a lot of improvement is still required, lidar has solved many problems in autonomous cars. Therefore it is an indispensable component for fully-autonomous cars.

Autonomous vehicles demand complex integration of sophisticated algorithms running on powerful processors, making critical decisions based on real-time data coming from a diverse and complex array of sensors. The vehicles need good and reliable sensors including GPS, cameras, MEMS-based gyroscopes and accelerometers. Although, the race for autonomous cars has begun, it has some limitations due to the limitations in current sensor technologies. 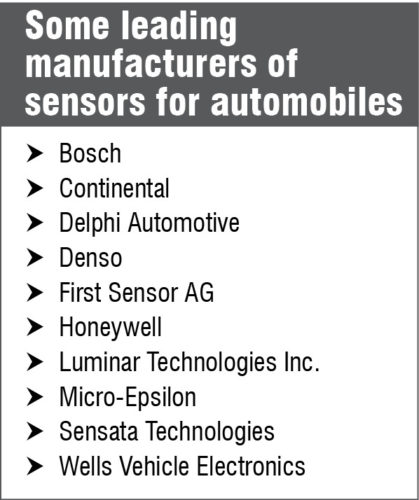 Today, electronic sensor systems and engine computers do everything, from regulating and monitoring fuel to diagnosing problems. Modern electronic sensors constantly monitor vital engine parameters like oil pressure, coolant temperature and emissions, and report back to the driver when something goes wrong.

Sensors play an important role in the automobile manufacturing industry. Hybrid vehicles require more sophistication in sensing and control. This requires a wide range of sensors, all operating properly. Such dependence on car engine sensors and electronic systems requires a high level of quality and reliability.

Large arrays of sensors are required in modern autonomous vehicles. While there has been good progress in this field, there are still many hurdles to cross. Safety and reliability are still a concern due to limitations in current sensors technologies.

Advancements in smart radar sensors such as lidar and implementation of AI algorithms could help automakers make a truly reliable autonomous vehicle in the near future.