A system-on-a-chip (SoC) integrates digital, analogue and mixed signals, as well as RF functions into a single unit. It consumes less power, which makes it ideal for smartphones.

Lower the power consumed by a chipset, higher is its efficiency. To ensure this, chipset technology has now reached 10nm scale, where key SoC manufacturers such as Qualcomm, Spreadtrum, Mediatek, Apple, Huawei and Intel are competing to outdo each other in chip performance and capture markets worldwide.

However, 10nm is not the final limit. “It is predicted that 10nm technology will be used till the end of year 2017. Year 2019 will experience a new 7nm technology, while around 2022 5nm technology would be in the market,” says Jag Bolaria, principal analyst for embedded and servers at Linley Group.

An SoC is equivalent to the motherboard of a computer system that comprises a GPU, CPU and memory on a single chip. It is a successful integration of multiple domains such as device, design and application. As far as the device is concerned, several transistors are embedded into one single chip. This allows the chip to perform a wide range of functions through a single unit (chip).

As the increasing number of transistors on the chip push its applications to a broader range, chip design is becoming complicated and challenging. The challenge could be related to the device, design or execution.

Various manufacturers use different configurations inside their SoCs depending on the type of technology used. For instance, Nvidia Tegra 3 SoC, built using 40nm technology, has only a GPU, memory controller and video out streams. On the other hand, Qualcomm Snapdragon S4, fabricated using 28nm technology, has LTE, GPE and WiFi all integrated in a single chip.

Newer chipsets fabricated on 10nm technology act as a high-end platform for highly efficient systems. At the same time, there are a few manufacturers struggling to roll over to mid-level and low-level smartphone segments with fabrication above 10nm.

The extended memory-LPDDR2 to LPDDR4-also adds value to the product (smartphone). ARM’s big.Little architecture helps smartphone chipsets with battery-saving and powerful cores such as HiSilicon Kirin 960/950/920 and Samsung Exynos 8895.

For instance, when a smartphone user plays a game that requires a high clock speed, processing speed and memory, cores in the processor are divided into big and little cores. Now, load is assigned to each of the cores simultaneously, avoiding situations where the smartphone hangs or its battery dies. 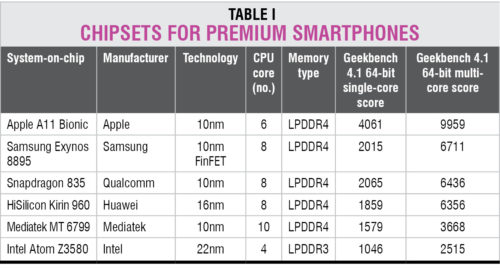 Chipsets listed in Table I are fabricated on 10nm scale and use advanced memory type (LPDDR4) and features that make them ideal for high-end smartphone devices. 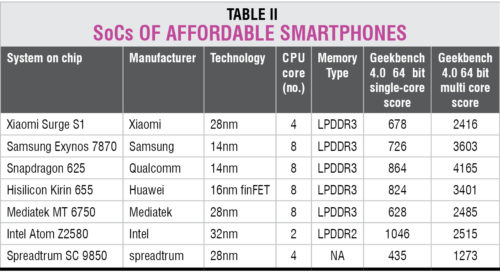 SoC classification as per specifications helps users to understand the SoCs’ significance and parameters. Moreover, smartphone manufacturers can compare the performance of the latest and running SoC models and decide to invest accordingly. 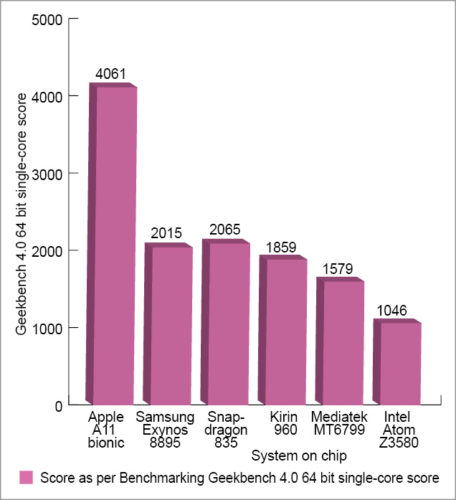 Other than FinFET, new technology upgrades include Vulkan API and VoLTE technology. Some manufacturers have also started integrating artificial intelligence (AI) features into their chipsets. Kirin 970 chipset is an example. 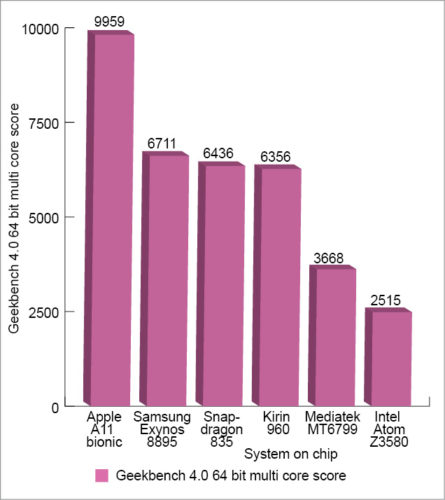 Steve Roddy, senior group director with Cadence Design System, shares that smartphones are going to cover a lot more dimensions than just taking selfies. Now, SoC applications can vary from the Internet of Things (IoT) to drones and security cameras. 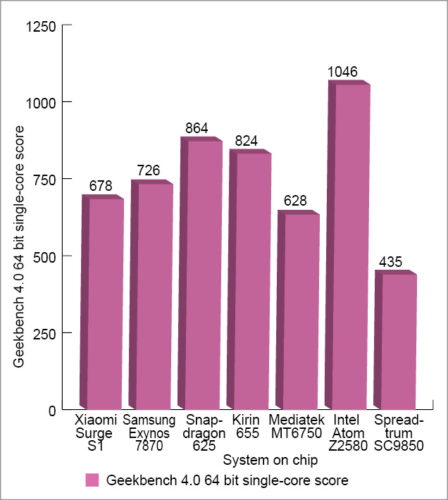 Gated bus is a low-power-consumption technology used in SoCs. FinFET technology is being used by most SoC manufacturers. Qualcomm’s Snapdragon 835 uses 10nm technology with FinFET process node. More the fabrication nodes are shrinked, faster the system-on-chip operates and lesser is the power required. The amount of voltage is also lowered due to thinner fabrication node, which has helped in reducing leakage in the chip due to planar processes by up to 50 per cent.