Designing Modular Smartphones: How Possible is it?

Making smartphones modular is a promising idea, but designing such hardware brings many challenges with it. This article focuses on design considerations and associated challenges in designing a modular smartphone -- Pankaj V.

Smartphone, one of the most empowering innovations in the modern world, has become an intimate object in our lives. However, the pace with which technology is advancing is shortening its life span. What if we could have a long-lasting modular mobile device that was always at par with the latest technology?

Modularity in a smartphone would mean interchangeable parts, which would provide us the benefits of customising our smartphone exactly the way we want, but upgrading any specific part without changing the whole device. For example, one could choose the desired processor or have multiple camera lens options for the phone. Even if some component failed with use, the user could simply replace the component without having to change the whole device.

The idea seems promising enough to some big players who have already started working on their prototypes. This concept can be easily related to the fact that smartphones are the personal computers (PCs) of future, and the concept of building a modular PC is well established with almost every part replaceable and changeable in any PC. However, the design challenges of building a modular PC the size of a small fridge is different from that of building a modular device which is small, thin, light and depends on a very small power source.

How can we build such a thing?
There are a lot of design challenges and considerations that have to be considered before developing a functional modular smartphone that can withstand the test of time. Let us look at some of the most important elements here.

Open hardware platform. A modular smartphone is an alluring idea but an open platform is a must for a successful design. A modular design with proprietary interfaces and limited availability of modules won’t do any good for the success of the idea over the long term, since the ecosystem surrounding the hardware would fail to grow without an open hardware platform to foster it. An open hardware platform would allow anybody to create own modules, ensuring the creation of a vibrant third-party developer ecosystem, lowering the entry barriers and increasing the pace of innovation by substantially compressing the development time-lines for these modular smartphones.

Standardised base module. No doubt the smartphones are incredibly compact devices, and different components are fitted into a compact body, but the modular concept of replaceable parts forces us to think differently. The design calls for a standardised base module on which self-contained units of different modules can be connected/disconnected.

A standardised base module would ensure some control over the platform and also make sure there is enough cohesion in the developer community. The whole customisation will revolve around this base module.

A standardised base module will make sure everything fits together and works. This base module should constitute different slots to connect or disconnect the replaceable modular components. It could also have a small reserve battery, which is necessary to swap the other modules, especially the external battery module.

According to some experts, it would be a good choice to have very little functionality other than just transferring data packets within different modules on the base module. This would keep the basic cost down and ensure enough space for enhancing modular functionality. 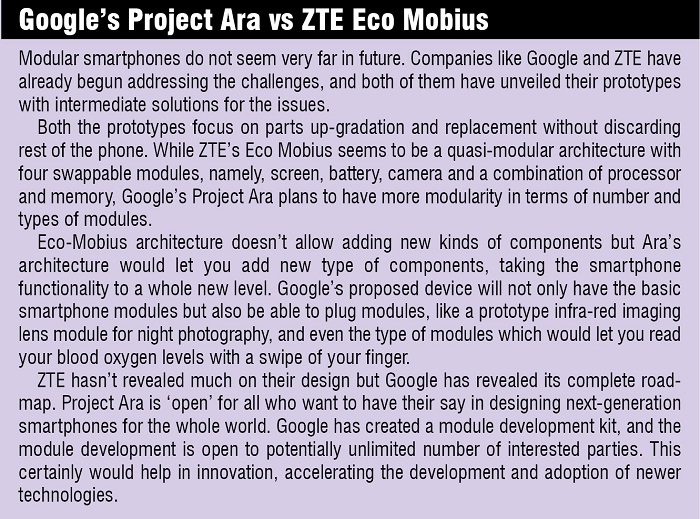 The open hardware platform comes with a side effect as well. The device could crash or stop functioning on connecting a sub-standard module designed by some other manufacturer. So, an important consideration while designing the base module would be to include enough safeguards for thermal and power management built on to it. This would secure the device from any functional hazard, if any bad or sub-standard module is connected, thus ensuring normal functioning of the device after the removal of such module.