Digital Radio Mondiale and How to Receive it

Digital Radio Mondiale (DRM) is a new technology in high-quality audio transmission. It is considered superior to AM and FM transmissions, as it delivers near-FM quality audio using digital audio encoding. DRM technology uses digital signals to transmit in long-wave (190kHz – 250kHz), medium-wave (550kHz – 1600kHz) and short-wave frequencies (below 30MHz). The signals provide data content such as broadcast schedules, news, weather and traffic information, among others, which could be displayed on a DRM receiver.

Apart from high-quality audio, DRM transmitters require less power compared to analogue ones. The same transmitter can be used to transmit both analogue and DRM transmissions, simultaneously. These factors make DRM a futuristic technology, to be adopted by several international broadcasters including All India Radio (AIR).

Having successfully completed DRM transmissions in short wave, AIR started testing these in medium wave covering 33 major cities across India. The list of the cities where DRM transmissions are currently going on can be found on AIR’s website.

We need a DRM receiver to receive DRM transmissions. Although, several manufacturers are selling DRM receivers, none has started production on a large scale. DRM transmissions across the world are mostly in the testing stage, and awareness about DRM among people is abysmally low.

Currently, a DRM receiver is available in the range of ` 15,000 to ` 20,000. Prices would fall if more manufacturers enter the field, after AIR starts its regular transmission across the country, from its current stage of testing. Figs 1, 2 and 3 show some DRM receivers.
Software-defined radios (SDRs) are available at cheaper prices online, which can be used to receive DRM transmissions. Some commercial wide-band SDRs are RTL-SDR V3 (cheapest), FUNcube Pro+, Airspy, SDRPlay, HackRF and BladeRF.

SDRs are used for radio communication based on software-defined wireless communication protocol. Instead of components (such as radio frequency amplifiers and mixers), these use software on embedded or computer systems.

An SDR can be simply plugged into the USB port of a laptop or desktop computer. An external antenna is connected to the SDR. Length of the antenna depends on the distance between the computer and transmitting station.

Another aspect of DRM reception is suitable software. Some free and downloadable software to receive DRM transmissions are HDSDR, SDSharp and Dream.

Configuring the SDR with suitable software for DRM reception can be tricky. Most manufacturers provide a quick start guide to help set up. For receiving a particular modulation (like AM, FM, DRM, SSB, USB or CW), a compatible program is run on the computer to control the receiver.

In SDR, some or all physical layers are software defined. The software determines the specifications of the radio. Any changes in the software changes the functions and performance of the radio. Selection of functions like modulation, demodulation, filtering and frequency can be done through software. Wireless system protocols are different for each country. However, SDR can be used anywhere in the world.

The authors received DRM transmissions from AIR – Chennai radio station at 720kHz every day from 15:30 to 16:30 (except Sunday), and at 729kHz and 783kHz as per regular schedule throughout the day.

DRM transmissions received by the authors in Chennai.

Ragam and FM Gold channels are transmitted in 720kHz, while Vividh Bharti and Rainbow channels in 783kHz. At 729kHz, simulcast single channel (Ragam) is transmitted. 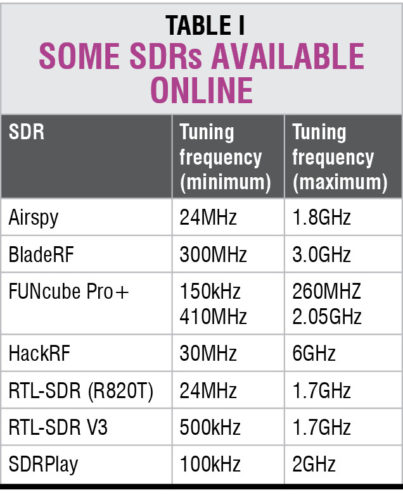 The complete list of DRM transmissions in medium wave across India, taken from AIR website, is given in Table II.

Note. Current test transmission of AIR in medium wave is scheduled up to October 27, 2018.

Dr S. Ananthi is PhD from Instrumentation Centre of Madras University, where she is presently working as professor and head in-charge. She is member of IETE, IEEE and IE(I), and was awarded Environmental Tamil Nadu national award in 2004

Dr N. Mohan worked as faculty in department of botany, University of Madras