Why E-Waste Cannot Be Taken Lightly

Electronic waste (e-waste) or waste electrical and electronic equipment (WEEE) is a term used to cover all electrical or electronic equipment and their parts that have been discarded by their users as waste without the intent of re-use. E-waste includes a wide range of products; almost any household or business item with circuitry or electrical components with power or battery supply can form e-waste.

A gold mine
In addition, e-waste contains many valuable materials such as copper, iron, aluminium and plastics, and precious metals like gold, silver, palladium and platinum, which can be recycled. In fact, up to 60 elements from the periodic table can be found in complex electronic products, and many of these are recoverable. So from a resource prospective, e-waste is a potential urban mine that could provide a great amount of secondary resources for manufacture, refurbishment and recycling.

For instance, according to United Nations University (UNU), a worldwide leading institute in e-waste research, gold content in the estimated e-waste generated in 2014 is roughly 300 tonnes, which is approximately 11 per cent of the global gold production from mines in 2013 (2770 tonnes, according to USGS 2014). 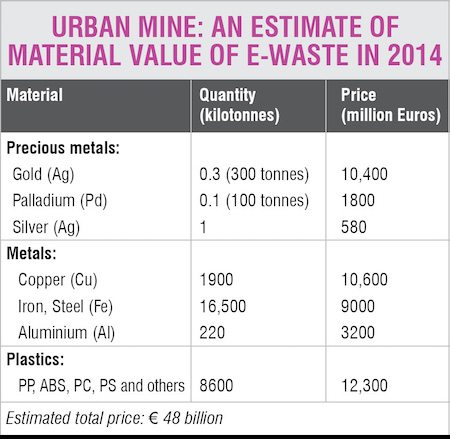 According to UNU-IAS, it is estimated that the total amount of e-waste generated globally in 2014 was 41.8 million metric tonnes (MT); India’s share being 1.7MT. The amount of e-waste has been forecast to increase to 50MT by 2018. A report by United Nations Environment Program (UNEP) mentions that the amount of e-waste being produced from goods like mobile phones, laptops and computers could go up by 500 per cent over the next decade in some countries including India.

The intrinsic material value of global e-waste generation in 2014 alone was estimated at € 48 billion. Material value is dominated by metals like gold, copper, iron, silver and palladium and plastic contents. Refer table above for a detailed estimate.

The danger
Harvesting e-waste can be dangerous if it is not recycled using state-of-the-art technology. It is not just waste, it is a cocktail of some very toxic substances such as mercury, lead, cadmium, arsenic, beryllium and brominated flame retardants. Toxic materials in electronics can cause cancer, reproductive disorders, endocrine disruptions and many other health-related problems if this waste stream is not properly managed.

Uncontrolled discarding or inappropriate waste management/recycling generates significant hazardous emissions, with a severe impact on health and environment. This is the biggest challenge, in particular, in developing and transition countries, where backyard recycling with open-sky incineration is done to recover copper from cables, cyanide leaching to release gold, acid cooking of circuit boards and the like.

The poisonous residues being dumped in drains and rivers is a common practice. Most environmental damage and health impacts related to e-waste arise from improper collection and treatment approaches. 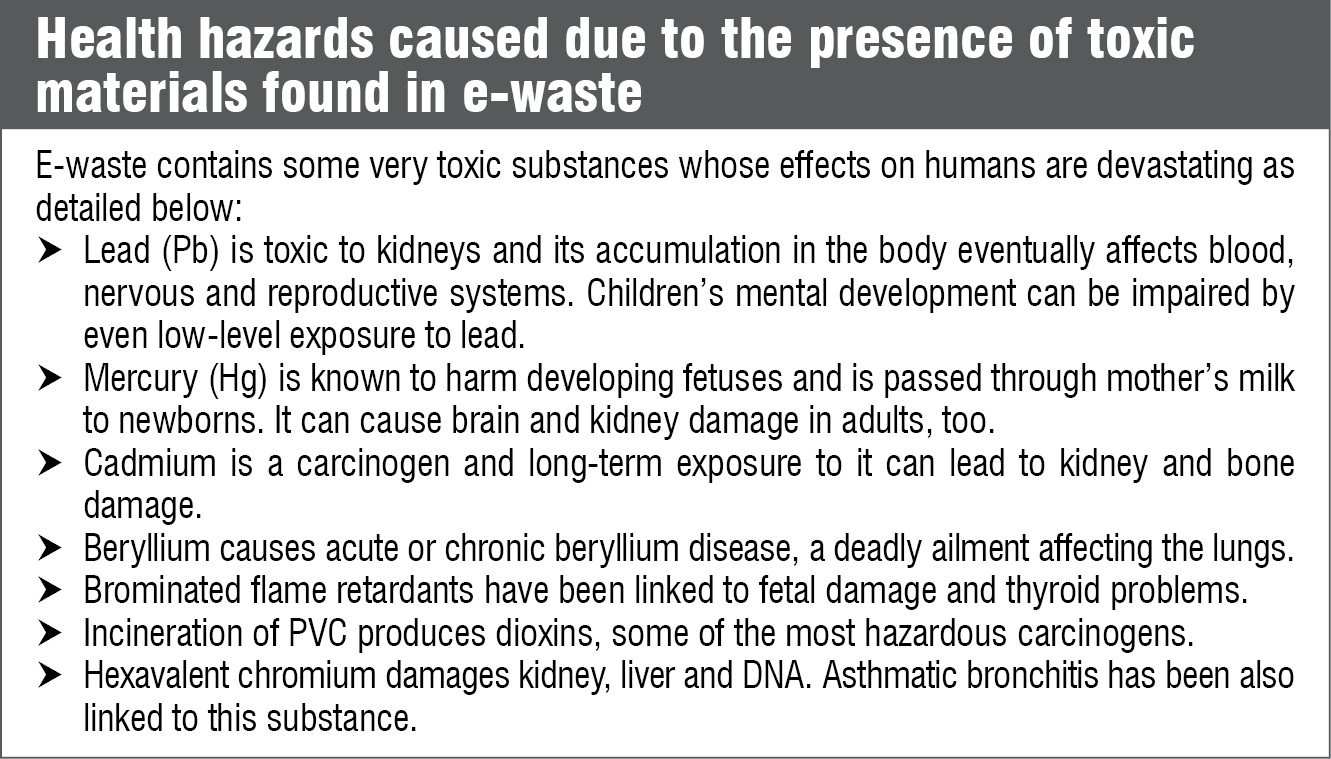 Refer box above for the various health hazards that are caused due to different toxic materials in e-waste.

Dangerous effects of improper e-waste disposal is not limited to humans; it hurts the planet and all its inhabitants including animals, birds, sea mammals and aquamarine life. Virtually every living organism is impacted by the dangerous chemical pollutants that are released into the atmosphere and underground water when e-waste is improperly disposed.
Polluted soil and air contaminates vegetables, crops, flowers, grasses, herbs, plants, saplings, shrubs and trees. Everyone and everything exposed to toxic pollutants in e-waste is at risk.

Arnab Bandyopadhyay is M.Tech (IEC) from IIT Delhi. He has 34 years of experience in different fields of electronics, including five years in e-waste management