High-Flying Solutions To Connect The World

A high-profile team is working to finalise the communication equipment payload of the drones and also figure out how FSOs can be used to make the solution more effective. Once again, Dr Borkar helps tone down our expectations: “The drones will be flying at lower levels than the satellites. Hence, the number of drones will be significantly larger than satellites to provide continuous coverage, which will likely be approximately six or seven times. This creates major issues including path control for drones, handovers and network management.”

Peak or trough, satellites will reach you
Since decades, satellites have proved their usefulness in connecting remote areas. But, due to the heavy costs involved, these have been used more for military and commercial purposes than for civilian communications. Plus, traditionally, geostationary-Earth orbit (GEO) based systems have had major latency issues because of the large distance of links, making these useless for real-time applications like voice-conferencing, video-conferencing, machine-to-machine (M2M) communications and cloud computing.

However, in recent times, companies like SpaceX, OneWeb and O3b Networks have started promising affordable, high-speed communications with satellites in low- and medium-Earth orbits (LEO and MEO, respevtively).

[stextbox id=”info”]India is the third-largest Internet user base in the world, comprising around eight per cent of the world’s Internet users, which is less than 20 per cent of our population (Courtesy: www.internetlivestats.com/internet-users-by-country)[/stextbox]

SpaceX. This company hopes to put in place a 4000-satellite network in LEO by 2030, and if this really happens, all you would need is a handy receiver to connect from just about any spot on the Earth.

Satellites have always been costly business, and SpaceX plans to change this. One of the major cost-points is the rocket, which goes up in flames on re-entry, so it can be used only once. So the company’s scientists are now trying to develop a reusable rocket, which puts the satellite in space and returns to a barge, from where it is can be safely steered to shore and reused. They also plan to make smaller, lighter satellites, so that the overall cost will make more economic sense than laying fibre-optic cables.

OneWeb. OneWeb, backed by big names like Virgin Group, Qualcomm, Airbus Group, Coca Cola and Bharti Enterprises, has its own share of game-changing plans to launch around 650 Internet-providing LEO satellites at 800km and 950km, by 2018. Its satellites are designed with lesser components and with a lighter weight, so these can be mass manufactured and also launched easily.

Another notable aspect is their patent-pending Progressive Pitch technology, which enabled them to gain use of the priority spectrum allotted by United Nations International Telecommunications Union in 1997. In order to use the spectrum, OneWeb had to work out the challenge of not interfering with GEO satellites. Their Progressive Pitch technology helps them do this by gradually and slightly tilting their satellites as they approach the Equator to make sure they never cause, or receive, interference.

Airbus Group’s infrastructure would be used for manufacturing the satellites, while Arianespace will help in deploying these on time. Coca Cola will set up millions of access points across the Earth.

OneWeb’s architecture will provide layer-2 and layer-3 services, which any telecom company can use to extend its network. Users can connect from anywhere in the world using a small and affordable, solar- or battery-powered OneWeb device. Thanks to Bharti’s involvement, this technology promises to wave its magic wand over India, too. 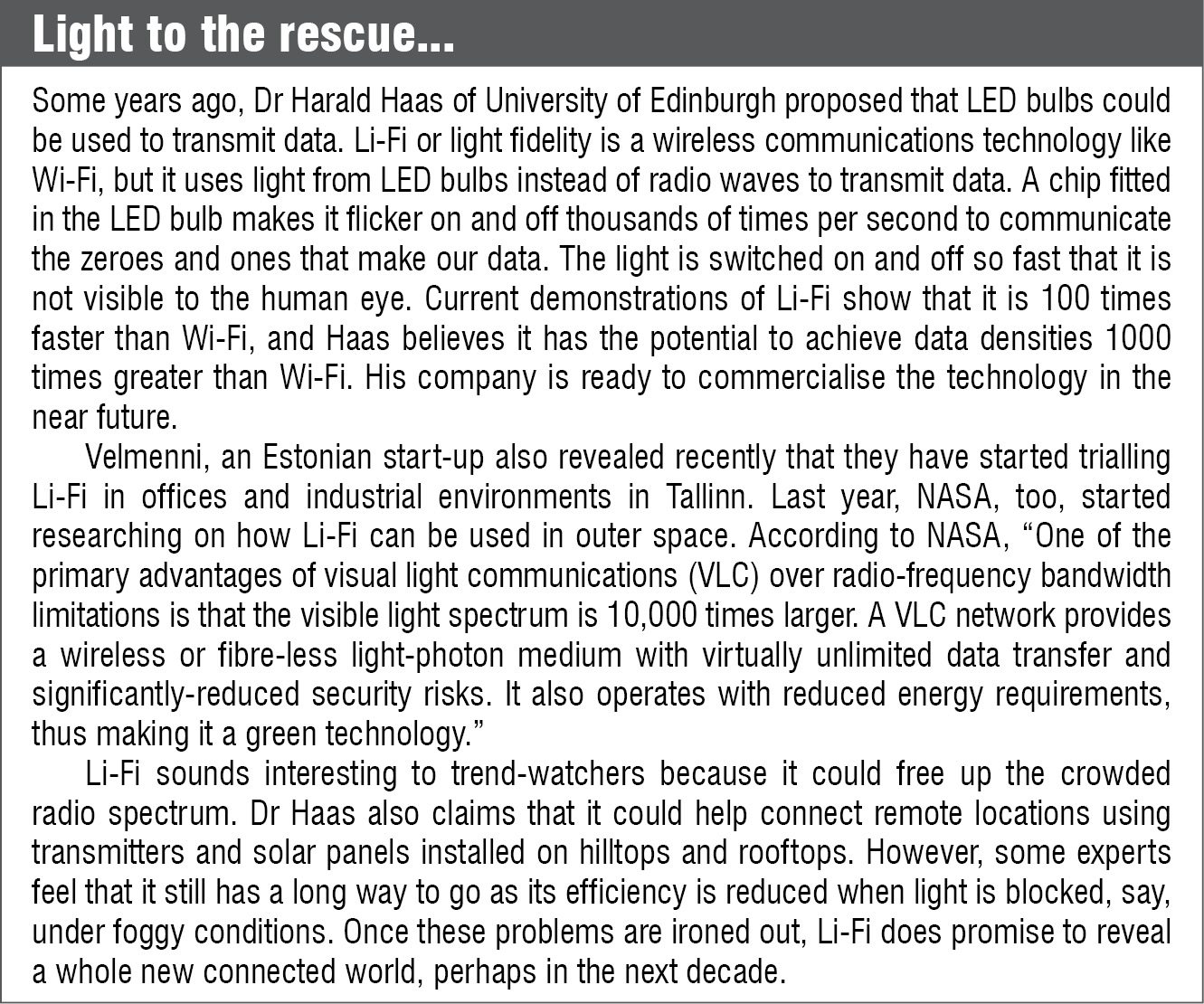 One of its divisions, O3B Maritime, has been attracting attention of late, with its interesting offering for improving connectivity on ships. Although satellites have long been used for mobile connectivity on ships, these have been problematic because there are black spots on oceans, which are not covered. Plus, when the ship changes direction, it takes some time to link up with the satellite network again, all of which tends to irritate customers with frequently-interrupted connectivity.

To avoid this, O3b’s satellite beams follow the ship on its normal route, so that the ship is always maintained within the beam centre. O3b receives latitude/longitude updates on two-hour intervals via in-band or out-of-band channels, and beam-tracking updates in real time if the ship has to change course.

Inmarsat. An early example in this space, Inmarsat serves a limited set of customers for high-bandwidth applications, using LEO satellites. It is now readying its next-generation constellation, Global Xpress, which promises to remove the black spots in ship-to-shore communications, and ensure reliable, high-speed broadband connectivity to ships.

Inmarsat is working with Rolls Royce on their autonomous, cargo-carrying drone ship project, and with Ericsson to facilitate sharing of cargo, logistics and vessel-operational data to help streamline the maritime supply chain. You could think of this as something like a maritime extension of the Internet of Things.

Mobile might continue to rule
“The telecommunications landscape is replete with limited successes of several innovative satellite based communication systems including Iridium, Teledesic and Globalstar. It may be noted that consistent with market needs and technologies available at that time, their goals were comparatively modest—providing basic voice capabilities to customers. The business model for these initiatives broke down since competing mobile systems provided lower-cost alternatives, albeit allowing selective coverage instead of universal coverage.

He explains that the large number of low-orbit satellites needed, with corresponding complexities and costs for management, make the business models of OneWeb and SpaceX somewhat questionable.