The latest sensors, including those used in IoTs and wearables, are soon going to revolutionise electronics industry. Be it a silent heart attack detector that detects the protein level of a patient or a posture-correcting chair that alerts the occupant sitting in a wrong posture—both recently invented by Indian teenagers—sensors have a vital role to play in electronic devices. The fact is that the application of sensors is ever-expanding along with the progress in science and technology.

As per industry reports, sensors are becoming the biggest and fastest growing markets, comparable with computers and communication devices markets. You find sensors in smartphones, automobiles, security systems and even everyday objects like coffee makers! Apart from consumer electronics, these are also an integral part of the Internet of Things (IoT), medical, nuclear, defence, aviation, robotics and artificial intelligence, agriculture, environment monitoring and deep-sea applications. 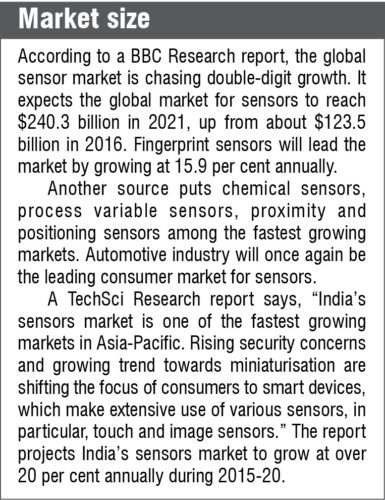 The shift to smarter sensors

Basically, a sensor is an input device that receives and responds to a signal or stimulus. Nowadays some sensors come integrated with many sensing elements and read-out circuitry in a single silicon chip, providing high accuracy and multiple functions. Manufacturers use both advanced technologies and methods for signal processing and conversion. Latest sensors have more features including user-friendliness, accessibility and flexibility. So there is a paradigm shift in the sensor industry with integration of new technologies to make sensors smarter and intelligent.

Ordinary sensors are still used in many applications. But innovation and advancement in microelectronics is taking sensor technology to a completely new level. The functionality of ordinary sensors has expanded in many ways and these now provide a number of additional properties. The Latest Sensors are becoming more and more intelligent, providing higher accuracy, flexibility and easy integration into distributed systems.

Intelligent sensors use standard bus or wireless network interfaces to communicate with one another or with microcontrollers (MCUs). The network interface makes data transmission easier while also expanding the system. Manufacturers can diagnose sensor faults and guide users to troubleshoot them remotely through the computer network.

An intelligent sensor may consist of a chain of analogue and digital blocks, each of which provides a specific function. Data processing and analogue-to-digital conversion (ADC) functionalities help improve sensor reliability and measurement accuracy. The typical structure of an intelligent sensor is shown in Fig. 1.

There are a wide variety of sensors depending on the technology (analogue/digital) and applications. This article covers some of the latest sensors including IoT sensors, pollution sensors, RFID sensors, image sensors, biometric sensors, printed sensors, and MEMS and NEMS sensors.

These latest sensors are connected to a computer network for monitoring and control purposes. Using sensors and the Internet, IoT systems have wide applications across industries with their unique flexibility in providing enhanced data collection, automation and operation.

Air pollution sensors are used to detect and monitor the presence of air pollution in the surrounding area. These can be used for both indoor and outdoor environments. Although there are various types of air pollution sensors, most of these sensors focus on five parameters: particulate matter, ozone, carbon monoxide, sulphur dioxide and nitrous oxide. These sensors are somewhat costly but are becoming more affordable for common use.

Sensors capable of detecting particulate matter with a diameter between 2.5 and 10µm (PM10) and a diameter less than 2.5µm (PM2.5) are available in the market. Fig. 2 shows a typical PM sensor popular among hobbyists and experimenters. Fig. 3 shows an easy-to-assemble PM2.5 sensor from Sharp Corporation with a detection time of ten seconds.

RFID chips (Fig. 4) as small as the size of rice grains can be inserted directly under the skin for use as ID cards. There is a trend to use RFID chips in many products including contactless banks cards and Oyster cards. There are also cases where chips are implanted in pets and cattle for monitoring.