Materials: From Graphene to Borophene Electronics

The discovery of graphene in 2004 by two researchers, Prof. Andre Geim and Prof. Kostya Novoselov at the University of Manchester (UK), created quite an excitement. This pioneering work won the duo Nobel Prize in Physics in 2010. However, there are some inherited limitations of graphene as a wonder material, forcing scientists to look for an alternative. In this quest, they have discovered a new two-dimensional (2D) material called ‘borophene’ that is thought to exhibit electronic properties better than graphene. This article dwells on the journey from graphene to borophene.

Graphene is a one-atom thin sheet of carbon atoms arranged in a hexagonal format or a flat monolayer of carbon atoms that are tightly packed into a 2D honeycomb lattice. Owing to exceptional strength, flexibility and conductance, it is expected to shape almost all aspects of future technologies.

Researchers around the world have found that graphene has promise for applications in electronics ranging from displays to random-access memory. Noted for the speed at which electrons pass through it, graphene has already proved to be a miracle electronic material with properties suitable for design of strong, fast, flexible and transparent electronic devices, printed graphene in paper electronics, and car batteries. 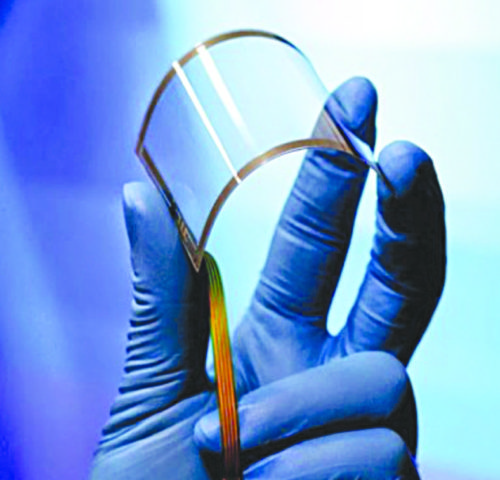 With applications touching humans in every quartet of life, graphene seems to have limitless capabilities, though with the traditional challenge of its production cost. In 2013, a graphene flake the size of one micrometre cost more than $1000. Obviously, this is why graphene is one of the most expensive materials on Earth.

However, upscaling of graphene production is one of the most researched subjects and we are not far away from attaining scalability of the graphene production process. Researchers have devised a method for producing graphene-treated silver nanowires, which could significantly reduce production costs for nanowire-based displays. This could mean that graphene offers a real alternative to indium-tin oxide in flexible low-cost touchscreen displays.

Nevertheless, some of the major limitations of graphene include:
1. High bending stiffness for devices that also need to stretch, compress or even twist.
2. Band gap not suitable to simply get the characteristics of switch on and off.
3. High susceptibility to oxidative environments when used as a catalyst
4. Some toxic qualities. Scientists have discovered that graphene features jagged edges that can easily pierce cell membranes, allowing it to enter into cells and disrupt normal functions.

Scientists are interested in two-dimensional materials mainly for their unique electronic properties. Borophene is an unusual material because it shows many metallic properties at nanoscale. Even though three-dimensional, or bulk, boron is nonmetallic and semiconducting.

Recently, researchers successfully synthesised borophene. The outcome was not only similar to graphene but also much lighter and stronger, contributing to the novel desirable properties.

Researchers showed that it has a record high flexibility, a higher stiffness-to-weight ratio and higher ideal strength than graphene and the polymers currently used. Superconductivity of borophene is critical. Borophene grown on a silver substrate takes a wavy form, which makes it suitable for flexible electronics. As a 2D metal, it helps fill a void in the family of 2D nanoelectronic materials.

With the synthesis and characterisation of borophene researchers have moved a step ahead. Properties such as low mass density, high strength and high levels of flexibility make borophene a promising candidate as a reinforced element for designing composites and for flexible nanodevices, such as flexible electrodes and contacts for nanoelectronics. 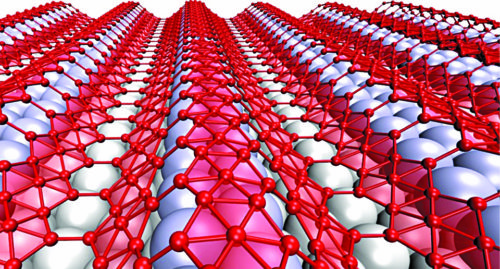 Most of the work with borophene so far has been aimed at synthesis as well as characterisation of the material’s properties. Advanced computer simulation methods showed formation of crinkles in the corrugated surface.

Borophene is a proposed allotrope of boron made up of single-atom sheets. The research reveals that one cluster consists of 36 boron atoms arranged in a two-dimensional sheet with a perfect hexagonal hole in the middle, which is of real significance. It suggests that theoretical calculations about a boron planar structure might be right.

Although bulk allotropes of carbon and boron differ greatly, in nano regime small clusters of these elements show remarkable similarities. Boron analogues of two-dimensional carbon allotropes such as graphene have been predicted. Researchers demonstrated theoretically that borophene is enriched with more interesting electronic characteristics than graphene but a strong foothold in production was missing.

Theoretical studies predict that 2D boron sheets will adopt an atomic configuration similar to that of boron atomic clusters. Recently, researchers successfully synthesised borophene using molecular beam epitaxy. They reported the formation of two-dimensional boron by depositing the elemental boron onto a silver surface under ultra-high-vacuum conditions. The graphene-like structure was buckled, weakly bonded to the substrate, and metallic.