Modernise Your Living With Solar

Today, lifestyle is changing at a very fast pace, while accepting ways to save energy. However, using grid electricity is not the solution as it is too costly. Electricity generation is done using either thermal resources like coal, gas or diesel, or through other renewable sources, which involves a lot of investment. The major chunk of electricity is generated using thermal resources, which lacks both in quality and quantity due to the scarcity of initiatives to produce large amounts of natural gas and coal in India.

Corruption and theft in Coal India has forced it to miss many targets, leading to the requirement of mining new deposits. Hydro-electric power projects have slowed down in northern regions owing to ecological and environmental conditions in public interest. Thankfully, solar energy can be looked at for our growing electricity needs. 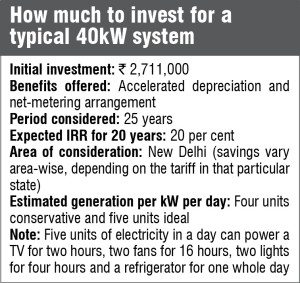 Solar energy offers multiple benefits over grid electricity, both economically and environmentally. It has increased the interest level of people in both commercial and industrial sectors. But there is a lot of confusion about the commercials of solar power. When it comes to roof-top solar installations, people are concerned about the high upfront costs involved and do not want to risk taking the first step.

Are you really aware about the investments to go solar and the commercials of it? Let us find the answers here.

Drastic reduction in costs of solar PV panels
Solar energy is generated through solar photovoltaic (PV) panels that are installed on rooftops. Major cost involved in any solar system is the cost of these solar panels. In early 1977, per watt cost of these panels was US$ 76.67 as shown in Fig. 1. Over a period of time, this price dropped considerably to US$ 0.36 in 2014.

Although the graph in Fig. 1 represents the fall in prices (popularly called Swanson Effect), prices may vary as per the make (brand) of a particular solar panel. Typical price per watt of a good Indian-make solar panel can vary from ` 32 to ` 37, whereas for a solar panel from Tata Power the price can go up to ` 45 per watt. The price is further expected to fall over the next two years.

Note. The rooftop solar systems that are being talked of here are grid-tied and grid-interactive type where solar power thus generated can be transferred to the grid.
Cost varies with size

Also, cost per watt of energy from a solar system reduces considerably with reduction in cost per watt of the inverter. Panel cost reduces only marginally with an increase in system size. What does result in a drastic reduction in costs is drop in inverter costs. If you see Fig. 2, a considerable dip is seen in price per watt if the system size goes beyond 20kW, after which the price drops only marginally.

The investment
Let us now look at a representative cash flow of a solar power system for a typical 40kW system. If the initial investment is about ` 2,711,000, the benefits that you can expect include the facility of net-metering, giving you a return of about 20 per cent annually for 20 years, depending upon the per unit cost of the energy generated and the load used. To understand this better, please see the example given in the box on first page of this article.
Fig. 4 clearly shows that the money gets recovered in only four years, beyond which electricity is free. The quantum that can be saved (cumulatively) is as high as ` 2 million.

This cash flow was calculated (Fig. 5) assuming that grid tariff will rise at a conservative five per cent per annum. Historically, it has been higher than that. Solar tariffs would either rise at two per cent per annum in PPA mode or remain the same in loan mode, in which 30 per cent cost of the system is paid upfront.

You can comfortably say that solar makes great sense at this point and can result in high savings. It is not the cost of installation that has been holding back end customers from going solar, it is the high cost of trying something for which there is lack of demonstration available.

Today, there are multiple sites in New Delhi (and elsewhere) where grid-connected solar PV systems have become a reality. National Productivity Council is one such site.