Open source hardware and software are the new versions of a phenomenon that has been with us since the first wandering bards added their own words to the melody of a well-loved folk tune. Open source tools feed the dreams of amateurs and entrepreneurs alike from a deep well of well-documented designs, which are constantly being refined by the communities that use them. A growing number of traditional businesses and corporations understand that embracing them as an integral part of their business strategy may be their best hope for surviving the disruption and disintermediation that open source technologies often bring to tightly-held markets

At first glance, the idea of freely-shared intellectual property (IP) would appear to contradict the fundamental principles of a competitive, market-driven economy. Open standards that enable interoperability between competing products are acknowledged as tools for building larger markets, but tightly-held IP and proprietary knowledge have been considered the key ingredients for innovation and success in technology-based markets from the steam age onwards.

This has begun to change over the past two or three decades, as the growing complexity of many technologies has given rise to several trends that threaten to slow the pace of innovation and market evolution. Some of these trends are:

These issues have helped drive up the cost of creating or licensing many essential IP elements to the point where these make many ventures less lucrative, or even impractical. Paradoxically, the stifling business conditions these created also served as the stimulus for the emergence and adoption of open, royalty-free technologies that are developed and are supported by the people who use them.

This emergence occurred in three distinct phases, beginning with open source software. The open hardware movement that followed somewhat later adapted many of the concepts and licensing conventions developed over a decade by software pioneers. 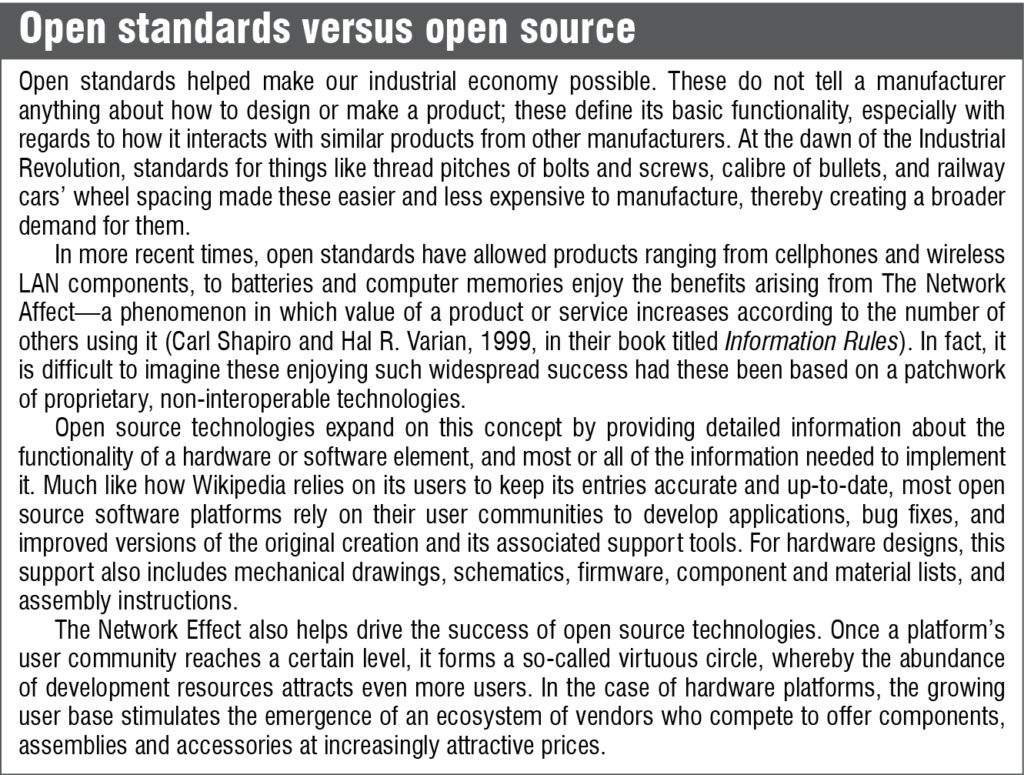 Recently, open source silicon platforms have begun to emerge as the third phase of the movement, which is re-democratising innovation and powering the global tech economy.
A tale of two innovations

Linux. One of open source software’s biggest successes is Linux operating system (OS), conceived by Linus Torvalds as a free alternative to AT&T’s powerful but costly UNIX OS. Fittingly, Linux borrows many elements from Richard Stallman’s earlier GNU project. Within a few years of its initial release in 1991, Linux had attracted a large, active community of users, many of whom began contributing to its vast and growing pool of user-created resources.

As a result, Linux developers can access countless libraries of pre-written utilities and functional blocks, created by fellow users. With many of the low-level elements of their applications already available, developers are able to focus their efforts on the proprietary functions that add value to their product and differentiate it from its competitors. Linux’s ability to shorten a product’s time-to-market while reducing development costs made it a top choice for embedded systems that run under the hood of thousands of consumer and industrial products. In addition, Linux powers the servers that run 96.5 per cent of the top one million domains in the world (as ranked by Alexa), 92 per cent of Amazon’s 350,000 EC2 Web servers and all 500 of the world’s most powerful supercomputers.

Arduino. Arduino embedded computing platform was at the vanguard of the second open source wave (hardware) when it was first conceived in 2003 as a student project at Interaction Design Institute Ivrea in Ivrea, Italy. The project’s audacious goal was to develop a very-low-cost, easy-to-program, single-board computer that would enable designers, artists and other non-engineers to build digital devices and interactive objects that can sense and control objects in the physical and digital world. In retrospect, developers significantly underestimated the project’s actual impact.

The original Arduino board was roughly the size of a business card and provided easy access to signal lines of its 8-bit microcontroller (MCU) through a series of pins along each side of the board. These pins allow a developer to easily connect the processor’s input and output lines to a real-world device, such as a light sensor or motor. These can also be used to connect drop-in daughter boards (known as shields) equipped with sensors, network interfaces or other functionalities. Programming the board is accomplished using simple, English-like commands that are written and compiled within a user-friendly integrated development environment (IDE).

Arduino’s low cost, versatility and ease-of-use led to its explosive popularity with technology hobbyists who embraced the do-it-yourself (DIY) philosophy of the so-called maker movement. Sold in millions, the tiny open source board and its variants served as the silicon intelligence that enabled hobbyists to unleash their imaginations and create things like low-cost automated telescopes, smart clothing, personal robots and automated home brewing systems.

Meanwhile, as enterprising makers began to offer innovative commercial products on Kickstarter and other crowdfunding sites, Arduino technology helped them bring their ideas to market quickly and inexpensively.

As some of the earliest open source platforms, Linux and Arduino were instrumental in upending the conventional top-down business model in which proprietary technologies were developed in isolation by large corporations and doled out to those who could afford them. In contrast, open source’s bottom-up approach enables designers to harness the collective intelligence of a user community to create tools and products that reflect real-world needs.
The overwhelming success of Linux and Arduino also demonstrated that product differentiation on a common, non-proprietary platform is not only possible but desirable.
Open source technologies perform another vital and surprising role within the tech economy by serving as a catalyst that enables the creation of other open source technologies that make new and unexpected applications possible. In much the same way that Stallman’s GNU project provided many of the concepts and enabling technologies that made Linux possible, Arduino gave makers, tinkerers and would-be entrepreneurs the low-cost, easily-hackable controller they would need to tackle projects that might have seemed unthinkably ambitious until then.

Among other things, the humble controller board provided the spark that ignited the 3D printing revolution. Although the first 3D printers were developed in the 1980s, these were still costly and relatively rare, typically found only in large corporate R&D labs. This changed in 2005 when a team at University of Bath in the UK began a project to develop a low-cost 3D printer that could print most of its own components. The team named the project RepRap, which is short for replicating rapid prototyper. The machine would melt inexpensive plastic filament and extrude it through a print head that would be moved across X, Y and Z axes using inexpensive stepper motors. Each of these motors was controlled by its own Arduino board, while other Arduinos took care of various housekeeping functions.

An early RepRap prototype printed its first useable part around a year later, paving the way for a subsequent design that could print more than half of its functional parts in February 2008. Tech enthusiasts from around the world quickly embraced RepRap project, using the open source design to build their own machines and contribute improvements that they had made. Soon, entrepreneurs were using RepRap’s genetic code as the basis for affordable commercial products, such as Thing-o-Matic, a sub-US$ 1000 3D printer kit, produced by MakerBot. Thing-o-Matic and virtually all other early machines used Arduino controllers. In addition, most low-cost units sold today use Arduino-style controllers.
Arduino also played a seminal role in the development of low-cost multi-rotor and fixed-wing drones that enjoy wild popularity with both hobbyists and commercial operators. Much of the early activity of this revolution occurred, and is documented on DIY Drones website called https://diydrones.com, an online forum for hobbyists interested in developing autonomous model aircraft.

Although, open source technologies gave developers royalty-free access to hardware and software platforms that they could modify to suit their needs, integrated circuits (ICs) their platforms run on have been almost exclusively based on proprietary IP. This began to change as devices known as field-programmable gate arrays (FPGAs) became inexpensive enough to be used as custom ICs. Designers could program the devices with desired functionality using large libraries of FPGA code (both proprietary and open source) in a matter of days or weeks, as opposed to months and millions of dollars required to develop the tooling for real ICs.

Although, FPGAs are excellent solutions for certain applications, these are slower, more power hungry and significantly more expensive than equivalent single-purpose silicon devices. Until recently, nearly all hard silicon designs were based on proprietary IP, either developed in-house or licensed from a third-party vendor.

Cost and time required to develop a reliable, high-performance processor architecture meant that nearly all ICs that require a processor core use third-party IP, licensed from a handful of vendors such as ARC, ARM, MIPS and Qualcomm. These cores offer excellent technical support, optional architectural enhancements and deep libraries of application code, but the IP tends to be very costly to license and usually has significant restrictions on how it can be modified.

As a result, the same market pressures that created open source software and hardware are giving rise to the first generation of open source silicon projects. Among the most ambitious and successful of these efforts is RISC-V project, an open instruction set architecture (ISA), originally developed at University of California at Berkeley, and currently supported by RISC-V Foundation.

Like most modern ISAs, it is based on reduced instruction set computing (RISC) principles that provide a good balance between silicon footprint, execution speed and code efficiency. The instruction set can be instantiated with a 32-, 64- or 128-bit word width, and has been designed to efficiently support a wide variety of common applications. Unlike proprietary ISAs, RISC-V ISA can be freely used for any purpose, enabling anyone to design, produce or sell RISC-V chips and software.

RISC-V Foundation’s 100+ member organisations have pooled their knowledge, know-how and resources to create a common platform and an ecosystem of development tools that form the basis of their own unique and highly-competitive products. SiFive, for example, is developing a service that allows its customers to design custom RISC-V-based system on a chip (SoC) devices and receive sample chips within a matter of weeks. SiFive also enables newcomers to become familiar with the technology by offering a low-cost, Arduino-compatible board powered by one of its RISC-V processors.

RISC-V’s customisable architecture makes it easy for developers to create devices with the precise mix of functionality, performance and energy-saving features that give their products the unique capabilities they need to dominate a particular application space. As an example, Trinamic, a German semiconductor maker focussed on motor drivers, is adopting the RISC-V as the foundation for its next generation of motor drivers and power electronics.

The amount of computational power required for motor control functions has been steadily increasing to meet faster response times, higher precision and greater overall performance required by many emerging applications. RISC-V architecture makes it easy to add cores to driver ICs that are responsible for communication and protocols, offering more complete solutions and higher levels of integration.

As RISC-V and other early open source silicon platforms emerge, their development ecosystems will get a head-start from the rich trove of resources already created by open software and hardware movements. By enabling small, agile groups of entrepreneurs to bring cutting-edge products to market quickly and in a cost-effective manner, these open source technologies will continue to democratise and accelerate innovation within the tech economy.

Lee Goldberg is a Si-Tech journalist, a self-identified recovering engineer. He is currently working as a freelance writer and a contributor to several publications.

Jonas P. Proeger has been running the marketing team at TRINAMIC Motion Control since 2012. He deeply believes in the concept of open source software and hardware. He successfully launched the open source 3D printer cape T-Bone on Indiegogo in 2013.