Where We Stand In The Race To Quantum Computing Technology

A quantum computer is a machine that performs calculations based on the laws of quantum mechanics. The excitement surrounding quantum computing is mainly due to the fact that it reduces the computational complexities of certain problems.

Quantum entanglement is a process by which microscopic objects like electrons or atoms lose their individuality to become better coordinated with each other. Entanglement is at the heart of new quantum technologies that can lead to great advances not only in computing but also in communication and sensing.

These entangled states are very fragile; even a tiny disturbance will undo the entanglement. Hence, it is important for current quantum technologies to physically isolate the microscopic systems they work with. These typically operate at temperatures close to absolute zero or -273 degrees Celsius. 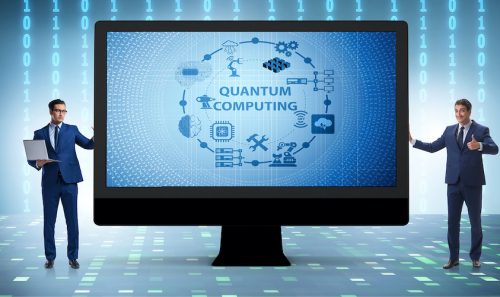 A quantum computer is a machine that performs calculations based on the laws of quantum mechanics, which is the behaviour of particles at the sub-atomic level. The excitement surrounding quantum computing is mainly due to the fact that it reduces the computational complexities of certain problems. Only very special classes of algorithms are known to enjoy quantum speedup. Based on the evaluation of publicly available information regarding progress to date in the field of quantum computing, there appears no fundamental reason why a large, fault-tolerant quantum computer could not be built in principle.

There’s a race to build a machine that can outperform a classical one. In the current industrial or commercial domain, we have no quantum machine that can outperform a classical one. The goal, however, is to build a quantum machine that can solve problems faster than classical computers. This is called quantum supremacy or quantum ascendancy.
The below-mentioned technologies are considered appropriate and relevant based on the present state of the art. These technologies are only illustrative and by no means complete. Significant technical challenges remain on the path to build such technologies, and to deploy these to practical advantage.

Currently, the most powerful quantum computers are ‘noisy intermediate-scale quantum’ (NISQ) devices that are very sensitive to errors. Error in preparation as well as measurement of qubits is difficult to quantify. For example, for 100 qubits, a one per cent measurement error means that a NISQ device will produce an incorrect answer about 63 per cent of the time.

Eric Hudson, professor of astronomy at the University of California, Los Angeles, and his colleagues recently developed a new qubit hosted in a laser-cooled, radioactive barium ion. This ‘goldilocks ion’ has nearly ideal properties for realising ultra-low error rate quantum devices. It helped the UCLA group to achieve a preparation and measurement error rate of about 0.03 per cent, lower than any other quantum technology to date.

Two-dimensional codes that currently exist require distillation, more precisely known as magic-state distillation. This is where the quantum processor sorts through the multiple computations and extracts the useful ones. This consumes a lot of computing hardware for just suppressing the errors.

Dr Brown of Sydney University had applied the power of three-dimensional code to a two-dimensional framework. The trick was to use time as the third dimension. In this research, he and his colleagues developed a decoder that identifies and corrects more errors than ever before, achieving a world record in error correction.

Currently, regular qubits have to be kept at a temperature that is just fractions of a degree over absolute zero. In order to maintain this temperature, top of the line refrigeration technology is used. This costs millions of dollars and takes a large amount of space. A full-scale quantum computer using regular qubits would require an entire building for storing the cooling units. Recently, two groups, independently from Australia (Andrew Dzurak and Henry Yang from the University of New South Wales) and the Netherlands (Menno Veldhorst from the Delft University of Technology), have built quantum computers that operate at fifteen times higher temperature than before.

Instead of requiring dilution refrigerators that use isotopes helium-3 and helium-4, the system can be cooled using only helium-4. This is really cold (colder than space) and requires only thousands of dollars in refrigeration rather than millions. At higher temperatures, as described in the new research, control electronics could be placed right next to qubits on the same chip. This would reduce the costs of building quantum systems.
Qubit pairs are the fundamental units of quantum computing. Unlike a bit, however, it can manifest both states simultaneously, which is known as superposition.

The unit cell developed by Dzurak’s team comprises two qubits confined in a pair of quantum dots embedded in silicon. The result, scaled up, can be manufactured using existing silicon chip factories and would operate without the need for multimillion-dollar cooling. It would also be easier to integrate with conventional silicon chips, which will be needed to control the quantum processor.

Every qubit pair added to the system increases the total heat generated and leads to errors. This is why current designs need to be kept close to absolute zero. The prospect of maintaining quantum computers with enough qubits at temperatures much colder than deep space is daunting, expensive, and pushes refrigeration technology to the limit. The South Wales team, however, has created an elegant solution to the problem by initialising and reading the qubit pairs using electrons tunneling between two quantum dots—this is again a quantum phenomenon.

Google is building a device that will usher in a new era for computing. It’s a quantum computer designed to prove that machines exploiting exotic physics can outperform the world’s top supercomputers. The company’s goal, audaciously named Quantum Supremacy, is to build the first quantum computer capable of performing a task no classical computer can do. Google wants to claim the prize with just fifty-qubits.

Ion trap technology can be readily used to build a quantum computer by using individual atoms or ions. This is called an ion-based quantum computer. Kenneth Brown of Duke University, USA, says, “These basically have no memory error. Zeroing in on ion traps for quantum computing isn’t new but it has not received the same notice that semiconductor-based superconducting approaches have.”

Superconducting circuitry exploits the significant advantages of modern lithography and fabrication technologies. It can be integrated on a solid-state platform, and many qubits can simply be printed on a chip. However, these suffer from inhomogeneities and decoherence as no two superconducting qubits are the same, and their connectivity cannot be reconfigured without replacing the chip, or modifying the wires connecting them within a very low-temperature environment.

Trapped atomic ions, on the other hand, feature virtually identical qubits, and their wiring can be reconfigured by modifying externally applied electromagnetic fields. However, atomic qubit switching speeds are generally much slower than solid-state devices, and the development of engineering infrastructure for trapped ion quantum computers and mitigation of noise and decoherence from the applied control fields are just beginning.
India

India’s Department of Science and Technology (DST) has initiated a programme called QuEST (Quantum-Enabled Science and Technology) to help lay the groundwork for building quantum computers in India. As a part of the programme, it will invest a sum of eighty billion rupees in a span of five years to facilitate research in this field.

India has since joined the race for ‘Quantum Supremacy’ with DST for building the country’s own fifty-qubit quantum computer in the next four to five years. DST has already started working on a draft for the mission.

DST is also working on a major security application of quantum computing. This is related to RSA encryption—one of the most widely used encryption standards for secure communications that prevent third-parties from reading your private messages.

Breaking this encryption requires being able to perform billions of calculations and breaking down large numbers into their prime factors. This is precisely what quantum computers will be good at. In other words, the prime factorisation quantum algorithm can be potentially applied to overcome RSA encryption.

Once quantum technology goes mainstream, the most secure encryptions generated using today’s crypto algorithms could be broken into within a matter of seconds—something governments worldwide are scared about. Quantum changes computing in the most fundamental way since it provides exponentially more compute power.

The Quantum Learning Machine (QLM) of Japan is a specially configured classical computer designed to simulate quantum algorithms using up to forty qubits.

The UK government has recently provided seven and a half million pounds of grants for the development of a new quantum operating system called Deltaflow.

As a nation, we have computer architects and quantum information theorists. We have more people on the software side, and hardly any hardware person in the quantum computing area. However, we need all these people and also those running the electronics industry to translate the raw data from theoretical modelling into hardware.

Quantum computers are the next big step in computing technology. These use the fundamentals of quantum mechanics to process significantly greater amounts of information much faster than classical computers. It is expected that when the error-corrected and fault-tolerant quantum computation is built, scientific and technological advancements will occur at an unprecedented scale.

Quantum computers are very urgently needed in India to tackle large scale problems such as the creation of new medicines, complex cryptography, space applications, and many more. The suggested road map for acquiring and mastering the growing quantum technology is summarised below:

D. Raghu Ram has previously worked with Defence Research and Development Organization (DRDO) as a scientist. He has been awarded medal and citation by former Prime Minister Indira Gandhi for his contribution as Chief Design Engineer of Arjun main battle tank, which has been accepted by Defence Forces and has gone into production since then