How Robots And Drones Can Help Improve Services and Security

With growing need to address security threats across organisations, their security teams are becoming more focused, replacements are sought for repeatable tasks of detecting and monitoring. Such technology solutions as robots and drones are increasingly becoming capable of meeting these replacement needs.

Rapidly increasing power of the microprocessor, artificial intelligence (AI), machine vision, sensors, speech recognition and advanced mechanics has dramatically increased the speed and efficiency of the production and delivery systems that are using robots and drones. High-resolution sensors like magnetometers, gyroscopes, accelerometers and GPS modules have revolutionised smart drone technologies.

Robots in services, security and surveillance

Robotic surgery is one of the most important innovations of the medical field. A da Vinci single-port surgical system can help treat deep-seated damaged or diseased tissues or organs. 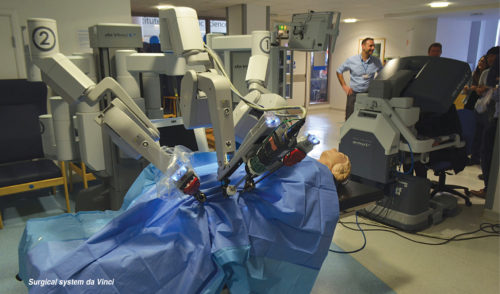 Robots like Saul are designed to fight diseases or eliminate viruses. It has been used to eradicate Ebola virus by using powerful pulses of highly energetic ultraviolet (UV) rays.

Wearable robots like Exosuit increase the wearer’s strength, balance and endurance with personalised control. Such robots help enhance the muscles of the physically-disabled to help them walk and climb. These also find applications in military.

Robotics in dairy farms have become a major industry, with thousands of robotic milking parlours already been installed worldwide.

Industrial robots have gained popularity for their productivity, efficiency and quality. Collaborative robots—also called cobots—work safely alongside humans. Smart sensors are connected to internal systems to collect production data, previously inaccessible to manufacturers. This also increases cybersecurity risks for manufacturers in their processes. So, these are required to ensure safe and reliable production and to improve product compatibility.

Robots are used for assembling products, space exploration, handling dangerous materials, spray-painting, cutting and polishing, inspection of products and other processes. The number of robots used in tasks as diverse as cleaning sewers, detecting bombs, robotic lawn mowers, retail and security, agriculture and logistics will continue to grow in the coming years. Robots would eventually be used in fast food restaurants.

Microbots help emergency responders explore environments that are too small or too dangerous for humans or larger robots. Robots powered with alternate sources like solar, wind and wave energy are used in areas that are off the grid. Robots inspired by living creatures, such as DelFly Nimble, serve to develop advanced technologies that have practical applications in surveillance.

In security environments, autonomous robots are being developed to collect and react to security-related information. These carry multiple visual and thermal cameras, gas sensors, two-way communication systems and so on. The robots are also empowering law and order agencies by giving an edge to smart workplaces.

Rather than using onboard systems that increase weight and demand more battery power, software allows streaming the videos back to an object-recognition server. This enables drones to analyse the terrain and act based on certain sets of predefined instructions using a GPS-guided mode. The biggest challenge in gaining commercial use of drones is the development of systems to prevent them from crashing into people or property, each other and, even more important, into manned aircraft.

Collision avoidance technology and algorithms for unmanned aerial systems (UAVs) will enable drone operators and businesses to rely on drone services. These systems fuse one or more of the following sensors to sense and avoid obstacles: vision, ultrasonic, infrared (IR), lidar, time-of-flight or monocular vision.

To overcome safety and privacy issues, there is a need to regulate the maximum height for flight, weather and time-of-day conditions for flight, and areas where flights may be prohibited such as near airports. Over the next few years, drone technology will become better in providing safer, more automated and quieter drones. Technologies that could transform future drone operations are IR cameras, GPS and lasers, hydrogen power, improved computer vision and motion planning.

Many of the latest drones have dual Global Navigation Satellite Systems (GNSS) such as GPS and Global Navigation Satellite System (GLONASS). Drones can fly in both GNSS and non-satellite modes. Highly accurate drone navigation is important for creating 3D maps, surveying landscapes and search-and-rescue (SAR) missions. These are used to display the current position and location of drones in relation to the pilot. These record the home point for Return To Home safety feature in drones.

Lidar, multispectral and photogrammetry sensors are being used to build 3D models of buildings and landscapes. Low-light night vision and thermal vision sensors are being used on drones to scan buildings and landscapes to assist in agriculture, firefighting and SAR. The software intelligently combines data from several different sensors such as a thermal camera and a regular RGB camera for the purpose of improving application or system performance of drones. This helps calculate accurate position and orientation information.

Nearly all drones have a ground station controller (GSC) or a smartphone app, allowing users to keep track of the drones’ current flight telemetry. This is also called First Person View (FPV). Some drones include No Fly Zone feature to increase flight safety and prevent accidental flights in restricted areas. This No Fly Zone can be updated or changed by manufacturers from time to time using firmware updates. Sometimes drones find locations from at least six GPS satellites. This allows them to fly in Ready To Fly Mode. Almost, all latest drones can use 2.4GHz or 5.8GHz as operating frequencies.

Latest drones have intelligent flight controllers and modes such as Follow Me, Waypoints, Active Tracking, Return To Home and others for a controlled drive. Gimbal technology allows for any vibration from the drones to not reach the camera. It allows tilting the camera while in flight, creating unique angles required for aerial photography, film or 3D imagery. Many are three-axis stabilised gimbals with two working modes—non-FPV mode and FPV mode—while some have 360-degree stabilisation. ActiveTrack technology enables the drone pilot to select another moving object, for example, a car, cyclist or another drone, and to follow it without assistance from a tracker chip or beam.

Water drones like PowerDolphin can find fish, lure it and perform troll fishing. Real-time detection underwater helps anglers accurately determine active fishing spots. Such drones are equipped with an intelligent sonar device and GPS waypoint function to draw underwater topographic maps. Underwater drones with 4k camera can dive up to 150 metres and are perfect for professional underwater filming. Also incorporated in the design are self-balancing and anti-current algorithms for best underwater performance.

The future of drone technology

Smart drones like Solo have more efficient motors, more accurate sensors, better onboard processors and software, advanced autopilot system and built-in compliance technology for safe, effective flight control, for new opportunities in transport and logistics. Smart sensors control and monitor the flight. These are guided by computer vision systems along with object detection and collision avoidance features. New forms of AI or algorithms make these even more adaptable.

Totally autonomous drones constructed of high-impact plastic, which makes them lighter and more robust, need no input or control from the pilot. These drones deliver data in real time once the destination or task is set. These can monitor fuel levels and watch out for damage to their propellers, cameras and sensors. Lightweight, long-lasting battery or power source is needed for such drones and other UAVs to enable them to fly for hours. LightCense is a new technology that uses visible colour blink sequence to create an identification system for drones. The code can be identified through smartphones using an app.

A self-monitoring system is important for the commercial viability of drones for the automatic delivery of goods or emergency services. This helps make sure that packages actually arrive at their intended destination. Industrial inspection, delivery, surveillance and agricultural applications are likely to be among the first commercial drone applications.