Are you familiar with the phrase “Big brother is watching you” from the novel Big Brother-1984 by George Orwell? In the context of modern technology, the concept of watching could be compared to a CCTV system or other intelligent sensor system in security applications.

As technology progresses, threats and vulnerabilities to human lives including national security also increases. CCTV surveillance systems and other intelligent electronic sensors are being installed in many establishments, industrial setups and high-risk security areas to monitor and guard against these threats.

There are different types of electronic security systems used for the security of the nation, home, babies, the elderly, banks, cybernet, mobile and so on. Even farmers are facing security issues. It is being reported that bugs and weeds have become resistant to chemicals, resulting in the use of more pesticides and herbicides. This means, higher cost to farmers, more damage to environment and increasing health concerns.

Covering all security issues and sensors is out of the scope of this article. We have trimmed the article down to a few security applications such as national, home, personal, industrial and cybersecurity. Simple to complex sensor hardware and software are involved in guarding against the threats to human lives, properties, financial services and personal privacy.

There is a wide range of national security systems to guard against rogue states and terrorism, and monitor weather reports and natural calamities such as cyclones, earthquakes and tsunamis.

A radar sensor is one of the most important electronics security systems. A radar transmits an electronic signal that bounces off objects and returns to the receiver for analysis. A radar sensor monitors areas such as national and international borders, military bases, airports, seaports, refineries and other critical industries. It detects movements at ground level, such as individuals walking or crawling towards a specific area, from a range of several kilometres. Radar sensor is also used in aircrafts, ships and submarines.

Satellite is another vital electronic system used in national security. Unlike radar, it is placed in an orbit above the Earth and uses cameras to take pictures of the Earth. Meteorologists use weather satellites and radars to monitor and forecast weather and atmospheric measurements, and provide important information on rain and snow, among others.

There are specialised electronic sensing equipment that are placed off shore and under seabeds to monitor earthquakes and tsunamis.

Recently, India and Israel held discussions regarding solutions to ensure security along international borders, using gadgets like electro-optical sensors and unmanned aerial vehicles (UAVs). Optical sensors like lidar (light detection and ranging) along with UAVs or drones could be used for efficient and reliable security applications. A lidar sensor mounted on a UAV along with sophisticated software can process images for analysis.

Building or buying a house of your dream may not be enough, unless you safeguard it using appropriate home security systems. Choosing and buying home security systems require certain considerations. There are many alarm sensors, CCTV systems and other security solutions available in the market.

Motion sensors and CCTVs are the two most common home security systems. Motion sensors are usually installed outside the house. These let you know if someone is walking around your house or premise. Motion flood lights trigger lights when these sense motion. A motion guard dog sounds like the barking of a dog when someone approaches—speed, volume and type of the bark may vary depending on how far the detected motion is.

There are different types of motion sensors available in the market, including passive infrared (PIR), ultrasonic and tomographic.

All warm-blooded creatures including humans emit IR radiation. A PIR sensor triggers a burglar alarm when it detects a human or an animal. It is common in indoor alarms.

These can be active or passive. Active ones emit pulses of ultrasonic waves and then measure reflected signals from a moving object. Animals can hear ultrasonic frequencies and so these signals may drive them away.

These emit radio waves and sense when those waves are disturbed. These can detect waves through walls/objects, and are often positioned in a way that creates a radio wave around the area. These sensors are useful for warehouses and large storage units.

Smart security systems work in a seamless environment and can be manipulated using customised rules. These communicate with one or more wireless protocols such as Wi-Fi, Z-Wave, ZigBee or a proprietary mesh network.

Whether you are alone, at home, travelling, at your workplace or in a group, there can be many security issues. Vulnerabilities and possibilities could come from smart TVs, computers, the Internet, smartphones and so on. The main goal of personal security alarms is to make a loud sound and attract attention in an emergency, and alert those nearby that the user is in danger. These gadgets are small, wireless, portable and easy to conceal.

Personal alarms are an excellent self-defence solution, especially for women and children. Some of these are small enough to fit in the palm of the hand or be attached to a keychain.

These electronic devices can be attached to almost anything. The sensor unit activates a loud alarm and flash light. These devices are lightweight, compact and portable, and can be used to scare off potential intruders and prevent robberies.

Electronic stun devices often come with multiple features, including flash LED light and strobe function, and deliver a powerful electrical shock siren to deter threats. These may also have safety pin ropes that prevent others from using the devices against you.

These are portable devices and can be worn around the neck by disabled people as a necklace or on the wrist as a bracelet. On pressing the button, these automatically call a number of landline or mobile numbers, one after another until the call is answered. The units then allow you to talk through the pendant or bracelet.

Use of microchips in livestock allows farmers to track animals. This technology can also be used for human beings. It can be particularly useful for parents who are concerned about the safety of their children. The microchip implanted in the child’s body can transmit information related to the location of the child and alert parents of any danger.

Apart from CCTV systems, there are other security systems meant for industrial setups and related establishments. Due to the variety and complexity of commercial setups and industries, it is important to go beyond basic physical security, from simple to very complex systems. Emerging technologies, Industry 4.0 and Industrial IoT have given way to many security threats, including cyber-attacks. Industrial security systems may include fire alarms, chemical sensors, access control systems, video surveillance units and intrusion detection systems, for a complete solution for protecting workers and their assets.

These are fingerprint access and time attendance control systems mostly found in industries, commercial establishments and offices. These use fingerprints to first register in the database for authentication.

RFID-based proximity access systems are normally used in offices, factories, banks and so on. These are inexpensive, quick and easy to use for door and gate entry systems. Sometimes these are even more effective than video surveillance.

These sensors are used in many security and military systems. Traditional sensors are complemented by new sensor types such as anisotropic magneto resistor (AMR), giant magneto-resistance (GMR) and giant magneto-impedance (GMI) sensors. These are used for the detection of ferromagnetic and conducting objects, navigation, position tracking and in anti-theft systems. 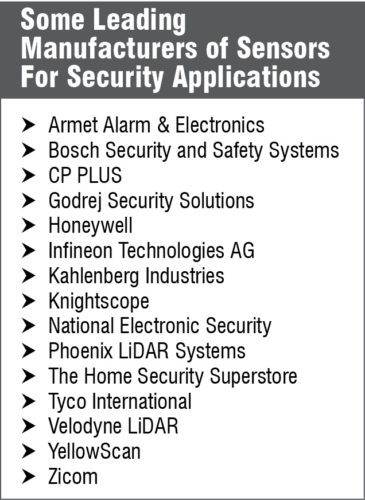 Knightscope K5 is a 1.8m (6-feet)-tall autonomous security robot, packed with sensors like lidar array and cameras. It moves about parking lot aisles, hallways/offices, stadiums and shopping malls on the prowl for suspicious activity. It can differentiate between a harmless passerby and potential criminal, and feed all that data to the cloud.

K5 is not meant to replace security guards. It is a fully-autonomous security data machine to fill blind spots. This robot can be deployed where human guards are not safe to patrol, including under dangerous bridges, crime-ridden public parking lots and camps.

Kahlenberg Industries is a leading manufacturer of sound signalling products consisting of pneumatic air and electric horns for marine, industrial and mass notification use.

Smartphones, tablets, personal computers, the Internet and smart TVs are now quite common, especially in big cities. Smart or Internet-connected TVs can recognise your face, listen to your voice and send information to third parties.

A smartphone can track your movements easily through signals. It is possible that retail stores track your every movement, gather data and monitor your behaviour by following Wi-Fi signals from your smartphone. Every time you log on to a computer, there could be a breach of privacy and confidentiality. Chances are that someone could be collecting your sensitive information.

Data brokering is an emerging industry that collects, analyses and sells personal information without the owners’ knowledge. Artificial intelligence (AI) packed with sensors and machine learning (ML) could be used in cyber security to minimise data theft and other malicious activities.

An electronic sensor system extends its application to various fields such as national defence, home, personal safety, office and industry. As crime rates increase, we feel unsafe unless we have appropriate electronic security systems in place.

Electronic sensors play an important role in security systems. While many of the present sensor technologies have greatly benefited society, these may not be sufficient because of evolving modern lifestyles and rapid technology developments. Some sensing technologies in security applications could be enhanced using robots and AI, especially in cybersecurity and privacy applications.