Staying in “TOUCH” When Far Apart

This is the generation where people get separated from their family and friends because of their work. Some even go to different countries. Even though there are ways through which they can keep in touch with their loved ones by means of video calling, phone calls and text messages, still they miss the feel of the presence of their family and friends. As a solution, here is the technology which literally enables them to feel the ‘sense of touch’. Also sensation of touch is the brain’s most effective learning mechanism — more effective than seeing or hearing.

Haptics is the science of applying touch sensation and control to interaction with computer applications whereas the technology which can transfer the feeling of touch over the internet is called “Sympathetic Haptics”. The feeling of one person is felt by a person situated at another terminal through this technology with the help of active-tracking and linking between computers. For instance, in a virtual environment, a computer user can actually feel as if he is holding an object with the assistance of data glove which will also be displayed on the monitor. The feel of holding the object is mimicked by the data glove in the user’s hand through the tactile sensations sent to it by the computer.

In this technology, a glove having sensors in a thimble-like device is used to send the sensation of touch over the internet and this device is accommodated at the tip of the fingers. It is linked between two personal computers through the Internet. This glove captures the softness or hardness being felt by one person and this sensed information by the data glove is converted into mathematical algorithms by software program within the computer and can be transmitted to another person who is situated at another terminal of the computer.

The feeling of a person at one end is sent to another person at the other end by using a sensing tool which follows a point on the computer screen that tracks and also transmits every sensations and movement of the other first person who is feeling. These sensations are transmitted in the form of exerted force and the position of the objects being touched.

“When the person receiving the sensation matches the movements of the person feeling the object, he not only understands how the person moved his hand but at the same time he feels exactly the kind of forces the other person is feeling,” Kesavadas explains.

Mr. Thenkurussi Kesavadas developed this innovative technology where he is the director of the University of Buffalo’s Virtual Reality Laboratories and associate professor of mechanical and aerospace engineering in the UB School of Engineering and Applied Sciences. He describes “You could watch Tiger Woods play golf all day long and not be able to make the kind of shots he makes, but if you were able to feel the exact pressure he puts on the club when he putts, you could learn to be a better putter”. 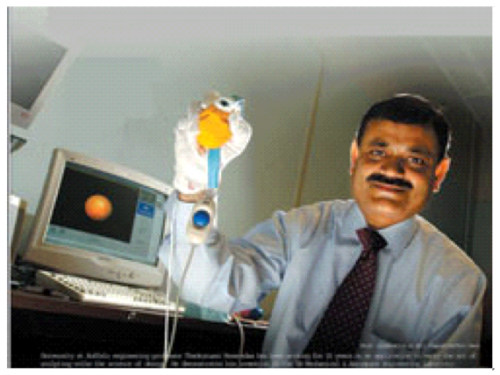 This technology enables to feel the contours and textures of material or a person situated far apart at the other end of the system by putting appropriate pressure.

In the world of teaching and learning, Sympathetic haptics is one of the revolutionary innovations. This new technology is a promising tool for teaching because it makes use of the sensation of touch for teaching which is much more effective on the brain than hearing or seeing with regards to learning mechanism.

The medical application of the technology holds a special interest for Mr.Kesavadas and his fellow researchers. In this regard, the researchers are exploring different means to communicate to the students of medical field where the students can learn the exact amount of pressure applied by a surgeon during the operation as he or she uses a scalpel to cut the tissue. And they hope that in the coming days, this technology could be employed for medical diagnosis where it allows the medical expert or a doctor to diagnose a human organ through the Internet by feeling it or check for an injury or a disease in an organ.

They are also thinking of the use of technology for the purpose of applications in the field of manufacturing where touch and pressure are involved, such as grinding or polishing.

According to Kesavadas, another advantage of this technology is the ability of the technology to acquire the sensation of touch of any activity after it has been transmitted, for the purpose of continual instruction and future replay. “It almost would be like one-on-one training,” Kesavadas says. “You could replay it over and over again. Hospitals could use it to deliver physical-therapy sessions to patients, for example.”