The electrical resistivity of a metallic conductor decreases gradually as its temperature is lowered. In ordinary conductors, this decrease is limited by impurities and other defects. So even near absolute zero, normal conductor shows some resistivity. On the other hand, in a superconductor, the resistance drops abruptly to zero when the material is cooled below its critical temperature. Thus, an electric current flowing through a loop of superconductor can persist indefinitely with no power source.

Superconductivity has been instrumental in bagging The Noble Prize in Physics five times for findings as listed in the table given below. 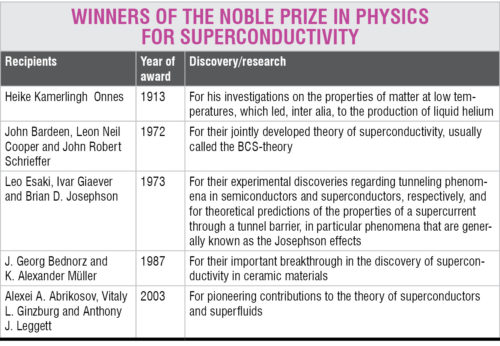 Superconductors are touted as one of the greatest discoveries of quantum physics. These are already being used for magnets in MRI machines, levitation transport and many other applications. Superconductors may one day fuel superfast computers, which will, of course, benefit intelligence agencies that need to process and analyse vast quantities of data.

Superconducting technologies may also pave the way for superior electrical grids and even magnetic levitation trains.

Superconducting electronics is of great interest for several niche applications, like ultrafast routers for communication networks, analogue-to-digital converters working in the microwave field and ultra-sensitive digital receivers, which have no counterpart in the semiconductor world.

Scientists across the world are investigating superconducting materials that could transform electronics in much the same way as silicon-based semiconductors did.

Superconducting materials offer less resistance than semiconductors, so currents flow much faster. Researchers intend to build software applications that will make it easier to design and develop superconducting networks to power future supercomputers capable of much faster processing with lower energy requirements.

Tools are needed to reduce the time and cost to design superconductor-based circuits, potentially revolutionising the computer and electronics industry. Therefore, to advance the science of superconducting, researchers have begun to build electronic design automation and technology computer-aided design (TCAD) tools that will make it simpler to blueprint circuits based on superconducting materials.

The programme’s short-term goal is to significantly reduce design time and increase the reliability of designs for complex circuits made of superconducting materials. The longer-term goal is to achieve a full, integrated design automation chain for digital-analogue hybrid circuits. By making it faster and easier to design such circuits, researchers intend to spur the widespread adoption of superconductor technologies.

Ultimately, the availability of design tools may foster very-large-scale integrated design of superconducting electronics, which can include millions or even hundreds of millions of components on a single chip.

Physicists found a way to control electrical transport through a superconducting material by building a device within it. Called Josephson junction, the device is analogous in function to the transistor in semiconductor electronics. It’s composed of two superconducting electrodes separated by about one nanometer—a billionth of a meter.

Circuits built from Josephson junctions are called SQUIDS, and used for detectors of extremely small magnetic fields, that are more than ten billion times smaller than Earth’s. However, these devices require low temperatures to operate, typically just 4 degrees above absolute zero. This requires intricate and costly cooling systems.

Nearly three decades have passed since the discovery of the first high-temperature superconductor, but progress in building electronic devices using these materials has been very slow, because process control at the sub-10-nanometre scale is required to make high-quality Josephson junctions out of these materials.

Further developments led to ceramic materials that become superconducting—that is, lose all resistance to electricity—at temperatures that can be easily achieved in the laboratory with liquid nitrogen. Discovery of high-temperature superconductivity has set off an intense effort to develop new kinds of electronics and other devices with these new materials.

In yet another development, physicists have found a new way to control the transport of electrical currents through high-temperature superconductors. Their achievement paves the way for the development of sophisticated electronic devices that are capable of allowing scientists or clinicians to non-invasively measure tiny magnetic fields in the heart or brain, and improve satellite communications.

This new approach will have a significant and far-reaching impact in medicine, physics, materials science and satellite communications. It will enable development of a new generation of superconducting electronics covering a wide spectrum, ranging from highly sensitive magnetometers for biomagnetic measurements of the human body to large-scale arrays for wideband satellite communications. In basic science, it could contribute to unravelling the mysteries of unconventional superconductors and play a major role in new technologies such as quantum information science.

Using focused helium beam to irradiate and hence disorder a nanoscale region of the superconductor to create the so-called ‘quantum mechanical tunnel barrier,’ researchers were able to write Josephson circuits directly into a thin film of the oxide superconductor. This direct-write method eliminated the lithographic processing and offered the promise of a straightforward pathway to quantum mechanical circuits operating at more practical temperatures.

Physicists are now collaborating with medical researchers to apply their work to the development of devices that can non-invasively measure tiny magnetic fields generated within the brain, in order to study brain disorders such as autism and epilepsy in children. In the communications field, they are developing wide-bandwidth, high-data-throughput satellite communications. In basic science, scientists are studying ceramic superconducting materials to determine the physics governing their operation, which could ultimately lead to improved materials working at even higher temperatures.

The superconducting-electronics community has seen a lot of new devices come and go without any development beyond basic characterisation. Superconductors have no electrical resistance, meaning that electrons can travel through them completely unimpeded. On the other hand, even the best standard conductors—like copper wires in phone lines or conventional computer chips—have some resistance, overcoming which requires operational voltages much higher than those that can induce current in a superconductor. Once electrons start moving through an ordinary conductor, these still collide occasionally with their atoms, releasing energy as heat. Superconductivity damps the vibrations of atoms, letting electrons zip past without collision.

Researchers are focusing on superconducting circuits made from niobium nitride, which has a relatively high operating temperature. That’s become possible with liquid helium. Cheap superconducting circuits could also make it much more cost-effective to build single-photon detectors—an essential component of any information system that exploits the computational speedups promised by quantum computing.

Researchers have developed a device called as nanocryotron, after the cryotron. An experimental computing circuit developed in the 1950s, cryotron was briefly the object of interest and federal funding as the possible basis for a new generation of computers, but it was eclipsed by the integrated circuit. Superconducting circuits are used in light detectors that can register the arrival of a single light particle, or photon; that’s one of the applications in which the researchers tested the nanocryotron. Researchers also wired together several circuits to produce a fundamental digital-arithmetic component called ‘half-adder.’

The nanocryotron—or nTron—consists of a single layer of niobium nitride deposited on an insulator in a pattern that looks roughly like a capital ‘T.’ But where the base of T joins the crossbar, it tapers to only about one-tenth its width. Electrons sailing unimpeded through the base of T are suddenly crushed together, producing heat, which radiates out into the crossbar and destroys niobium nitride’s superconductivity. A current applied to the base of T can thus turn off a current flowing through the crossbar. That makes the circuit a switch—the basic component of a digital computer.

After the current in the base is turned off, the current in the crossbar resumes only after the junction cools back down. Since the superconductor is cooled by liquid helium, that doesn’t take long. But the circuits are unlikely to top the 1GHz speed typical of today’s chips. Still, these could be useful for some lower-end applications where speed isn’t as important as energy efficiency.

Their most promising application, however, could be in making calculations performed by Josephson junctions accessible to the outside world. Experiments demonstrated that currents even smaller than those found in Josephson-junction devices were adequate to switch the nTron from a conductive to a nonconductive state. And while the current in the base of T can be small, the current passing through the crossbar could be much larger—large enough to carry information to other devices on a computer motherboard.

With the growing demand for cheap, small, invisible, efficient, reliable, no-vibrations and non-magnetic electronics, researchers are looking towards superconducting electronics. Superconducting electronics can provide devices and circuits with properties not achievable with any other known technology; very-low-loss, zero-frequency-dispersion signal transmission lines, very-high-Q-value resonators and filters, and quantum-limited electromagnetic sensors for radiation from DC through the millimeter-wave region and into the infrared. The newly discovered high-temperature superconducting materials could revolutionise electronics as their very interesting properties and device behaviour would lead to an operating temperature where cooling requirements are greatly reduced and where hybrid semiconductor-superconductor circuits can be built that use the best features of each technology.

A filter is an electronic circuit that selects some frequencies while blocking the rest. For instance, filters are used in radio sets to select the radio station users want to listen to; the radio set receives signals of all the stations, but the filter allows only the frequency of the selected station.