What drives the cogs of 3D? Read on find out the latest and the future in 3D technology -- DILIN ANAND 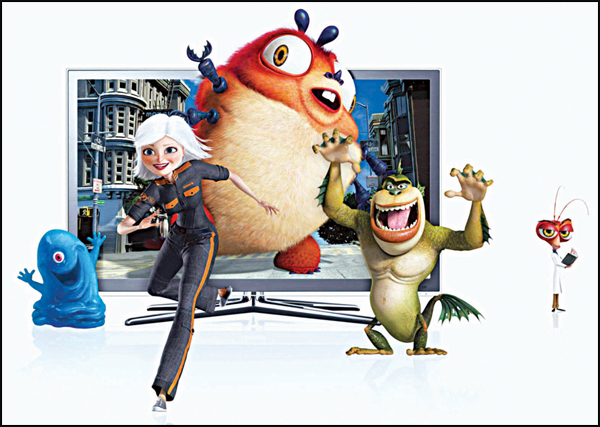 JUNE 2012: A standard TV set displays images and video in two dimensions (2D). It lacks the depth that forms the third dimension of viewing.

In real life, when you view an object, either eye sees a slightly different picture from the other due to a minute variation in the angle. The difference between the views of both eyes is greatest for objects closeup and tapers off for those farther away. Using that information your brain calculates the distance between you and the object, helping you perceive depth and see in three dimensions or 3D.

To create a sense of depth on the screen in 3D, videos are shot from two slightly different angles corresponding to the average distance between human eyes. In animated films, these ‘shots’ come from computer models that generate the two views. In live action, two cameras are used to record stereo video.

At the movie theatre: polarisation

Previously, the 3D effect was created by using colour to separate the image intended for either eye. It utilised the anaglyph method of encoding a 3D image in a single picture by superimposing a pair of pictures.

Current technology utilises a property of light known as ‘polarisation.’ In a cinema hall, the 3D projector uses polarised filters to project two images—a right-eye perspective displayed with clockwise-polarised light and a left-eye perspective with counterclockwise light. The audience wears special polarised glasses that allow only the right-polarity light to enter each eye. The brain receives the two different perspectives with different polarisations and assembles these to create an image that has depth.

At home: active and passive 3D

As a right-eye video frame flashes on the screen, the LCD over the right eye switches from opaque to transparent state. When the left-eye video frame appears, the right-eye LCD turns opaque again and the left-eye LCD becomes transparent. At any moment, you see only one perspective, through one eye. But the left and right video images alternate so quickly—at 120 hertz (times per second)—that you perceive a full 3D view. This illusion is possible due to persistence of vision.

What is not so great about this technology is that you have to wear glasses.

This technology does not require you to wear glasses but the 3D experience is nowhere close to that of active 3D technology.

Autostereoscopy is the process of displaying 3D images or stereo images without using specialised headgear. It is also known as glasses-free 3D and is the major technology used in 3D smartphones such as HTC EVO 3D and LG Optimus 3D, and portable gaming devices such as the Nintendo 3DS.

This technology uses the principle of parallax barrier to deliver different images to each eye. The latest and most convenient design does not have the physical parallax barrier in front of the pixels, but behind the pixels and in front of the backlight. Thus it doesn’t send different images but different light to the two eyes. This allows the two channels of light to pass through the pixels, allowing glare over the opposite pixels, giving the best image quality.